Arab lawmaker shouts at Jews on Temple Mount: ‘This is not yours, get out of here’ 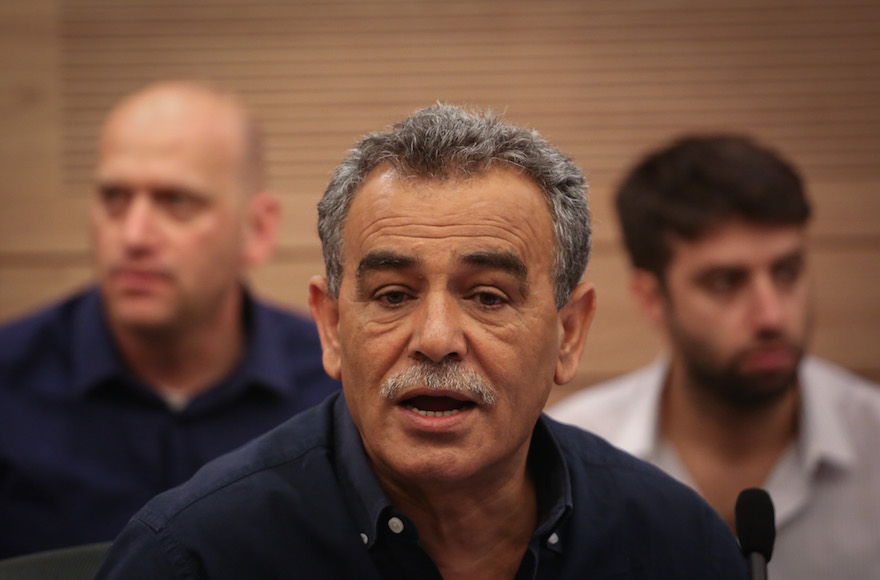 JERUSALEM (JTA) — An Arab-Israeli lawmaker verbally accosted Jewish visitors to the Temple Mount, as violence from the holy site spilled over into the West Bank.

“Crazy criminals, you’re all Kahanists, fascists, racists, get out of here, you hurt Muslims,” Jamal Zahalka, a Knesset member from the Arab Joint List, shouted Tuesday in an exchange captured on camera.

“This is not yours, get out of here, go home, you’re not wanted,” he also shouted.

The altercation came on the second day of the Jewish holiday of Sukkot, and following two days of clashes between Israel Police and security forces and Muslim protesters on the site.

Israel Police began banning Muslim worshippers under the age of 50 from the site after protesters began amassing rocks and other weapons in preparation for more violence.

Avigdor Liberman, the head of the right-wing opposition Yisrael Beitenu party, called for security officials to forcefully quell the rioting on the Temple Mount and called for Zahalka to be put on trial for attacking Jews and Israeli forces. He also said in a statement that Zahalka “should know that not only is the Temple Mount not his home or the home of his friends, but that the State of Israel in general is not their home.”

Meanwhile, in areas of the West Bank, Israeli soldiers clashed with Palestinian rioters protesting against the violence on the Temple Mount. Protesters near Ramallah in the northern West Bank threw rocks and firebombs at the soldiers. Protests also took place in Bethlehem, Hebron and Tulkaram. At least 12 Palestinian protesters were injured by Israeli forces during the Ramallah riots, the Palestinian Maan news agency reported.

Israeli police have clashed with Muslim protesters in and around the Temple Mount in recent weeks. Israeli Prime Minister Benjamin Netanyahu has said that Israel will maintain the status quo on the Temple Mount, under which Jews are allowed to enter the site but are not allowed to pray.