What Syria’s refugees think about Israel might surprise you 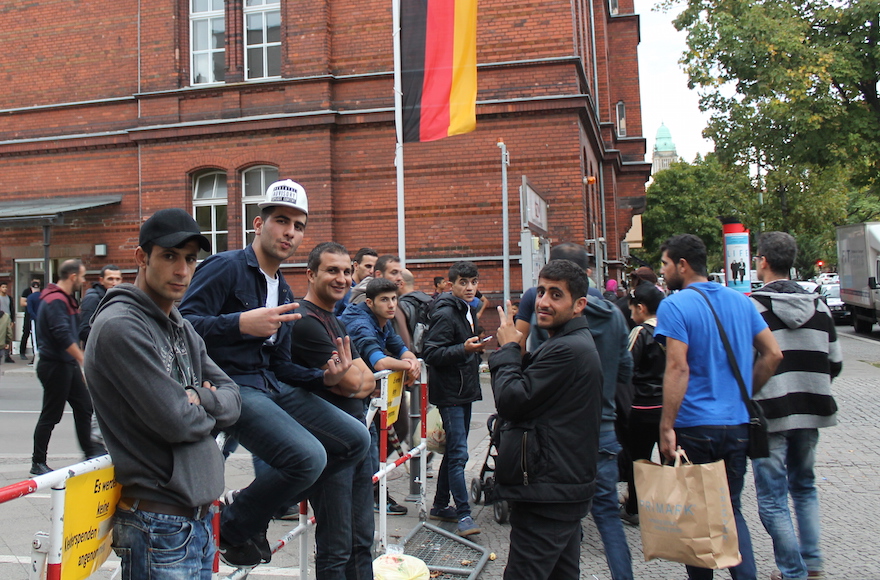 Germany is struggling to process and accommodate the 10,000 refugees streaming into the country every day. (Uriel Heilman)
Advertisement

BERLIN (JTA) – Israel’s government is in cahoots with Syrian President Bashar Assad. America wants to keep the Syrian civil war going for as long as possible. Russia is outmaneuvering the United States on the global stage.

Those are some of the viewpoints you’re likely to hear if you talk politics with Syrians pouring out of their war-torn country and into Europe.

When I went to Berlin recently to write about the wave of migrants arriving in Germany, one of the questions I was most curious about was something that had nagged at me since the regime of Syrian President Bashar Assad began bombing its own people back in 2011: Now that you see the true face of your government, do you look at its longtime adversary, Israel, any differently? Could the enemy of your enemy be your friend?

But when it came to their views on Israel, there seemed to be more conspiracy theory than political theory. And I was surprised (though I probably shouldn’t have been) that for many Syrians, the defining element of their identity is sectarian rather than national, and therefore they’re more concerned with the divides among Alawites, Sunnis, Shiites and Kurds than the divide between Arab and Jew.

“Israel and Bashar [Assad] – same-same,” said Khalid el-Hassan, a 17-year-old from the Syrian coastal city of Tartus who recently made his way to Berlin.

READ: Will German welcome of refugees come at Jews’ expense?

El-Hassan cited the quietude that for years prevailed along the Syria-Israel border and Assad’s repeated failure to respond to Israeli airstrikes in Syria both during the civil war and before it.

Emad Khalil, a 22-year-old law student from Aleppo, repeated a myth that is widely accepted as fact across the Arab Middle East: that the two stripes on the Israeli flag represent the Nile and the Euphrates rivers, and the Star of David is a sign that the Jews seek to control all the land in between, from Egypt to Iraq.

“You come to visit Syria, OK. You come to take our land, not OK,” he said. 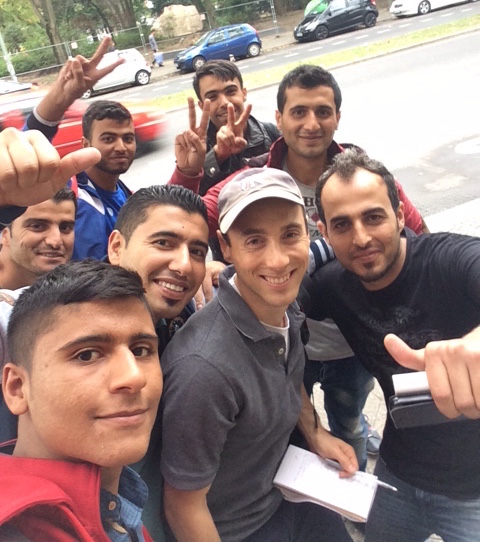 Some of the Syrian refugees interviewed in Berlin insisted on taking selfies with JTA’s Uriel Heilman, in Yankees cap. (Uriel Heilman)

When I told Khalil the myth about the flag had no truth to it, he shrugged.

“I saw it on a documentary,” he said.

To be sure, I heard a range of viewpoints expressed, from the Syrian Kurd who was curious about teachers’ salaries in Tel Aviv to the bereaved Syrian mother who asked me why, if we’re all children of Adam and Eve, can’t we just get along?

To my Western ear, many of the Syrians’ convictions sounded outlandish, incoherent or ignorant. I mostly suppressed the urge to argue, however. My aim wasn’t to convince them why they were wrong, but to get a sense of how they see the world.

Given their experiences over the past four-plus years of civil war, the Syrians I met were less interested in talking about Israel than what they said was the West’s failure to help them.

Hadiya Suleiman, 45, a native of Deir ez-Zur in eastern Syria whose 18-year-old son was killed by a roadside bomb she said was rigged by ISIS, said she and other Syrians were happy when President Barack Obama was elected. But his inaction following the Syrian revolution changed her mind.

“I think what’s happening now is Obama’s responsibility; if Obama wanted he could stop the war,” said Suleiman, who has five surviving children.

Suleiman accused the “Jewish lobby” in America of thwarting any action on Syria, saying that U.S. policy favors seeing the civil war drag on so that the Syrians continue killing each other. She also blamed the rise of ISIS on America’s mismanagement of its invasion of Iraq.

Idris Abdulah, 30, an unemployed Syrian Kurd who came to Germany a year ago, said it wasn’t fair to blame America for ISIS; he fingered Assad for creating the ISIS problem by releasing Islamic militants from Syrian prisons shortly after the outbreak of the civil war. But Abdulah said America’s failure to act decisively in Syria shows American weakness, especially in contrast to Russia.

He added, “We all hate the American government because it’s not doing anything for the Syrian people even though it can. We don’t hate American people.”

Then he offered me the hot cup of tea a friend had just thrust into his hand.

El-Hassan said he was disappointed by the shoddy welcome Syrian refugees have received in Europe — especially given Syria’s “magnanimous” welcome of refugees in decades past from Iraq, Lebanon and Palestine. Until he reached Germany, el-Hassan said, he encountered mostly hostility, from the Hungarian guards who beat and detained him to the Serbians who refused to provide lodging and other assistance.

When I asked why Persian Gulf states weren’t taking in Syrian refugees, the answer was straightforward: “The Arabs don’t love us,” el-Hassan said. 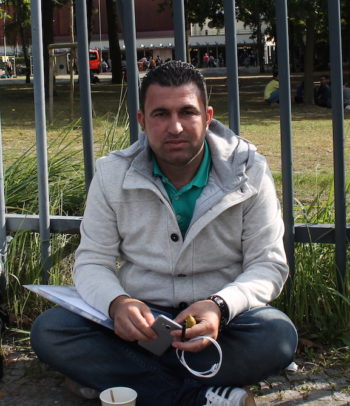 Idris Abdulah, a Syrian Kurd who arrived in Germany in 2014 and still hasn’t found a job, says he hopes one day to work helping refugees like himself. (Uriel Heilman)

Abdulah said he believes Gulf countries like Saudi Arabia are afraid that incoming Syrian refugees could destabilize their tightly controlled societies by pushing for more freedoms.

So far, Syria’s Muslim neighbors have borne the brunt of the Syrian refugee crisis. Approximately half of Syria’s 17 million citizens have been displaced by the civil war. Aside from the millions who have been internally displaced, some 2 million have gone to Turkey, more than 1 million have fled to Lebanon, over 600,000 have found shelter in Jordan and about 250,000 have gone to Iraq.

Many of those countries have balked at taking in more Syrians due to dwindling international funding for Syrian refugees and concerns about the destabilizing effect of an even greater influx.

When Chancellor Angela Merkel of Germany announced six weeks ago that her nation would take in 800,000 asylum seekers, it prompted a fresh wave of Syrians to risk the perilous journey to Europe. (By contrast, the United States has accepted 1,500 Syrian refugees over the past four years. The Obama administration announced in September that by 2017 it would increase the number of asylum seekers it accepts annually to 100,000 from 70,000. That figure includes not just Syrians but refugees from all over the world.)

Syrians aren’t the only ones heading to Germany. The refugee camps I visited in Berlin are full of Iraqis, Pakistanis, Eritreans and citizens of too many other countries to count – including Russian speakers from Central Asia. Some are fleeing war, violence or repression, but many are economic migrants seeking better opportunities. It’s a point of consternation for many of the Syrians, who accuse others of misrepresenting the dangers they face back home – and even acquiring fake Syrian identity papers – in an effort to be granted asylum in Germany.

Despite her hopes for a new life in Germany free of war and peril, Suleiman said she’d go back to Syria in a heartbeat if the war ended. But there may not be much to go back to.

“For 10 years I worked to build a house, and now it’s all crushed by Assad’s bombs,” she said. “I tried living under ISIS control, but anybody who said anything that disagreed with ISIS was beheaded.”

Suleiman said she tried to gain admission to Kuwait, where her husband has worked for the past 13 years, but she was denied entry. The same thing happened when she tried Saudi Arabia. Now she has one child in Austria and four with her in Germany, where she arrived in late September.