In Putin’s policing of Middle East, some see a boon for Israel 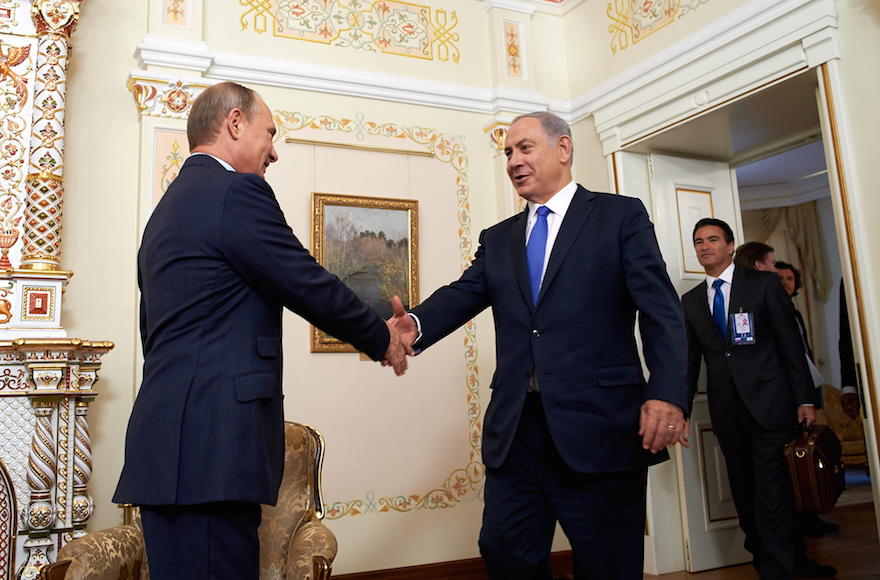 The deployment last month of Russian warplanes in Syria laid bare Moscow’s readiness to use force to punish leaders who would challenge its authority — as in Ukraine, from which it annexed Crimea in March 2014 — and to defend its strategic allies, like Syria’s embattled president, Bashar Assad.

During the Cold War, Kremlin intervention generally meant bad news for Jews, who were second-class citizens, of sorts, in the Soviet Union — and for Israel, which the USSR regarded as an extension of its American rival. But observers of Russia’s current bid for greater influence in the Middle East say it may be a boon for Israel, which has strived in recent years to stay on the good side of Russian President Vladimir Putin.

“The main risk for Israel is not Assad but chaos” amid Syria’s bloody civil war of the past four-plus years, Ksenia Svetlova, a Moscow-born Israeli Labor party lawmaker, told JTA. “If the Russian deployment prevents it, then it can be a positive development.”

As Russia began beefing up its presence in Syria, Israeli Prime Minister Benjamin Netanyahu traveled last month to Moscow in an effort to avoid Russian-Israeli military entanglements in or over Syria, where Israel routinely retaliates for cross-border rocket attacks or goes on the offensive to eliminate certain types of weaponry. (“We are neither for nor against Assad,” The Economist quoted Netanyahu as saying during the Sept. 21 meeting.)

Netanyahu reportedly was satisfied with the outcome of the meeting, in which he discussed with Putin ways to avoid clashes with Russian troops during its retaliatory missions in Syria. Further high-level talks on Syria are scheduled to begin between Israel and Russia later this month, Israel’s Army Radio reported last week.

Netanyahu’s visit, and the understanding reached while in Moscow, speaks to his government’s broader policy of neutrality on Russia, which has set Israel apart from most Western countries. Last year, the United States, European Union, Canada, Australia and Japan introduced several rounds of trade and other sanctions on Russia.

Roman Bronfman, a former Meretz party lawmaker in Israel and prominent Russia analyst who was born in what today is Ukraine, lamented Netanyahu’s “recognition of Russian dominance by flying to Moscow, naming it the boss in another insult to Israel’s true ally, America.”

The Netanyahu trip to Moscow contrasted sharply with the U.S. position on Russia’s efforts. Last week, U.S. Defense Secretary Ashton Carter said that Russia’s military moves were “pouring gasoline on the fire” because Russian strikes reportedly have targeted U.S.-backed rebels — not the Islamic State terrorists that Moscow had singled out as the target of its operation.

To Bronfman, Russian deployment in Syria also means “opening a corridor for more presence on Israel’s borders by Iran and Hezbollah.” Syria, he explained, is after all a close ally of both the Islamic Republic and the Shiite militia. 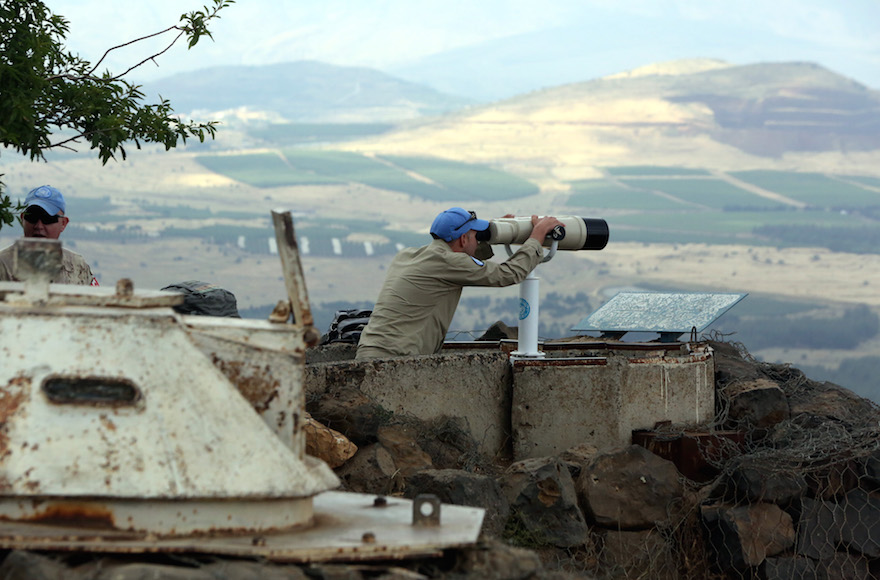 A United Nations observer atop Mount Bental on the Israeli side of the border with Syria, May 30, 2015. (Yossi Zamir/Flash90)

The Netanyahu-Putin meeting demonstrated just how far ties between Israel and Russia have progressed since the Cold War, according to Mark Galeotti, a Russia analyst and professor of global affairs at New York University. For its part, Russia perceives Israel as a rare island of stability, he said.

To be sure Russia, which is the world’s second largest weapons purveyor behind the United States, is still arming Israel’s enemies, Iran included. But now Russia also buys Israeli arms, including drones. It also acts as a mediator for dialogue between Israel and parties with few or no Western contacts, such as the Assad regime and Hamas.

Russia’s intervention in Syria comes as the United States scales back its military presence in the Middle East as part of President Barack Obama’s policy of emphasizing diplomacy over force.

READ: Putin’s Jewish embrace — is it love or politics?

But Putin’s challenge to the West, observers say, lies not so much in its protection of the Assad regime but in his creeping influence with Iran and some American allies in the region, such as Egypt, Saudi Arabia and even Israel. In recent months, Russia has been wooing Cairo, Riyadh and Tehran — resulting in economic agreements on sharing nuclear energy and know-how with Saudi Arabia, and selling advanced weapons to Iran. Putin also invited Egypt to join the Eurasian Economic Union, Russia’s free-trade zone that now comprises only ex-members of the former Soviet Union.

“What is happening between Russia and Egypt, as well as Saudi Arabia, is indeed a new development that is meant to occupy the vacuum left by U.S. non-intervention, or the perception of it,” said Svetlova, the Israeli lawmaker and a former journalist specializing in the Arab-speaking world.

Netanyahu’s meeting with Putin coincided with Russia’s increased influence in some Arab countries with rulers who disapprove of Obama’s support for the Arab Spring revolutions and the nuclear agreement with Iran. Supporters both of Syria’s Assad regime and Egypt’s government led by Abdel Fattah el-Sisi in recent months have been displaying posters of Putin in Damascus and Cairo, where many now see him as a hero.

Meanwhile, the Saudi government criticized the U.S.-led nuclear agreement with Iran before ultimately giving its lukewarm consent to the deal.

And el-Sisi has had harsh words for Obama, who supported the revolution that in 2011 toppled the regime of Hosni Mubarak, a predecessor of el-Sisi.

“You left the Egyptians, you turned your back on the Egyptians,” el-Sisi said in 2013 of the Obama administration, “and they won’t forget that.”