In European coverage of Israel, confusion over who is attacking whom 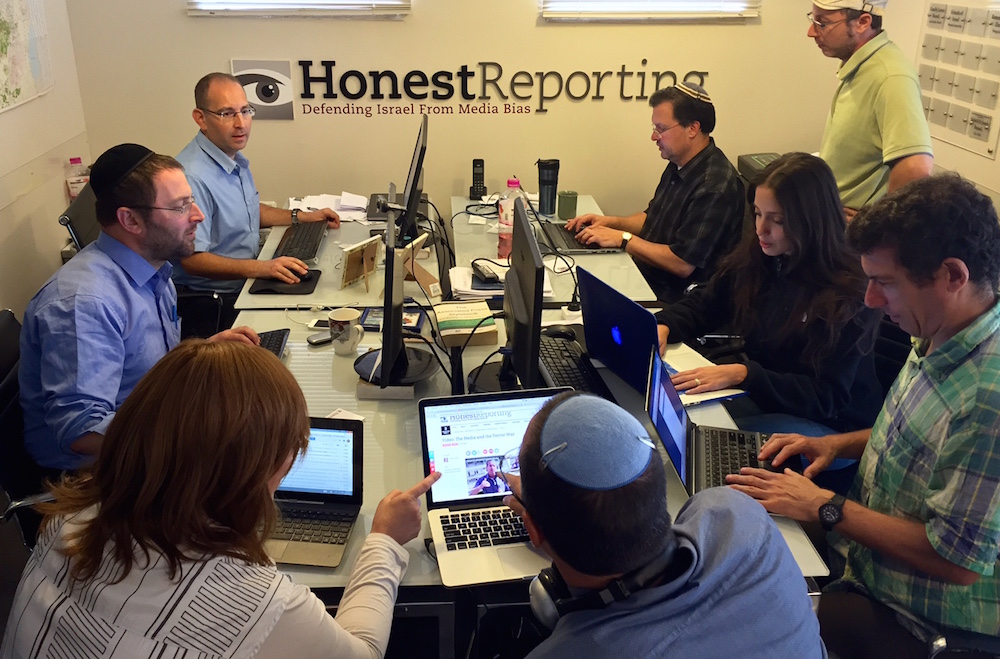 (JTA) — At an Israeli bus station, several uniformed officers surround an Arab woman before opening fire on her, dropping her to the ground. Standing over her motionless body, a Border Police officer toting an automatic rifle speaks into a radio while another officer chases away a bystander documenting the scene on his cellphone.

That’s how the Dutch public broadcaster NOS presented an Oct. 9 incident in the northern Israeli city of Afula in which Israeli officers shot and arrested Asraa Zidan Tawfik Abed, an Arab-Israeli woman from Nazareth who the police said had tried to stab a soldier at the city’s main bus station.

NOS used only 13 seconds of the 52-second cellphone video, dispensing with footage that showed Abed holding the knife aloft and making stabbing motions while officers shouted at her to drop the weapon. The full video also showed Abed alive despite being shot.

Marcel Gelauff, the chief editor at NOS News, defended his network’s coverage of the incident, telling JTA that it was not aiming to provide “a clear and detailed picture” of what transpired, but rather “an impression of a few events.” Gelauff added that NOS regularly receives complaints of perceived bias from both sides and noted that the title of the segment, “Violence in Israel is expanding,” demonstrates that “we are dealing with growing violence from both sides.”

READ: The Matisyahu affair: In Europe, conflating Jew and Israel

But critics of European media coverage of Israel say the choice not to show the full video is emblematic of how missing or misleading context distorts public perceptions of the recent upsurge in violence in the region — mostly to Israel’s disadvantage.

“No media in Europe have recognized who’s attacking whom, to my knowledge,” said Simon Plosker, the Israel-based managing editor of HonestReporting.com, which monitors international news coverage of Israel. “Palestinians who are carrying out the attacks are being portrayed as victims who are presumably being driven to desperate measures by Israeli policies.”

On the website of London’s Daily Mail, a right-leaning tabloid, the Afula footage was presented under the headline “Amateur footage shows Palestinian woman executed in Afula,” though “executed” was later changed to “shot.” The paper posted 39 seconds of the video — enough to show the standoff with Abed, but not enough to see that Abed was still alive after being shot.

The BBC also changed a headline in its coverage of the recent violence. The story was about a Palestinian who was killed by Israeli security forces after stabbing two Israelis to death. Initially the headline read “Palestinian shot dead after Jerusalem attack kills two.” Following complaints, the BBC changed it to “Jerusalem: Palestinian kills two Israelis in Old City.”

Salomon Bouman, a former Israel correspondent for NRC Handelsblad, a daily considered to be the Netherlands’ newspaper of record, attributed the problem in Europe to a scaling back of coverage of Israel in general.

The extent of reporting on Israel has “diminished considerably in Europe because of local problems, such as the refugee issue,” Bouman said. And while “concern over the arrival of hundreds of thousands of Muslims resulted in more sympathy for Israel on the one hand, the de-prioritization of news about Israel leads to shorter pieces with less context, which to some extent comes at Israel’s expense in the final product.”

During the last wave of Israeli-Palestinian violence, in 2014, coverage in Europe was more balanced than it has been of late, Plosker said. During the earlier round, European and other foreign journalists reported extensively — at least initially — on the targeting of Israeli civilians by Hamas, which was clearly portrayed as the aggressor.

But in coverage of the recent spate attacks — much of it perpetrated by lone Palestinians armed with knives rather than organized terror groups — “perpetrators are not seen as affiliated with either Fatah or Hamas, just desperate people who are being portrayed as taking desperate actions with the only weapons they have access to,” Plosker said.

Compared to the European media, American news coverage has been more mixed, Plosker said. Some U.S. media reported what Plosker deemed an accurate cause-and-effect scheme, but others led with headlines that emphasized the victimhood of Palestinian assailants. On Oct. 10, the Los Angeles Times website carried the headline “Four Palestinian Teens Killed In Israeli Violence, which was later changed to “6 Palestinians dead as violence grips Gaza, Jerusalem.”

In Norway, the online edition of the country’s second-largest newspaper, Verdens Gang, informed its readers on Oct. 10 that “a Palestinian was killed in East Jerusalem” in the headline of an article that also noted that the Palestinian died while stabbing a Jew.

To Eric Argaman, a pro-Israel activist from Oslo, the trend in coverage shows that some European media outlets will “do anything” to fit the facts to an enshrined narrative of Israeli aggression.

“I don’t blame Norwegians for being one of the most anti-Israel countries in Europe,” Argaman said. “The right to the truth has been robbed from the public.”