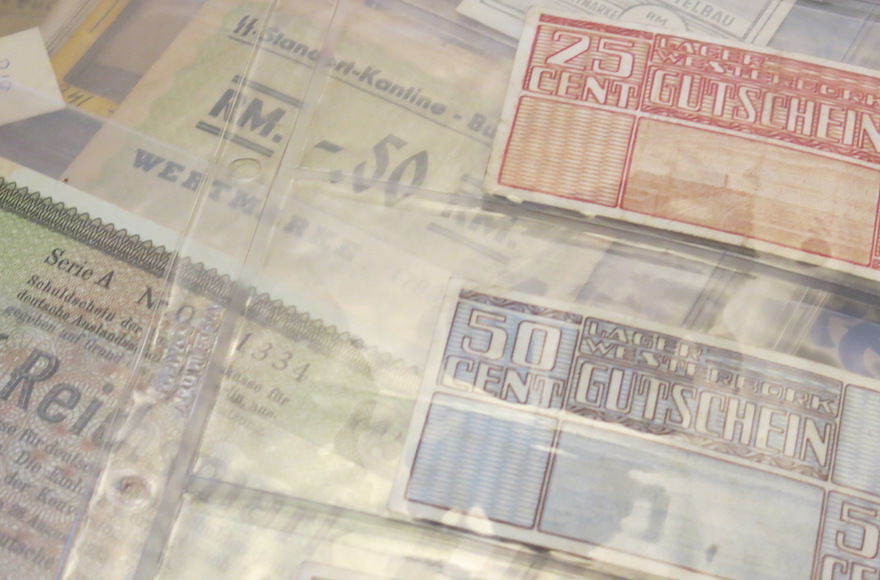 WORCESTER, Mass. (JTA) – In the 70 years since the fall of the Third Reich, the trappings of Nazi power have become infamous icons of evil — think of the swastika flag, the yellow badge or the striped concentration camp uniform.

But have you ever heard of “Holocaust money,” the currencies that the Nazis forced on Jews and others in concentration camps and ghettos?

If not, you’re not alone. Even scholars have largely neglected the subject.

“It’s a mystery to me,” said Deborah Dwork, a professor of Holocaust history at Clark University here, regarding why there isn’t more contemporary research on the currencies. 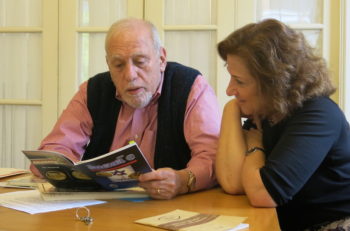 Dwork hopes to change the situation. The university’s Strassler Center for Holocaust and Genocide Studies, which she directs, is making a newly acquired collection of the notes and coins available for study this fall.

“Clearly this is an under-researched area,” Dwork said. “It is a salutary reminder that we think we know so very much, but there are areas about which we know very little.”

Robert Messing, an amateur numismatist, or currency expert, who graduated from Clark in 1959, donated the collection last spring. The university and the Strassler Center have funded Marisa Natale, 20, a junior studying history, the Holocaust and genocide, to research the collection and consider how students may be able to use it.

The first known use of Holocaust money was in the Lodz ghetto in Poland in 1940. Over the next five years, the Nazis introduced currencies in concentration camps and other ghettos in Germany and occupied Poland, Czechoslovakia and the Netherlands. Each camp or ghetto had its own currency — with unique denominations and designs — to be used only within its gates.

Natale said Holocaust money was part of a complex economic system that served to strip European Jewry of its resources and further the Nazis’ genocidal aims. Jews could redeem the money under Nazi regulations or through black markets for food, clothes and other goods.

In concentration camps, Nazi officials and some factory owners paid Jewish slave laborers “bonuses” in the currencies to make them work harder. Thousands of Jews were worked to death during the Holocaust. 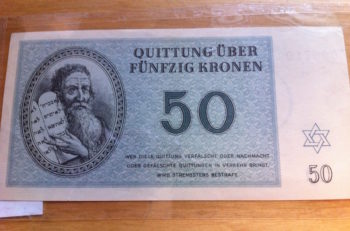 A 50-krone banknote from the Theresienstadt concentration camp that is part of the Strassler Center’s collection of Holocaust money. (Courtesy of Clark University)

In ghettos, currencies served to compensate Jews when Nazi officials confiscated their valuables and cash. While ghetto residents relied on food rations, there was never enough to eat, and cash could be the difference between life and death. Coins in the Lodz ghetto were made of a flammable alloy and sometimes used as fuel.

The ghetto currencies also served to mark the Jews who carried them, putting them at risk if they left the ghettos, where they were legally required to stay.

Banknotes from the Theresienstadt concentration camp are included in the Strassler Center’s collection. Both the blue 50-krone notes and the pink 100-krone notes feature an image of Moses, bearded and holding the tablets of the Ten Commandments, and a stylized Star of David.

The notes were designed by a Theresienstadt inmate named Peter Kien, Natale explained. Nazis officials forced Kien to alter his original design to make Moses look more stereotypically Jewish and, ironically, to make his hands cover the commandment “Thou shalt not kill.”

Handling notes and coins from the Holocaust, Natale said, brings the reality of the genocide home for her. She predicts the Holocaust money will resonate with other students as well.

“We all use money. People held it in their in hands as part of their everyday lives. It connects people throughout time,” she said.

Much of Natale’s knowledge of Holocaust money comes from reading copies of Shekel, a magazine published by the American Israel Numismatic Association. Issues of the magazine and other documents were donated along with the currency collection by Messing, a founding member of the association. 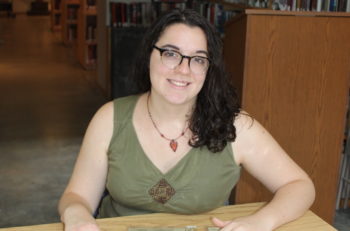 Marissa Natale is researching a new collection of Holocaust money for Clark University and considering how students may be able to use it. (Courtesy of Clark University)

First drawn to the subject because he lost family members in the Nazi genocide, Messing has now spent nearly 50 years researching, collecting and writing about Holocaust money. He donated his collection in hopes that it will become another symbol of the Nazis’ crimes — and one that people can hold in their hands.

“It’s a real artifact that said these horrible things did happen,” he said.