How a Holocaust legacy helped launch the Kind bar brand 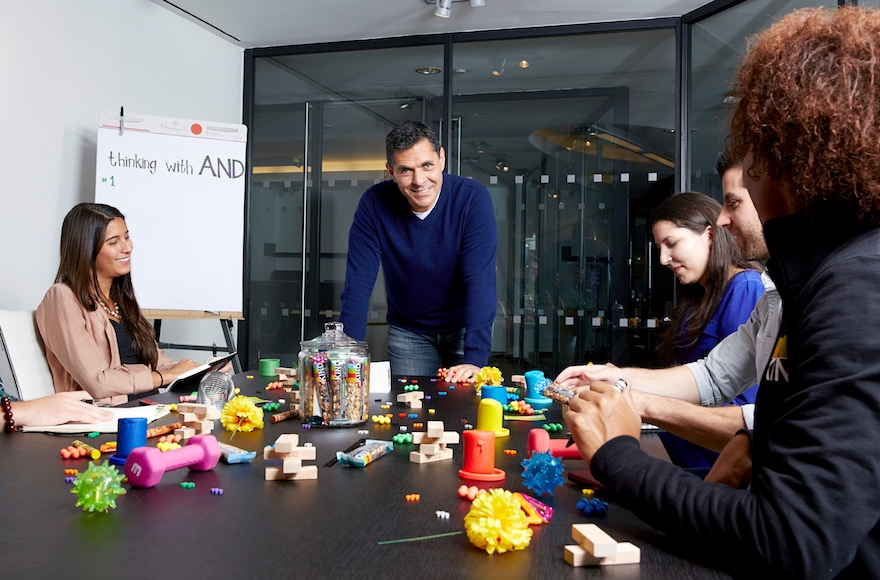 NEW YORK (JTA) — In many respects, the Manhattan headquarters of Kind Snacks — the purveyors of the omnipresent fruit and nut bars found everywhere from health-food stores to office-supply emporiums — are pretty much what you’d expect: Scads of casually dressed millennials mill about sleek, brightly colored rooms adorned with inspirational quotes from the likes of Desmond Tutu and Groucho Marx.

But step into the office of founder and CEO Daniel Lubetzky and there’s a different vibe. The furniture is older, and a Time magazine cover on one wall featuring the face of Anwar Sadat stands out. Lubetzky tells JTA that his desk and the artwork on the walls belonged to his late father, a Holocaust survivor who had a deep effect on his life and business philosophy.

Make no mistake, however — Lubetzky, 47, is far from somber; he speaks with confident charisma with a trace of a Mexican accent. In just over a decade, he has built Kind into one of the most ubiquitous healthy snack brands in the United States. In 2014, the company sold more than 458 million bars and granola pouches, nearly doubling the sales of the previous year.

But Lubetzky isn’t motivated by profit alone. In March, he published “Do the KIND Thing,” a part-memoir, part-handbook for incorporating social responsibility into business ventures. The book, which made The New York Times’ business best-sellers list, chronicles Lubetzky’s story starting from his childhood in Mexico City to a stint in Israel, where he toiled to get Arabs and Israelis to work together, to a studio apartment in New York, where he struggled for years to get his company off the ground.

Lubetzky credits his father’s Holocaust stories for inspiring his drive to be socially responsible and promote kindness.

For instance, as a child in the Dachau concentration camp, Lubetzky’s father was given a rotten potato by a Nazi guard who would’ve been punished if he had been seen helping a Jew. Lubetzky’s father credits the potato — and the guard’s actions — with helping him survive.

Drawing on the anecdote, Kind Snacks donates $10,000 each month to a social cause that is nominated and voted on by customers online. Employees also carry “kindawesome” cards that they give to strangers in public for spontaneous acts of kindness. Each card comes with a code through which the recipient can claim a few free Kind bars and more kindawesome cards to pay it forward to others.

Lubetzky hinted in non-specific terms that he plans on scaling up this so-called “Kind movement” to match the company’s overall growth.

While he may be a snack-bar guru today, that’s not what Lubetzky set out to be. He grew up in the “very insular and very tight-knit” community of Mexico City, which is home to about 75 percent of the country’s approximately 50,000 Jews.

Lubetzky was 12 when he realized how Jew-centric his upbringing was. He was playing with a friend.

“I said something like ‘If you don’t stop doing that, I’m going to kick your tuchas.’ And he said, ‘What is tuchas?’ And I’m like, ‘What are you talking about?’” Lubetzky recalled. “I thought tuchas was a word in Spanish.”

Thus a desire to build bridges between communities was born. As an undergrad at Trinity University in San Antonio, Texas, Lubetzky wrote a thesis on how economic cooperation could bring nation-states — such as Israel and its surrounding Arab neighbors — closer together.

“If you had asked me when I was in law school or in college or as a kid, ‘Is Daniel going to be running a food company?’ I would tell you you’re cuckoo,” Lubetzky said. “What I was going to be doing was representing Israel at the United Nations.” 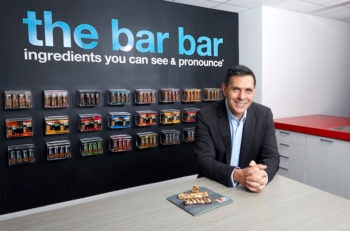 Daniel Lubetzky in the kitchen area of the Kind Snacks office in New York City with the many flavors of his company’s bars on display. (Poon Watchara-Amhaiwan)

But after law school at Stanford, Lubetzky received a $10,000 fellowship given out by the Bay Area’s Jewish federation to pursue economic research in Israel and attempt to foster joint Arab-Israeli ventures. One day in a grocery store, he came across a jar of sundried tomato spread that he devoured in one sitting. When he went back to buy more, he was told that there was none left because the company was going out of business.

Recognizing an opportunity, Lubetzky tracked down the spread’s manufacturer, Yoel Benesh, who was using expensive jars and other imported materials from Europe. Lubetzky convinced him to work with local Palestinian farmers and an Arab glass manufacturer in Egypt.

Lubetzky and Benesh built up the company and turned it into PeaceWorks, which still sells tapenades and sauces today. Its trademark: “Cooperation Never Tasted So Good!”

As Lubetzky describes in amusing detail in his book, his efforts to expand PeaceWorks did not go as he expected. At one point in the 1990s, he wound up having to store thousands of unsold boxes of Dead Sea mineral ointments in his small Manhattan studio apartment.

“What kept me going was my sense of mission: I was in this to build a footing for peace,” Lubetzky wrote. “I had to help my Israeli, Arab, and Turkish partners. Failure was not an option.”

Years later Lubetzky came up with the idea for the minimalist fruit and nut Kind bars — one of the first products to eschew the “paste” formula of other snack bars — while craving a filling snack that could sustain him through his training for the New York Marathon in 2002.

He said his early obstacles with PeaceWorks helped him learn that the quality of a product is more important than the social mission of a business. Kind does not outwardly promote its charity work as publicly as it pushes its products’ taste and health value; the company touts its clear packaging as proof that customers can see the wholesome ingredients inside.

Authenticity is the main thing that should drive a business and its mission, Lubetzky said.

“If [companies] can find something that they can really authentically do to make this a better world, why not?” he said. “But you have to really have a huge asterisk there — it has to be authentic.”