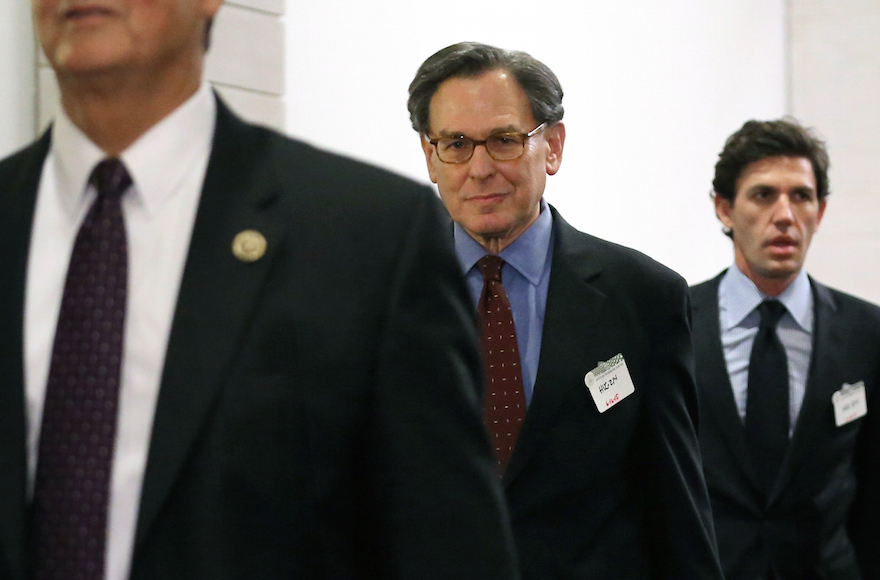 Sidney Blumenthal arriving to be deposed by the House Select Committee on Benghazi in the House Visitors Center at the U.S. Capitol in Washington, D.C, June 16, 2015. (Chip Somodevilla/Getty Images)
Advertisement

Sidney Blumenthal’s name came up 49 times in a hearing convened Thursday by the special congressional committee investigating the deadly 2012 attack on the U.S. consulate in Benghazi, Libya.

Why? Well, the star witness was Hillary Rodham Clinton — the secretary of state at the time of the attack, whom Blumenthal has advised for years. Republicans on the committee alleged that when it came to Libya, Clinton relied on her old (and liberal) adviser for counsel to the exclusion of the professionals who worked for her at the State Department.

(Vox has gone into great detail on how Blumenthal earned his status as a bogeyman to the GOP.)

Democrats — with more evidence — sought to portray the hearing, the eighth on Benghazi, as part of a GOP crusade aimed at derailing Clinton’s Democratic presidential campaign.

Still, it’s clear that Clinton listened to, and at times solicited, advice from Blumenthal on a range of issues, domestic and foreign. His name features in 384 of the thousands of emails released from Clinton’s private server. One of the turns the congressional investigation has taken is to examine why Clinton conducted government business on private email accounts.

Based on my review of the “Sidney letters,” here are five takeaways about the kind of input Blumenthal gave Clinton on Israel and what she made of it. Keep in mind: Clinton’s emails clearly show that she was given her Israel advice from a broad range of sources, most of them sympathetic to the Jewish state.

1. Clinton takes Blumenthal seriously and likes his anti-Israel son’s work. “A very smart piece – as usual,” she told Blumenthal, referring to a November 2010 blog post by his son, journalist Max Blumenthal, on the rise of the far right in the Netherlands.

In the post, Max Blumenthal attempted to connect extreme right-wingers in Europe and Israel, and dismissed protestations by Israelis he encountered that their country does not welcome the Islamaphobia espoused by Dutch politician Geert Wilders.

In August 2010, Clinton asked Sidney Blumenthal to resend his son’s latest article on the U.S. right wing because an earlier email cut off. She then asked her assistant to print out the article, presumably so she could read it at her leisure.

“It stopped abruptly and I can’t pull up the rest, so I’m anxiously awaiting for [sic] the rest,” she wrote. “Pls congratulate Max for another impressive piece. He’s so good.”

Blumenthal forwarded Clinton many of his son’s writings on the region, including several excoriations of Israel’s deadly raid of the Turkish flotilla that attempted to break Israel’s blockade of the Gaza Strip in 2010.

2. Blumenthal stands well to the right of his son on Israel. Blumenthal forwarded to Clinton writings by liberal Israel commentator Peter Beinart.

He also advised her prior to her speech to AIPAC in March 2010 to praise the Israel lobby but to favorably mention J Street, a left-wing Israel advocacy group, as well. This, he suggested, would remind AIPAC “that it does not have a monopoly over American Jewish opinion.”

Blumenthal described as “objectionable” far-left intellectual Noam Chomsky’s views on Israel. Chomsky, while hypercritical, is more moderate than Max Blumenthal on the subject.

In May 2010, when Israel initially refused Chomsky entry to the country, Blumenthal wrote: “His political views may be ridiculous or objectionable, though he is the greatest linguistic scholar in the world, but barring him for his political opinions has created a needless PR disaster.”

Clinton asked an assistant to print three copies of Sidney Blumenthal’s email. What if any pressure she brought to bear on Israel is unknown. But within days, Israel reversed its position and asked Chomsky to come back. He declined.

3. Blumenthal is highly attuned to Netanyahu’s slights of the Clintons. Blumenthal forwarded an analysis from the Israeli newspaper Haaretz in March 2010 that depicted Netanyahu as “isolated and weaker” after his run-ins with Clinton that month.

In July, he sent over a blog post from Tablet lambasting Netanyahu after the revelation of a 2001 video in which the once and future Israeli prime minister bragged to terror victims that “America is a thing you can move very easily” and called President Bill Clinton “radically pro-Palestinian.”

An analysis that Blumenthal sent Clinton from the Israeli newspaper Maariv, from May 27, 2010, depicting Netanyahu as believing that he “defeated” her and others especially engaged her. “Are you up? Can I call?” she replied to Blumenthal at 7 a.m. on June 1.

4. Blumenthal’s personal political concerns can trump his dislike of Netanyahu. In March 2010, Blumenthal shared with Clinton an article he disliked from The New Republic, calling the magazine “a preferred outlet for the highest level of Likud/neocon propaganda.”

But his aim in forwarding the analysis by Yossi Klein Halevi of the crisis in U.S.-Israel relations was not so much to show his disagreement, but to use it as evidence against his bete noir – David Axelrod, then-political adviser to President Barack Obama.

Axelrod had needlessly angered the Israelis with his attack tactics, Blumenthal argued, writing: “I’d make [Deputy Secretary of State James] Steinberg to [sic] tell [National Security Adviser Tom] Donilon they need to rein in Axelrod. Axelrod has enough to do fixing the domestic messes he’s made.”

5. Clinton may like and trust Blumenthal, but she doesn’t always agree with him, or share his pessimism about the prospect of Israeli-Palestinian reconciliation, absent pressure on Israel.

In August 2010, he sent her an Op-Ed from the Financial Times titled “A poisoned process holds little hope” and asked her to read especially the last paragraph, which said: “The outlines of a deal are clear, in the (Bill) Clinton parameters of 2000 and Arab Peace Initiative of 2002, endorsed by 22 Arab and 57 Muslim countries (as well as Hamas, as part of the 2007 Mecca accord). There has to be an end to the occupation, and the US and Quartet cannot just allude to this; they must demand it.”

Clinton replied: “Well, this may be a case of no good options, but I still believe it is better to be caught trying. Stay tuned …”