On Hanukkah, just let the lights go out 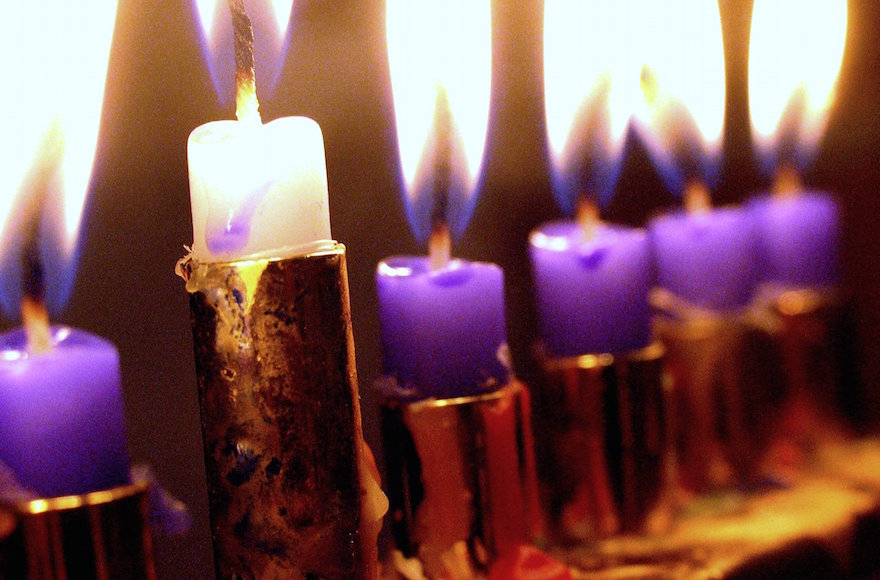 Quiet contemplation of the menorah can be rewarding. (Flickr Commons)
Advertisement

LOS ANGELES (JTA) — There’s a popular Hanukkah song recorded by Peter, Paul and Mary, “Light One Candle.” Its chorus insists we “don’t let the light go out” — but I’ve been thinking that maybe we should.

Not that I want to leave all those Maccabee children stumbling in the dark on cold December nights, or leave them without an image of light and hope to plug into. But, sometimes, letting the light go out kindles an altogether different kind of luminance in which to examine the moments of our lives that we hold dear.

So my urging that we watch the light go out is a literal one — while we love to bask in the glow of our menorahs, what is really illuminating is watching the candles go out. Watching them burn out, one by one, makes me think about how remarkable it is to kindle light.

In a time when LED menorah decorations are plentiful and one can use an app to light the “candles” on their smartphone, please give me candles blue, yellow, red and white.  The fire of my imagination lights up as their wicks burn down.

One Hanukkah — after our family menorah was lit, the blessings chanted, the songs sung, the gifts opened — everyone trudged upstairs to watch TV. I stayed downstairs alone and watched the menorah burn low. Though the communal and commercial push on Hanukkah is toward shopping-mall candle lightings, house parties and group crafts for kids, I wanted to see if the holiday could also be quiet and contemplative.

I’m not talking “silent night” here — that’s that other holiday — but a real chance to take in the play of shadow and light and contemplate what Hanukkah means.

The Jewish life cycle, from bris or baby naming to funeral and shiva, leaves little time for singular reflection. Judaism calls for a group, a minyan, to experience much of what it offers. Even on Yom Kippur, we do not confess our sins alone, but together as community.

So I admit that sitting alone and watching the candles burn down seemed a little downbeat and weird at first.

But the traditional prayer “Hanerot Halalu” (“These Lights”) — which reminds us, as we look upon the candles, to thank and praise God “for the wondrous miracle of our deliverance” — helped me view this solo experience in a different, well, light. While watching the flames, I finally connected with the words of the prayer, realizing that after eight nights of parties and presents (as well as latkes, sufganiyot and black cherry soda), I felt miraculously delivered, like I was a Maccabee who emerged victorious from the combat zones of holiday shopping.

Casting a shadow on my reverie, however, was the “Hanukkah Meditation” in my Sim Shalom prayer book. It suggested that “in the last glimmer of spiraling flame,” I should be able to see the spark of “Maccabees, martyrs, men and women of valor.”

Try as I might, staring at the candles burning down, all I could make out were colorful driblets of wax.

I wondered: Was there some other message?

Flames reach out at us from most every part of Judaism. Looking into our menorahs, they can draw us into a light of memory, like a yahrzeit candle lit at the anniversary of a loved one’s death. Flames also light us up with celebration, such as illuminating the candles of Shabbat or setting bonfires on Lag b’Omer.

READ: The rise of the menorah bong, and how Hanukkah became a ‘high’ holiday

In the window of my dining room, another candle connection was burning up right before me. The shamash, the candle used to light all the others on the menorah, was burning out first, making me ask: Who had been my shamash? Taking bows in the candlelight were a basketball coach, a college lecturer, the rabbi where I grew up, a kid from Scouts and, to a well-earned round of applause, my parents. In turn, they had showed me how to move my feet, write, parse Torah commentary, cook and strive toward menschhood.

In the Sefer Yetzirah, the Book of Creation, the earliest foundation text of Kabbalah, there is a passage about a “flame in a burning coal.” Aryeh Kaplan, an Orthodox rabbi who was known for his knowledge of physics and Kabbalah, wrote that it can be used as a meditation. In his book “Sefer Yetzirah: The Book of Creation in Theory and Practice,” various parts of the flame correspond to the Sephirot, or attributes through which Ein Sof — “the infinite” — is revealed.

In Kaplan’s meditation, the wick represents the physical world; the blue flame closest to the wick is “the counterpart of Malchut,”or Kingdom, which is our perceptions of God’s actions and attributes. Surrounding this is the bright yellow flame, which corresponds to the Sephirot of Kindness, Strength, Beauty, Victory, Splendor and Foundation.

The hottest part, the white flame, is the Sephira of Binah, or understanding, with the “light radiating from the candle,” corresponding to Chochmah, or wisdom.

“The only way in which the flame can rise is for all of these parts to come together,” Kaplan wrote.

And rise they did, growing brighter first, and then sputtering out, one by one, but leaving me with a glow.