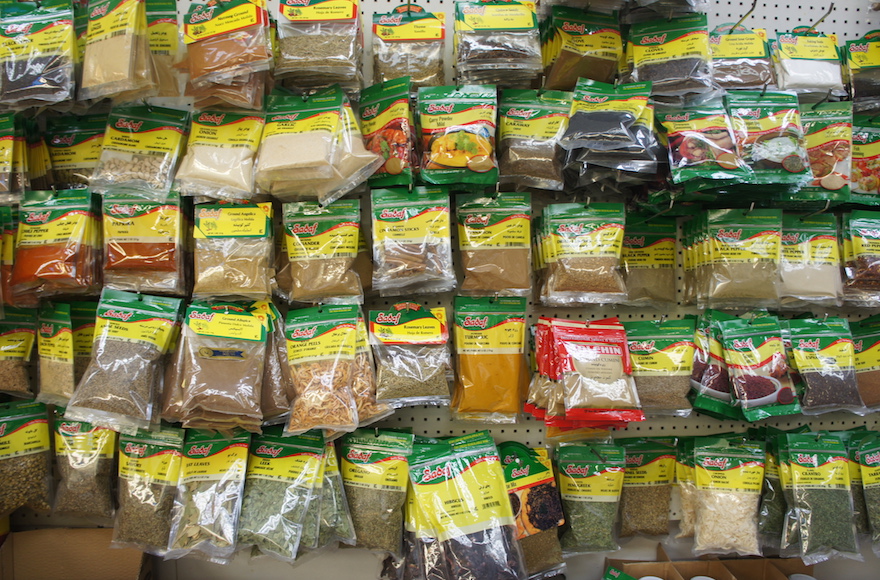 The cuisine of this strong, close-knit community is not unlike that of Persian cuisine in general: colorful rice dishes, rich and complex meat stews, and  liberal use of flavors like saffron, rosewater and pistachio.

There are a handful of kosher Persian markets in the Pico Robertson neighborhood of Los Angeles. They’re close together and range from tiny to full-fledged supermarket size.

I recently had the chance to tour one of the markets for some schooling on Persian ingredients and cuisine from the best source: a Persian Jewish grandmother and mother.

The first thing to know is that like the shuk in Israel, the Persian market is as much a gathering place as it is a grocery store. Soon after walking through the door we ran into a cousin — and then, of course, another cousin.

There is a dizzying array of products in English, Farsi and Hebrew to choose from, so I was grateful to have two experienced tour guides to translate the diverse products and their uses.

Prior to my trip, I was familiar with Persian cucumbers, which are pretty common in supermarkets like Fairway or Trader Joe’s. But what my tour guides Natalie and Minoo shared with me is that the cucumber bin — much like the proverbial water cooler — is where gossip and news of the community is exchanged, as women pick through the barrel to find the very best specimens.

Not all the ingredients I encountered were quite as familiar, but there was something interesting and delicious at every turn. Here are nine of my favorites.

Sangak bread is a traditional wheat Persian bread, often eaten for breakfast with butter and jam, or served as an accompaniment to a large meal. You buy this lavash-like bread in enormous rectangle sheets that can be about 5 feet tall. 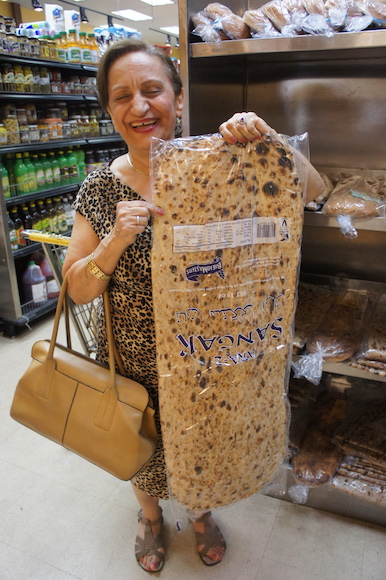 Lavash-like sangak bread can be about 5 feet long. (Shannon Sarna)

Dried orange peel is added to rice with raisins, rosewater and saffron for special celebrations — Persian culture emphasizes serving sweet dishes on happy occasions. But take note: Dried orange peel should always be soaked in warm water before it is added to a dish, otherwise it will retain too much bitter flavor.

Saffron rock candy, called nabat, looks like any other rock candy, but it gets its brightly hued color from its saffron flavor. Nabat may be a sweet treat, but it is also used as an herbal remedy — Persian parents give it to their kids to aid digestion. It can also be served after dinner with tea to add extra flavor and sweetness.

Fenugreek is an herb that can be found dried or fresh. It’s an essential ingredient in one of the most widely known Persian stews, ghormeh sabzi, a meat and herb stew that is also made with dehydrated limes.

Dehydrated limes are among the most recognizable flavors of Persian cooking for the savory, sour element they add to stews and dishes. You can buy them whole or powdered.

Rose petal jam is used like any other jam, served with butter for toast or on top of Greek yogurt akin to parfait. It has a distinctive rose scent and a sweet taste.

Rosewater is a sweet, fragrant essence that is made by steeping rose petals in water; it is used in similar ways as orange blossom water. It is added to sweet and savory dishes — but it has a strong flavor and should be added in moderation.

Sugar almond candies are white strips of almond flavored with rosewater. They almost resemble thin, clustered yogurt-covered raisins and are sold by the container. This sweet treat used to be thrown at brides and grooms on their wedding day, but like rice, that is no longer allowed, though it is still traditional to have on hand at engagements and weddings.

Wild esphand can be found in the spice section — but it’s not edible. Not unlike sage, it is traditionally burned for health reasons, to kill germs and to “ward off evil.” Even though the practice may sound a little old fashioned and superstitious, it appears to be fairly common, as wild esphand was sold in abundance at the market I visited. Hey, it can’t hurt.