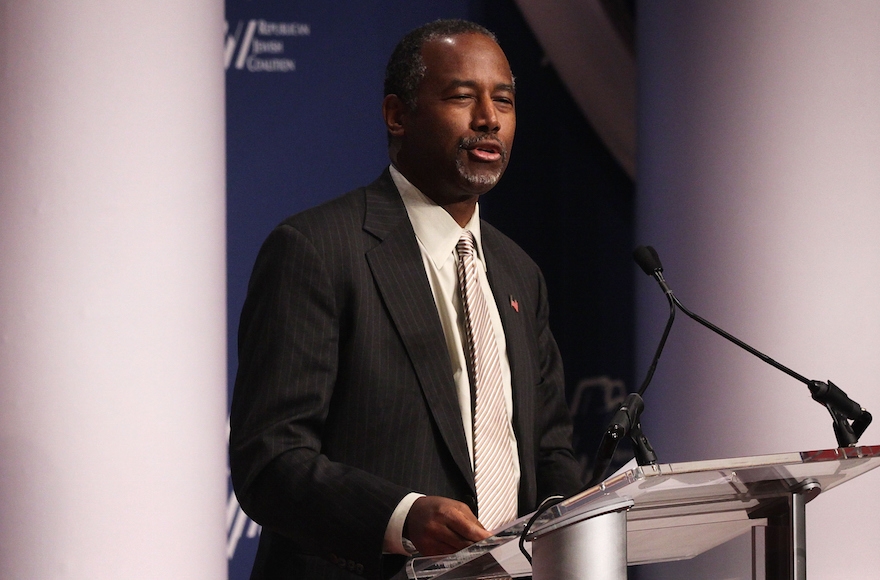 The longest Thursday came and went.

I was unable to attend the Republican Jewish Coalition’s forum for 14 (all 14!) candidates for the GOP nod, and so I missed my shout-out from Jim Gilmore, the former governor of the Commonwealth of Virginia — i.e., my former governor. (Yes, I proudly claim him, even dead last in the polls, and he claims me too. More below.)

Our reporter Sarah Wildman stepped in, and will have a comprehensive story later on Friday, but here I am on a train to Washington, obsessively picking through C-Span clips of the event.

1. Ben Carson read a book, and it was the wrong one

Ahead of the event, I said Ben Carson needed to show some foreign policy chops, after bizarre pronouncements on the presence of Chinese troops in Syria and the utility of handguns against the German Nazi machine.

At the RJC event, closely reading notes, he delivered a sober lecture on the rift between Hamas and Fatah in the West Bank and the Gaza Strip. Nothing he said was inaccurate, but the conclusion he drew, suggesting that if only these two murderous rivals got it together there might be a chance for peace, would have nonplussed this crowd.

“Part of the problem of course is that Fatah is a secular political movement while Hamas is a deeply religious Islamic political movement,” Carson said. “And while there have been many times in the past that two groups tried to operate unity governments, this has always devolved into minor civil wars between the two. The bottom line is that even if the Israeli government today withdrew to the 1967 borders and gave up Jerusalem there is no one Palestinian group representative of the Palestinian people that could ratify the agreement. Thus no peace agreement can be reached until the Hamas-Fatah issue is resolved.”

The politically correct posture on Hamas, for Israel and for much of the pro-Israel community — and certainly among its politically conservative precincts — is not that it needs to settle its differences with Fatah, but that it is treif, not kosher, untouchable. If anything, the tendency among right-wing pro-Israel activists is to paint Fatah and Hamas with the same brush.

2. Donald Trump may not have a Jewish problem, but he’s developing an Israel problem

The real estate billionaire said he wasn’t likely to get support from the RJC crowd — because he was too rich to be bought.

He also complimented the room, saying the negotiating skills of anyone in it outclassed Team Obama after the Iran nuclear deal.

“This room negotiates deals,” he said. “Perhaps more than any room I’ve ever spoken to.”

Was he invoking Jewish stereotypes? The National Jewish Democratic Council thinks so: “Donald Trump has been remarkably offensive throughout his candidacy, but to make these sorts of remarks before a Jewish audience is a new level of outrageousness,” it said in a statement.

Not so fast, cautioned the Anti-Defamation League’s Jonathan Greenblatt: “After having carefully reviewed the speech, we do not believe that it was Donald Trump’s intention to evoke anti-Semitic stereotypes. He has made similar comments about spending his own money on the campaign, and not asking for money from donors, to many other groups.”

The full passage tilts toward Greenblatt’s take — Trump, describing a culture of politicians bought and sold by rich people, said, “I understand, hey five months ago I was with you.”

“In this case he is speaking to a group of Jewish Republicans, a significant portion of whom are business people,” Greenblatt said.

Trump’s bigger problem with this crowd — which laughed appreciatively, at least according to the C-Span audio, at his remarks about their business savvy — is with his Israel posture. Trump the dealmaker’s refusal to reveal his hand does not sit well with a crowd that wants to hear clearcut pro-Israel positions up front.

He was booed for not pledging to recognize a unified Jerusalem as Israel’s capital, saying that to do so would compromise him as a peace broker.

Like Carson, Trump is tone deaf here to conservative pro-Israel political correctness, which assumes that of course Israel and its prime minister want a deal, it is only the Palestinians who are bloody-minded.

The former Virginian governor brought his dictionary to the event, persuasively arguing that the San Bernardino massacre on Wednesday fit the definition of terrorism.

He also read the definition of “kishkes”: “A beef or fowl intestine stuffed into a mixture as of flour, fat, onions and seasonings and roasted.”

Why did kishkes come up? Well, “There’s a fellow named Ron Kampeas who wrote a little article for the Jewish Telegraphic Agency,” he explained. “He said, ‘Gilmore and (former New York Gov. George) Pataki — really?'” (I kind of did say this.) “He also said we had to come here today to pass the kishkes test.” (Actually, I quoted his host, RJC director Matt Brooks, as saying this, but okay.)

So did he pass? Well, he struggled with the pronunciation, but he showed good humor. Referring to the recipe for kishkes, he said: “I thought, ‘This is the Republican campaign for the nomination!'”

Nice move with a Jewish crowd. He passes.

This is how Kasich began his pitch:

“My mother was a pretty smart woman. Her mother could barely speak English, she was married to man whose father was a coal miner, so they understood their share of struggles.

“And my mother told me one time, I was a very young man, she said, ‘Johnny if you want to look for a very good friend, get somebody who’s Jewish.'”

This prompted laughter, but Kasich was undaunted.

“And you know why she said that? She said no matter what happens to you, your friend, your Jewish friend will stick by your side, and fight right with you and stand by you. I never forgot that from my mother, and my mother was right.”

5. Ted Cruz has a neoconservative problem

“If you vote for Hillary Clinton, you are voting for the Ayatollah Khamenei to have nuclear weapons,” he said.

Tough talk, but the faction of the Republican Party with the strongest pro-Israel credentials — the neoconservatives — are accusing him of being all talk, and probably little action.

This stems from an interview Cruz gave Bloomberg News, in which he attacks Sen. Marco Rubio, R-Fla., for “military adventurism.”

He also said, “we have no dog in the fight of the Syrian civil war.” Among neoconservatives, that amounts to fecklessness, a quality they have attributed to President Barack Obama, and would rather not see in a GOP president.

Here’s Danielle Pletka, the American Enterprise Institute vice president, in a post that has gone viral among politically conservative Jews.

“I don’t know what dogs Mr. Cruz walks, but a victory for Bashar al Assad will be the most important boost for Iran since Barack Obama signed the Iran Deal,” she wrote. “And a victory for ISIS on the ground in Syria will be equally dangerous to the United States, our Gulf allies (you know, the dictators Mr. Cruz appears to admire) and Israel, all dogs that the senator from Texas has in the past seemed to have an interest in.”

More personally, Cruz in the Bloomberg interview is promiscuous in how he uses “neo-con” as a catchall for military adventurism — a note that Jewish conservatives find grating.

Back to Pletka, who drops a heavy hint that Cruz may be perilously close to a line hostile to Jewish interests:

“I’m not sure where the neo-cons wish us to invade (left my decoder ring at the last Elders of Zion meeting), but what exactly does this would be Commander in Chief wish us to do? Not approach Syria.”