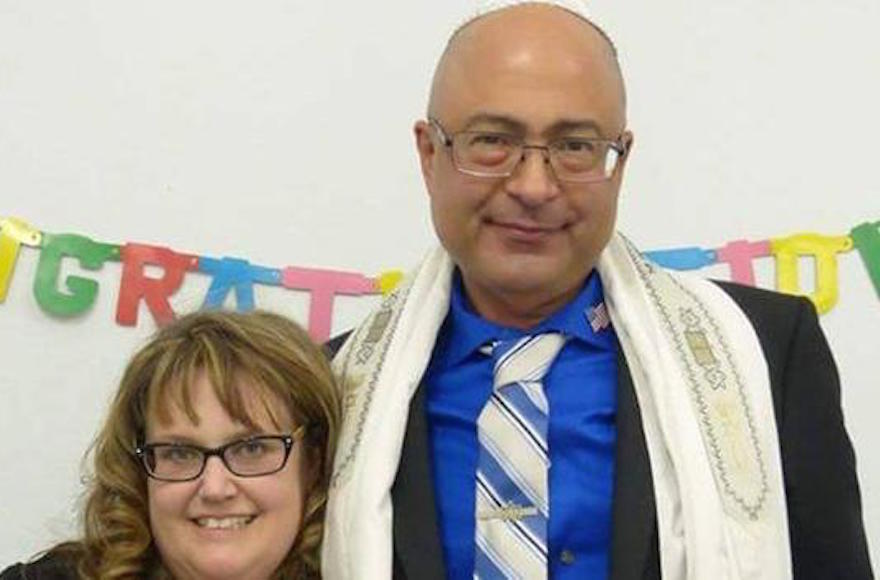 Nicholas Thalasinos posing for a photograph with his wife, Jennifer Thalasinos. (Courtesy)
Advertisement

(JTA) — Nicholas Thalasinos, the messianic Jew killed in the shooting spree in San Bernardino, California, reportedly sparred with his alleged killer over Islam and Israel weeks before his death.

Thalasinos got into an argument with Syed Rizwan Farook several weeks prior to the shooting on Wednesday, which left 14 people dead and 21 injured, according to several news reports.

Thalasinos said Farook “doesn’t agree that Islam is not a peaceful religion.” Farook responded that Americans don’t understand Islam, to which Thalasinos said, “I don’t know how to talk with him,” the Associated Press reported based on an account from a friend of Thalasinos who overheard the exchange.

The New York Times reported that the friend, Kuuleme Stephens, heard Farook say that Israel was not the Jewish homeland and that Jews don’t belong there.

According to Thalasinos’ wife, the couple were messianic Jews, a faith that combines elements of Judaism with a belief that Jesus is the messiah. Messianic Jews are not accepted as Jews by any of the major Jewish denominations. Thasalinos reportedly wore tzitzit fringes and is wrapped in a Jewish prayer shawl in a photograph widely circulated since his death.

Police believe Farook, an environmental inspector with the county health department, carried out the shooting at a holiday party for the department at the Inland Regional Center, a facility that provides services for thousands of people with disabilities. Farook’s wife, Tashfeen Malik, participated in the shooting and had pledged allegiance to the Islamic State in a Facebook post, police say.

Thalasinos’ Facebook page is also filled with postings supportive of Israel and highly critical of Islam and President Barack Obama.

Early on Dec. 2, Thalasinos posted a message he received from “the ANTISEMITIC BRAIN SURGEON Med Ali Zarouk” threatening him with death and railing against Israel.

“Anyway my new hobby appears to be BLOCKING PAGAN ANTISEMITIC TROGLODYTES so I’m just passing this along to warn others,” Thalasinos wrote in the post.

Here is a message sent to me by the ANTISEMITIC BRAIN SURGEON Med Ali Zarouk:”you will never sucsseed to make a…

Earlier that day, he posted an article about an Arab anchorwoman who referred to an assailant who stabbed an Israeli soldier as “my hero.”

“Another of Obamas long-lost kids,” Thalasinos wrote. “ALL ANTISEMITES are of THE SAME SPIRIT.”

In other Facebook posts, Thalasinos expressed doubt about climate change, railed against Obama for making a nuclear deal with Iran and shared several posts from Jewish groups, including the World Zionist Organization.

On Nov. 28, the day after Black Friday, Thalasinos posted a photo of shoppers lining up outside a Best Buy electronics store with the caption: “Although it SHOULD be SHABBAT – at least Sunday people actually WORSHIP!”

Although it SHOULD be SHABBAT – at least Sunday people actually WORSHIP!

By signing this treaty with IRAN, Barack Obama proved he cares for the Jews as much as Hitler did.