AMSTERDAM (JTA) – More than 350 years after this city’s Portuguese Jewish community excommunicated Baruch Spinoza and banned his writings for eternity, the philosopher’s books are for sale at the souvenir shop of the community’s synagogue.

Spinoza, a Dutch-born Jewish philosopher who laid the intellectual foundations of the Enlightenment and is sometimes referred to as history’s first secular Jew, was banished by Amsterdam’s Portuguese Jews in 1656 for heresy. The fact that his works are now being sold by the very community from which he was once ostracized is cited by some as evidence that the ban is effectively no longer operative.

But to the philosopher’s admirers, the fact that it was never formally rescinded remains a blot on the community and reinforces Spinoza’s view that Judaism is a narrow-minded, dogmatic faith.

That’s why hundreds of them gathered here Sunday for a landmark debate on whether to formally lift the ban and, perhaps, even effect Spinoza’s symbolic rehabilitation into the fold of the Jewish people.

“His ideas are a part of Dutch heritage,” said Ronit Palache, a secular Dutch Jew in her 30s and self-described Spinoza aficionado who organized the symposium. “The time to lift the ban is long overdue. It’s in a way a black mark on Jewish history.”

The symposium, a sold-out event that featured an address by the head of the Dutch Portuguese Jewish community and leading Spinoza scholars from four continents, offered a rare glimpse of the original writ, which is held in the community’s library. An unusually long and vicious text, the writ of banishment – “herem” in Hebrew – was read aloud in Portuguese, its citation of unspecified “evil opinions and acts” followed by a string of curses against Spinoza, who was then just 24 years old. 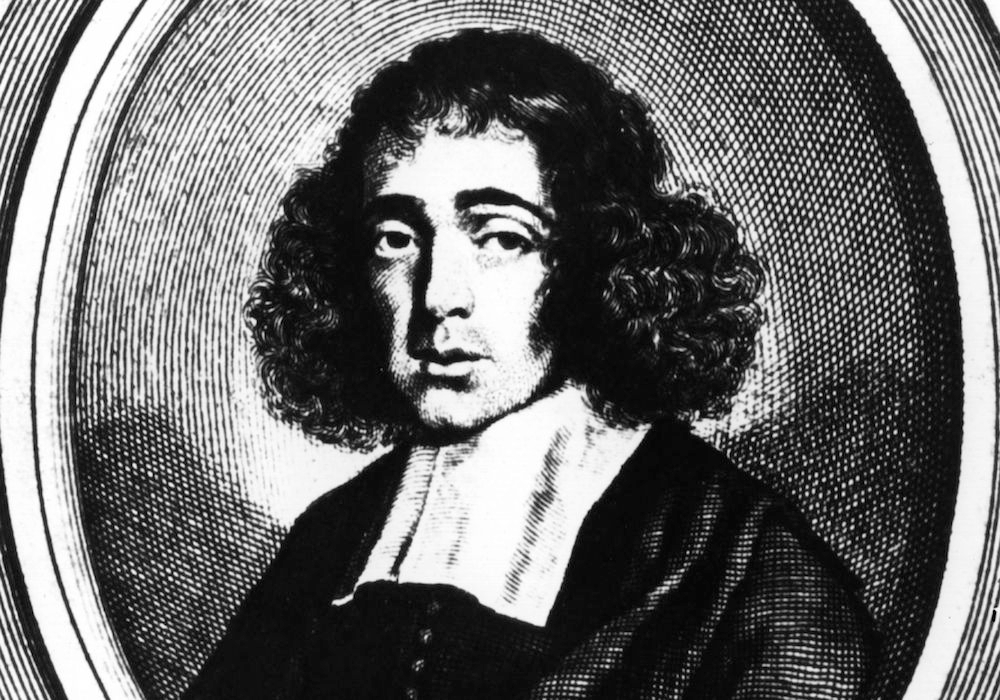 Following the ban — as well as an assassination attempt by a knife-wielding Jewish fanatic outside the synagogue — Spinoza left his native Amsterdam and the Jewish community. Devoting his life to the study of optics and the development of his philosophy, he published his magnum opus “Ethics” in 1677, the year of his death from lung disease at 44. Spinoza was buried in a churchyard in The Hague.

Why Spinoza was so passionately detested is a matter of some speculation, said Steven Nadler, an American professor of history at the University of Wisconsin and an international authority on Spinoza. The herem document does not specify Spinoza’s “evil” actions, but Nadler believes it derives from several of his assertions, including that God does not exist, the Jews are not a chosen people and the Hebrew Bible has no divine provenance.

Spinoza elaborated these ideas in “Ethics” and other writings, where he argued that Judaism and its scriptures were manmade constructs intended to exert control over the ancient Israelites. His criticisms were later seized upon by Immanuel Kant and Georg Hegel in some of their anti-Semitic writings.

At the symposium, Nadler argued that herem was imposed for Spinoza’s revolutionary philosophy, but he also proposed several political explanations.

One hypothesis concerns the fact that Spinoza appeared before Dutch courts to rid himself of his father’s debts at a time when members of his community were expected to appear only before a Jewish court. 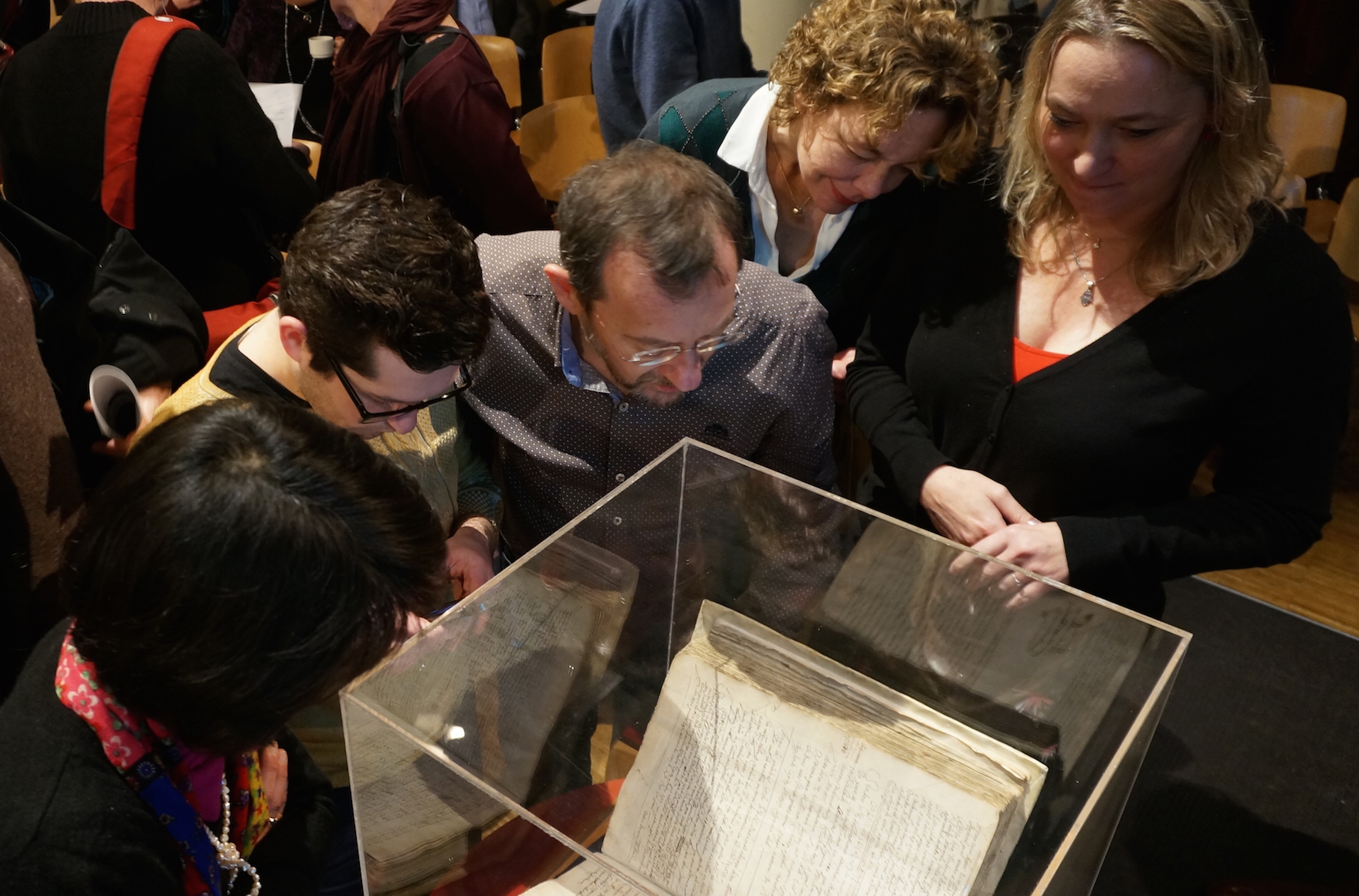 Attendees at an Amsterdam symposium on whether to lift the ancient order of excommunication against the philosopher Baruch Spinoza examining a copy of the original writ against him, Dec. 6, 2015. (Cnaan Liphshiz)

Another theory suggests Spinoza threatened to invite revenge upon other Jews for his heresy, which was deeply resented by the state and the wider religious public. In 1678, the Dutch government also banned his writings and set heavy punishments against anyone selling his books. Disavowing Spinoza was a necessary public act for a community eager to avoid angering its generally tolerant hosts.

But while the Dutch state’s ban was rescinded long ago, the Jewish community has resisted repeated appeals to follow suit, including one from Israel’s first prime minister, David Ben-Gurion.

Sunday’s symposium would not be a turning point on this issue, the chief rabbi of the Portuguese Jewish community, Pinchas Toledano, told the crowd. Noting the de facto disappearance of the ban and the lack of any limitation on freedom of thought (he cited the gift shop as proof), Toledano nonetheless said he had neither the authority nor the will to rescind the measure.

Lifting the herem “would clearly imply we share the views of Spinoza that state that God does not exist” and that “the law of Moses is no longer relevant,” Toledano said. These ideas “tear apart the very foundations of our religion.”

Other Dutch Portuguese Jews disagree. Nathan Lopes Cardozo, an influential Orthodox rabbi, began his address by holding up a portrait of Spinoza that Cardozo’s father, a secular Jew, had drawn in the 1940s while he was living in hiding from the Nazi occupation.

“He was our family’s only rabbi,” Cardozo said of Spinoza.

Cardozo said he opposes Spinoza’s observations on Judaism, which he said were “deliberately biased” and “ultimately based on Spinoza’s utter ignorance” of the Talmud. Still, lifting the ban “would remove a huge stigma from Judaism as being dogmatic and narrow-minded, as Spinoza mistakenly argued.”

As the debate continued, Toledano became an unlikely interpreter of Spinoza’s own feelings about the herem.

He “never requested to rescind the herem,” Toledano said, and “probably even laughed at the whole concept of the herem and [at] the rabbis who imposed it.”