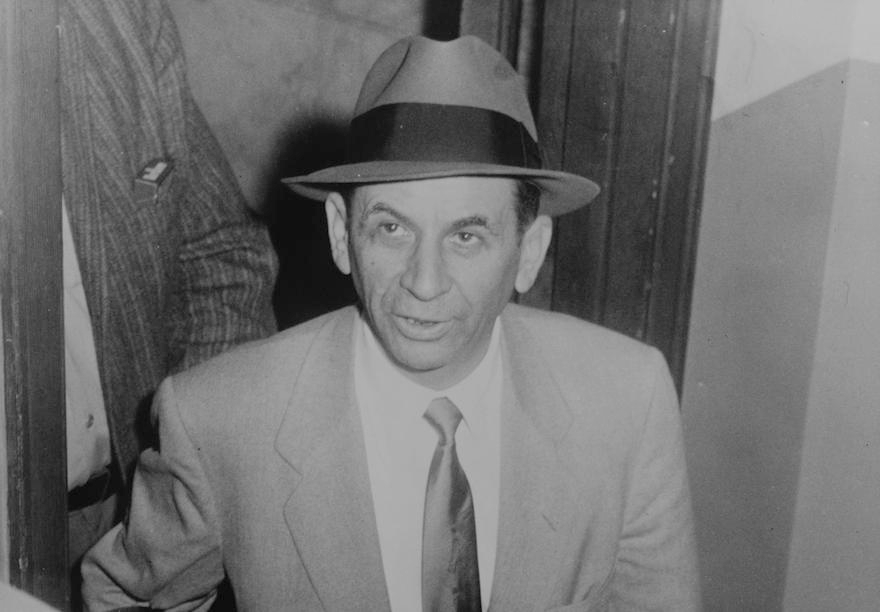 Meyer Lansky at a police station, where he is being booked for vagrancy, New York City, 1958. (Wikimedia Commons)
Advertisement

(JTA) — The descendants of Jewish gangster Meyer Lansky are seeking compensation for a hotel casino in Cuba he built in the 1950s.

Talks between the United States and Cuba regarding claims by Americans to property nationalized after the Cuban revolution opened Tuesday, and Lansky’s heirs are considering filing a claim, Reuters reported Thursday.

Gary Rapoport, Lansky’s grandson, told Reuters that he, his mother and his uncle are beneficiaries of Lansky’s estate and thus are entitled to compensation from the Cuban government for the Havana hotel casino, which opened just a year before Fidel Castro took over and outlawed gambling.

Rapoport, 60, said he was raised by Lansky after his mother’s divorce.

“Trust me, I’m not looking to move down to Cuba and take over the business,” Rapoport said. “I believe my family is entitled to something.”

Lansky, who died in 1983, was described in his JTA obituary as an “acknowledged financial wizard and one-time reputed czar of organized crime in the U.S. and many points overseas.”

Over the course of his career, he was associated with such convicted racketeers as Charles “Lucky” Luciano and Benjamin “Bugsy” Siegel, both boyhood chums, as well as “Dutch” Schultz, Al Capone and Louis “Lepke” Buchalter, the “hit man” of the notorious “Murder Inc.”

But although linked to illicit gambling and other forms of vice, Lansky was never convicted of a serious crime. He went to jail only once — a two-month sentence in 1953 on a gambling conviction in Saratoga, New York.

In 1972, he sought to immigrate to Israel under its Law of Return, but his application was denied because of his criminal past.

He was the inspiration for the Hyman Roth character in the 1974 film “The Godfather: Part II,” according to Reuters. In 1998, Richard Dreyfuss portrayed him in the HBO biopic “Lansky.”

While noting that its “mafia and gambling vestiges were quickly scrapped,” the hotel website says the lobby “still reflects elements typical of the era.”

Rapoport told Reuters he is optimistic the Cuban government will consider his family’s claim.

The talks over compensation come in the aftermath of a historic agreement last year to thaw U.S.-Cuba ties. Jewish contractor Alan Gross, who had been in a Cuban prison for five years, was released as part of the deal.