From HBO to Arthur Miller, what a ‘tough guy’ actor learned from his Jewish grandma 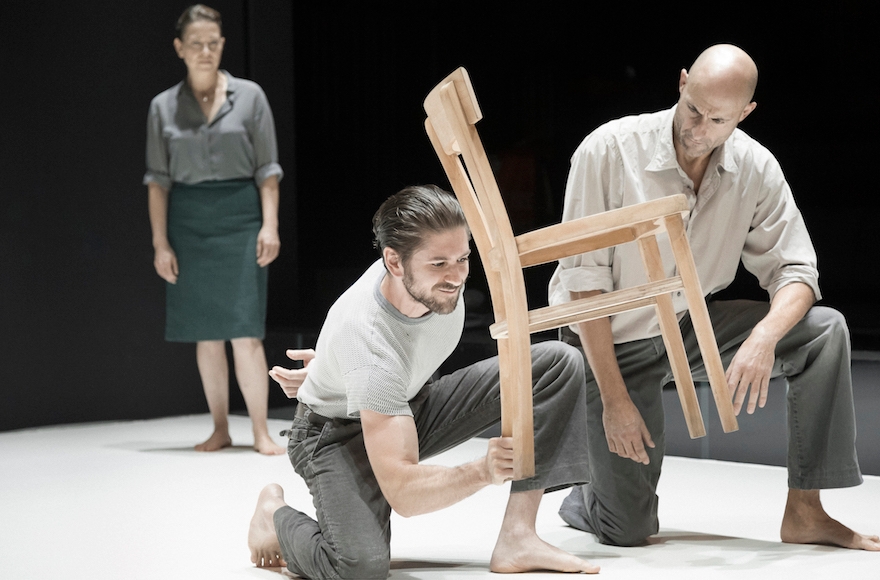 Michael Zegen, center, works those biceps in a scene from "A View from the Bridge." (Jan Versweyveld)
Advertisement

NEW YORK (JTA) — On a trip to London last year, actor Michael Zegen caught a revival performance of Arthur Miller’s 1955 drama, “A View from the Bridge,” about a Brooklyn longshoreman whose protective impulses toward his niece tilt toward lust.

“I had a terrible seat,” he told JTA. “But it still blew me away.” The production, which was directed by the visionary Ivo van Hove, was so powerful that when he saw ads promoting its transfer to Broadway, he planned to see it again.

But you know what they say about the best-laid plans. Instead of catching the Olivier Award-winning show as an audience member, Zegen ended up being cast in it as Marco, an Italian immigrant who comes to live with his family in Brooklyn, New York.

Zegen, 36, is a veteran actor who’s played several “tough guy” roles (including real-life American Jewish mobster Bugsy Siegel on “Boardwalk Empire” and firefighter Damian Keefe on “Rescue Me”), but the role of Marco initially seemed beyond his reach.

“They keep talking about how big and strong Marco is,” Zegen said over breakfast and green tea at a Moroccan-style restaurant near his West Village home. “I thought, ‘I’m not getting this.’”

Zegen may be lean, but he landed the role — and was given a trainer straightaway. Physicality is essential to the part, which is Zegen’s Broadway debut.

The revival of “A View from the Bridge,” which runs through Feb. 21, is staged on a nearly empty set. The stage features only one sizable prop, a dining chair that Zegen has to raise high above his head, single-handedly, in one of the play’s most visually arresting scenes. What Van Hove sacrifices in realistic detail, he gains in intensity of emotion.

Zegen has been acting since his high school days in Ridgewood, New Jersey. He got his professional start on “The David Letterman Show,” playing a character named Dwight the Troubled Teen in several episodes – an auspicious beginning, though footage of his performances is all but unfindable on the Internet.

His next role was a New York City firefighter on Denis Leary’s FX show, “Rescue Me.” That kept him busy for six years, after which he found a steady stream of work playing minor yet intriguing characters on high-profile shows — “How to Make it in America,” “The Walking Dead” and “Girls,” — and in Noah Baumbach’s film “Frances Ha.”

Zegen’s characters tend to be New Yorkers and more than a few are Jewish. Perhaps his most prominent role to date was Benny “Bugsy” Siegel on HBO’s “Boardwalk Empire.” 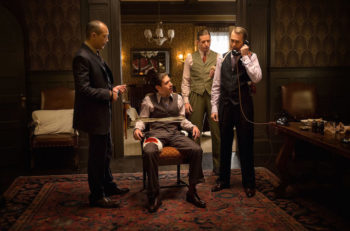 “I had gotten close to getting Meyer Lansky, and when I didn’t get it, I was crushed,” he said. “But then this came around.”

“The cool thing was that I got to make it my own,” he added. “There wasn’t a lot of information available about Bugsy’s life when he was young. There was a lot about Vegas and his later years in LA, but his teenage years – I couldn’t really find that much, so I had the freedom to play with it, and then the writers picked up on what I was doing and wrote accordingly.”

The stories of gangsters have long captivated many people, and Zegen is no exception. Of their portrayal in “Boardwalk,” in particular, he said he was especially drawn to the period clothes and sepia-tinged setting of 1920s Atlantic City.

That Bugsy was recognizably Jewish added another layer of intrigue. “I think it’s because people think Jews won’t fight back,” he said. “And here are these tough guys who are basically murdering machines.”

Embodying Bugsy’s Jewishness also meant dabbling in Yiddish; he had to nail the various put-downs that sound better in the old language. So he enlisted a trusted tutor: His grandmother.

Zegen said he’s very close to his grandmother — who, like his grandfather, was a Holocaust survivor. “I was raised with her war stories,” he said.

Perhaps not coincidentally, the role that Zegen’s felt closest to was Liam in the 2013 premiere of the play “Bad Jews.” It’s a funny, poignant drama about the death of a Holocaust survivor and the acerbic debate between his three grandchildren over who should inherit a prized chai necklace that survived the war.

Culturally familiar roles still come easily to Zegen. However, “it’s not necessarily about the type of character,” he said. “In the last play I did, ‘The Spoils,’ I played a Jewish banker, but it was a completely different part. He was happy-go-lucky. And I got to work with Jesse [Eisenberg, who both wrote the play and starred in its Off-Broadway premiere].”

“If the part’s good, I want to play it,” he said. “If it speaks to me, I’m gonna go all out to get it. I just did ‘Brooklyn’ with Saoirse Ronan. I’m Italian in that. So it’s either Jewish or Italian.”

Plus, Zegen added, in the upcoming film “The Seagull” — adapted from the Chekhov play and directed by Michael Mayer, who won a Tony in 2007 for “Spring Awakening” — he plays a Russian.

“So I’m branching out,” he said, smiling.