Rabbi for Trump gets behind The Donald on Facebook 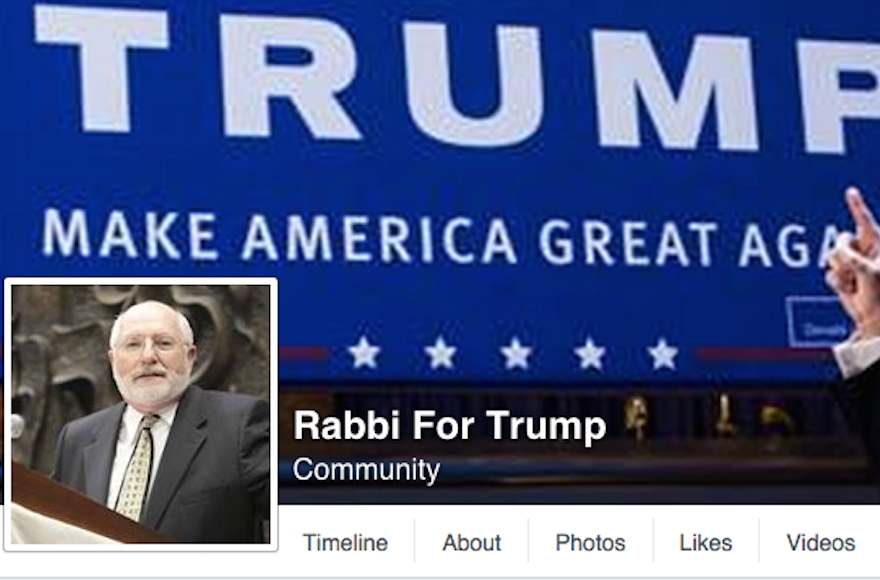 Now these groups are joined by a rabbinical flag-bearer for Republican presidential hopeful Donald Trump.

The controversial GOP front-runner’s fiery rhetoric about Muslims may have drawn condemnation from American rabbis and other Jewish leaders across the denominational spectrum, but that hasn’t stopped Rabbi Bernhard Rosenberg from cheering on The Donald.

A Yeshiva University-educated rabbi who is rabbi emeritus of a Conservative congregation in Edison, New Jersey, Rosenberg started a Facebook group, Rabbi for Trump, on Dec. 8. (Originally called Rabbis for Trump, he reportedly renamed it after failing to attract many like-minded colleagues.)

The group’s page has 520 “likes” so far, though how many of the likers are actual supporters, as opposed to interested bystanders, is anyone’s guess. So far, the posts consist mostly of praise for Trump, fiery complaints about negative media coverage of the candidate, promotions of Rosenberg’s book and a proud mention that Rosenberg’s congregation hosted the controversial, anti-Muslim blogger-activist Pamela Geller.

Rosenberg told the New Jersey Jewish News he started the group because Trump is “ the leader among all the Republicans at this point.”

He added that he also “wanted a vehicle to communicate a very strong message to [Trump] for supporting the State of Israel.”

The rabbi, who is the child of two Holocaust survivors and says he was born in a displaced person’s camp in Germany, shares Trump’s opposition to allowing Syrian refugees into the country.

“My concern is that these Syrian refugees are not being vetted by the FBI,” he told the New Jersey Jewish News.

Rosenberg, who notes frequently (and all in capital letters) on the Rabbi for Trump page, “The Nazis and Hitler murdered most of my family,” told the New Jersey paper he objected to a letter signed by 1,000 rabbis several weeks ago comparing Syrian refugees to Jewish refugees from the Nazis.

“There’s no comparison between this and the Holocaust, where Jews had nowhere to go to. Certainly in this case Europe can take them in and certainly the Arab countries can take them in. I just don’t want something to happen where my children or somebody else’s children live. I think it’s a disservice for Holocaust survivors to make the comparison,” he said.

“The truth is my parents had to go through all sorts of checks and be sponsored … They had to have jobs. I know more about being a refugee than many of these rabbis.”