How a Jewish reporter celebrated Hanukkah at the Kremlin 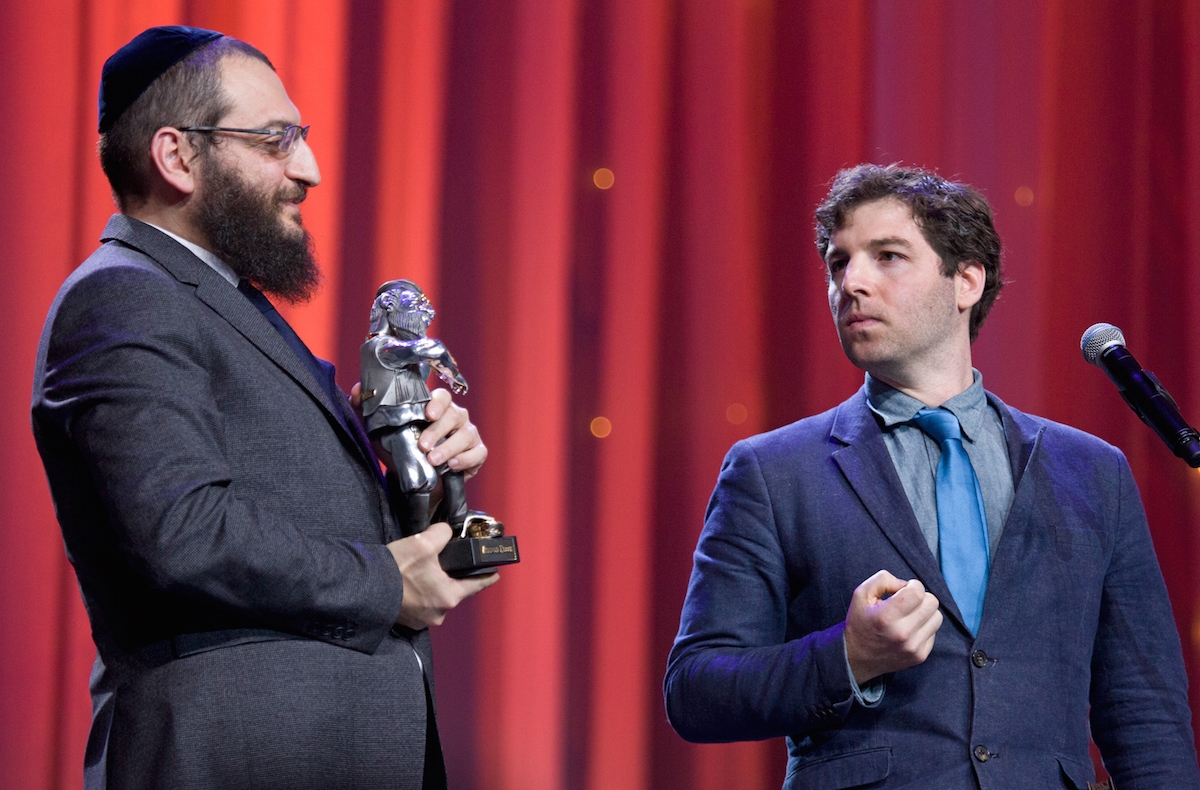 JTA's Cnaan Liphshiz accepts a Fiddler on the Roof Award from Rabbi Boruch Gorin at the Kremlin, Dec. 8, 2015. (Courtesy of Federation of Jewish Communities of Russia)
Advertisement

MOSCOW (JTA) — Like many tourists in Red Square, I have often wondered what lies beyond the tall walls that separate this Moscow attraction from the Kremlin, the official residence of Russia’s president and the nerve center of the state.

As a journalist long obsessed with Russia, I’ve wanted to take a peek inside the Kremlin for just about forever. In my fantasy, I’d have a one-on-one interview with Vladimir Putin in which I’d gain the strongman’s respect by beating him in a staring contest.

Frankly, however, I would have settled for a humble tour of the Kremlin, to ascertain answers to questions like: Does the Kremlin have the same Putin portraits that decorate other Russian governmental offices? Are the hallways really abuzz with army officers, as the “Mission: Impossible” movies have led me to believe?

The answers to my questions, I’m excited to report, are “no” and “no.”

I know this because on Dec. 8, my dream of peeking inside the Kremlin became a reality — and was even more bizarre than I would have imagined.

Upon arriving at the main gate to attend the Russian Jewish community’s largest annual event, I was welcomed inside this storied palace with the greetings “Shalom” and “Chag sameach.”

The occasion was the Fiddler on the Roof awards, an annual gathering of some 6,000 members of the Jewish community. The event — taking place for the 13th consecutive year at the Kremlin — was a surreal tour de force by a minority that has gone from the Kremlin’s punching bag during the Communist era to its darling under Putin.

It was jarring to see such a large crowd of Jews celebrating Hanukkah in a building that was practically an assembly line for some of the most anti-Semitic policies ever employed in the post-Holocaust world.

And it was humbling to be one of 10 laureates to receive an award  — a bronze figure of a Jewish fiddler created by Israeli sculptor Frank Meisler — for work deemed beneficial to the community. I was honored for my coverage of Russian Jewry for JTA; other winners included the creator of Moscow’s first Jewish film festival, a Russian-Israeli educator and a former prisoner of Zion.

“What it symbolizes is that a person should always hold his head high and carry his own tune no matter what the circumstances are,” said Rabbi Boruch Gorin, a top official at the Chabad-affiliated Federation of Jewish Communities of Russia, which organized the event.

READ: Why Putin embraces Jews, but not gays

The 2015 program featured many Jewish-themed performances, including two rap ensembles and the Russian Army Choir, whose 34 singers performed “Katyushka” — the original Russian version of a popular Israeli folk song — against a backdrop of a giant dreidel and projections of Hebrew-language scripture and symbols.

My father, born in Poland to a family who fled Communist persecution for Israel in 1957, was dumbfounded.

“Old Stalin must be spinning in his grave,” he exclaimed. “The Jews have taken over his precious Kremlin!” 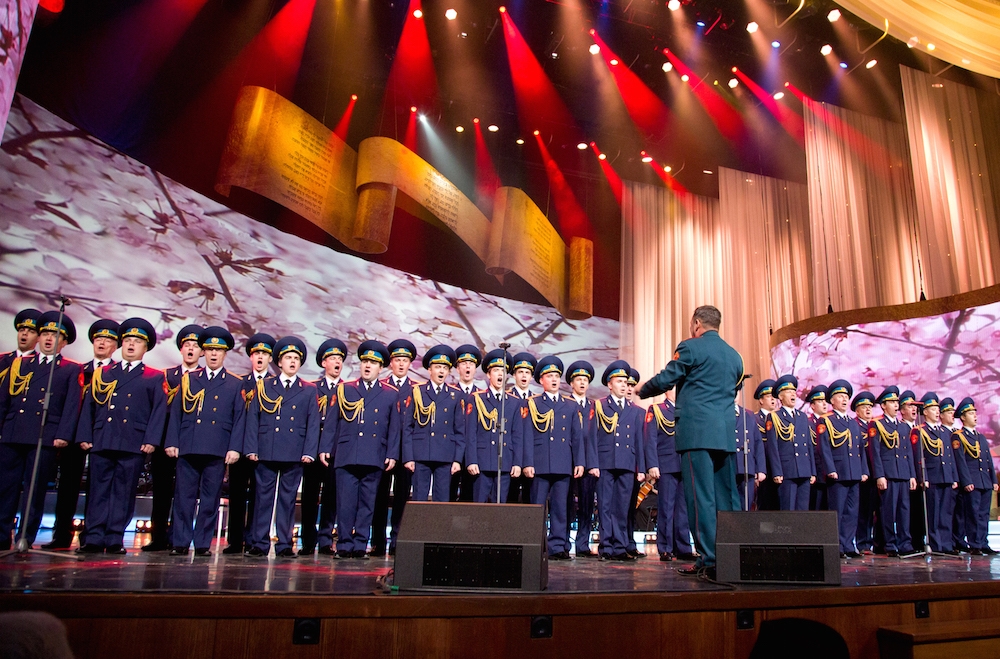 The Russian military choir performing at a Hanukkah celebration at the Kremlin, Dec. 8, 2015. (Federation of Jewish Communities of Russia)

In fact, the Jews that night only took over the State Kremlin Palace, a 1961 building that sinks 55 feet into the ground and once hosted the congresses of the Communist Party of the Soviet Union. The newest addition to the Kremlin compound, the palace’s fancy marble floors, purple upholstery, glass walls and delicate chandeliers, actually blend surprisingly well with the utilitarian features and low ceilings of its Soviet brutalist design.

The crowd at the ceremony was no less eclectic. A diverse mélange waited to give their coats to the 25 gloved workers at the enormous coat check, from bearded Chabad rabbis and their wig-wearing wives to short-skirted women with generous decolletes and bow-tied dates. Non-Jewish artists, intellectuals and government officials were also in the mix.

My father and I were among the handful of foreigners in attendance — our lack of familiarity with the event probably contributed to our sense of awe. But even the regulars seemed mindful of the symbolic dimension.

“It is important for me to receive this award here, where the most anti-Semitic policies were designed,” said Yossef Bigun, a fellow laureate and former refusenik who spent 10 years in Soviet jails for teaching Hebrew and advocating Zionism. His speech, and the entire event, was simultaneously interpreted to Hebrew. 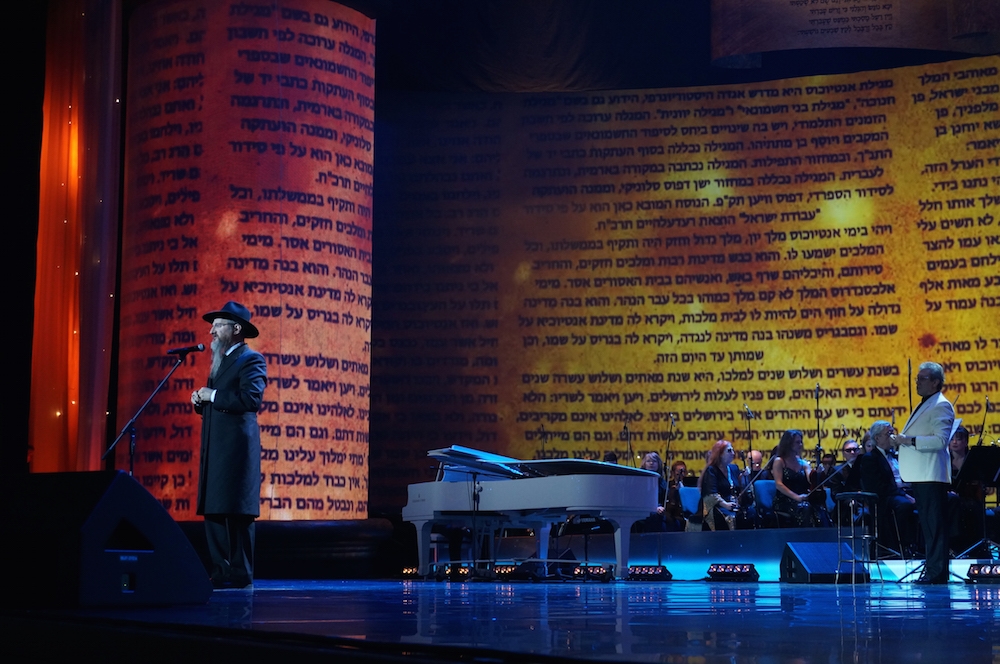 The venue was also significant to Rabbi Berel Lazar, a leader of the federation and one of Russia’s two chief rabbis, who told me it was selected to demonstrate that Russia has moved on from the anti-Semitic policies of the past. The community pays a nominal fee for hosting the event at the Kremlin, but it is by no means considered just another commercial venue. The community, he said, was especially invited to celebrate there.

“In all Jewish communities outside Israel, we sing on Hanukkah, ‘A great miracle happened there’ in reference to our ancestral land,” Lazar said in his address. “But in Russia, we might as well sing ‘here’ with our Israeli brethren because of the miracle that happened here, which we are witnessing now.”

Lazar is famous in Russia for his closeness to Putin and other senior officials, and he has used this open door to effectuate a phenomenal Jewish revival.

Shortly after a one-on-one meeting with Putin the day after the event, Lazar flew to Vladivostok, near Russia’s maritime border with Japan, to reopen a synagogue there — one of at least six opened in Russia this year alone with government assistance.

READ: A Russian chief rabbi stands by his strongman, aka Putin

This growth, spearheaded by Lazar and Chabad envoys willing to settle in the remotest of regions, has also exposed Lazar to passionate recriminations by liberal Russian and Ukrainian Jews that he is making Russian Jewry a fig leaf for Putin’s violations of international law, anti-democratic policies and persecution of other minorities. Lazar has dismissed the accusations, saying Jews are duty bound to restore their heritage in Russia, not to foment revolutions.

And while those disagreements persist, we fiddler laureates — devout and secular, foreign and local — were able to put all that aside for one Hanukkah evening, throw back a vodka or three and toast yet another holiday miracle.