On ‘torture’ of Jewish Duma suspects, a rare convergence of Israeli left and right 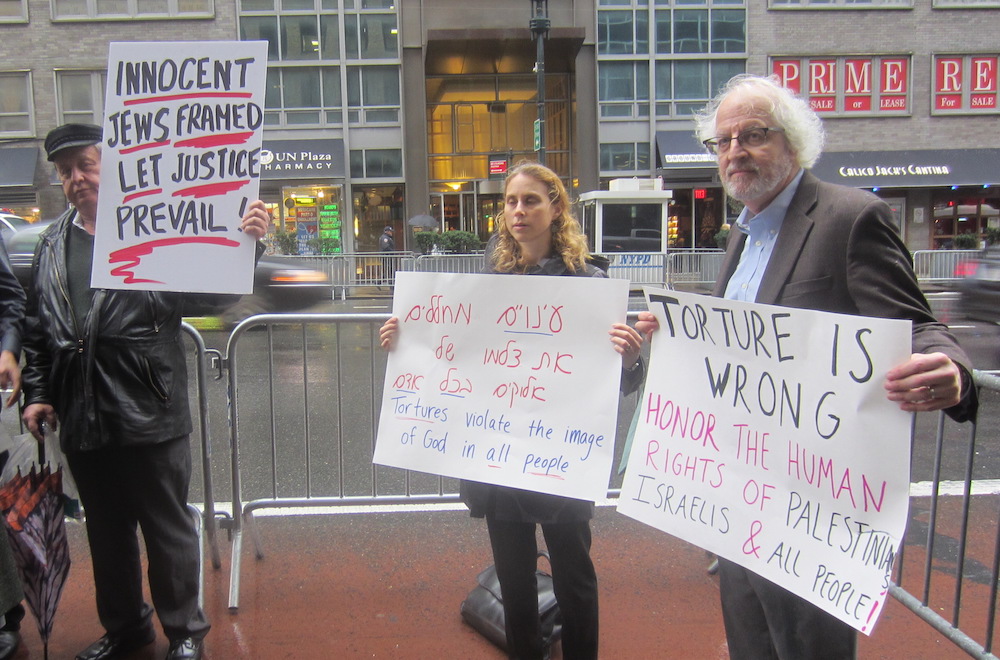 Rabbi Jill Jacobs, executive director of Truah: The Rabbinic Call for Human Rightsm, at a protest in New York organized by the right-wing Americans for a Safe Israel, Dec. 22, 2015. (Truah)
Advertisement

WASHINGTON (JTA) – The issue of torture in Israel has received unusual attention in recent weeks because of the identity of the alleged victims.

Human rights groups say nothing is new in the allegations that Jewish youths, arrested in connection with an arson attack over the summer that killed a Palestinian toddler and his parents in the West bank village of Duma, were tortured by Israel’s Shin Bet internal security service.

For years, Palestinians have charged Israeli authorities with doing much the same. And it is likely that, despite the renewed attention to the issue, little will change for a number of reasons, including the overarching trust that most Israelis place in their security services and the human tendency to fret over one’s own more than the perceived enemy.

But for a moment, however brief, claims by Jewish suspects have yielded an unusual convergence, with left-wing groups that have long decried Israeli interrogation methods making common cause with groups on the right angry that the Shin Bet has swept up some of their own.

“As long as it happens to others – in our case, the Palestinians – it’s one thing. But when it happens to a group that has greater access to media attention, it’s another,” said Yuval Shany, the dean of the law faculty at the Hebrew University of Jerusalem and a member of the United Nations Human Rights Committee, a group of experts that monitors compliance with international human rights standards. “A lot more attention was paid to these allegations than to parallel allegations by Palestinians.”

Lawyers for the three Jewish youths detained in November alleged last week that their clients were deprived of sleep, blindfolded and beaten. At least one of them, Elisha Odess, has dual Israeli-American citizenship. His family maintains he is innocent.

Supporters of the youths, who are being held without charge – a practice known as administrative detention that is normally reserved for Palestinian terror suspects – have stirred some sympathy in light of the allegations. A protest rally in Jerusalem last week drew hundreds, and a right-wing American pro-Israel group, Americans for a Safe Israel, organized a vigil outside the Israeli Consulate in New York.

Moshe Feiglin, a one-time contender for the leadership of the ruling Likud party, bemoaned the allegations of detention in an Op-Ed in the Jewish Press, an Orthodox New York weekly.

“What kind of state will be left after this horror, taking place with the authorization and oversight of the ‘law’?” Feiglin asked.

The Shin Bet, Israel’s main internal security agency, denied the allegations in a rare statement, calling them “lies,” and the prevalent reaction among Israeli leaders was to side with the agency. Naftali Bennett, an Israeli Cabinet minister and leader of the pro-settler Jewish Home party, defended the agency in a statement typical of a political class that, with exceptions only on the margins, tends to defer to the security establishment as the best guarantor of the country’s safety.

“Those who, like us, support the Shin Bet’s actions on Palestinian terrorism, whose objective is to save Jewish lives, can’t oppose them when they’re applied to Jewish terrorism,” Bennett said at a conference for Orthodox educators, according to the Times of Israel.

David Haivri, who lives in the West Bank settlement of Kfar Tapuach, said there has been a mix of reactions among settlers, in part because of an appreciation of the Shin Bet’s role in quelling Palestinian terrorism.

“If this case of suspected Jewish terror hadn’t come up, many would have been content with ignoring or even supporting the need for torture when interrogating [Arab] terrorists,” Haivri said in an interview. “Now this case has caused a predicament.”

The deference to the security establishment extends to mainstream American Jewish organizations, with groups that tend to pronounce on human rights issues – including the Anti-Defamation League, the American Jewish Committee and the Jewish Council for Public Affairs – declining to comment on the charges.

Americans for a Safe Israel involved itself only because of its familiarity with the communities where the suspects lived, said Judy Kadish, a member of the group’s board of directors.

“We tend to be action oriented, and knowing so many of the people in these settlements, knowing they’re very good people and of very fine character, and they’re religious Zionists, we felt this was what we should do,” Kadish said.

Kadish said she did not expect the issue would continue to be a priority for her organization as it has become for left-wing groups, who have seized on the allegations to advance a wider campaign against Israeli interrogation methods. Rabbi Jill Jacobs, who directs T’ruah: The Rabbinic Call for Human Rights, joined the Americans for a Safe Israel vigil, in part to make clear that torture is unacceptable regardless of the victim.

B’tselem, the leading Israeli human rights group in the West Bank and Gaza Strip, launched a campaign to show that Palestinian allegations exactly parallel those of the youths in the Duma case.

“People under interrogation must not be subjected to abuse and torture, no matter what,” the group said on Twitter, captioning a picture of a man handcuffed to a chair with a quote from a Palestinian describing sleep deprivation methods similar to those that lawyers for the Duma suspects have related.

Naomi Paiss, a spokeswoman for the New Israel Fund, which helps fund B’Tselem, among other groups, said its American donors are keenly interested in the allegations. She said the donors also favor greater Israeli scrutiny of the extremist community that produced the Duma murderers and their enablers.

“Human rights are human rights,” Paiss said. “It’s so cynical for the Israeli government to make human rights a leftist issue. Torture is torture. You don’t use it, period.”