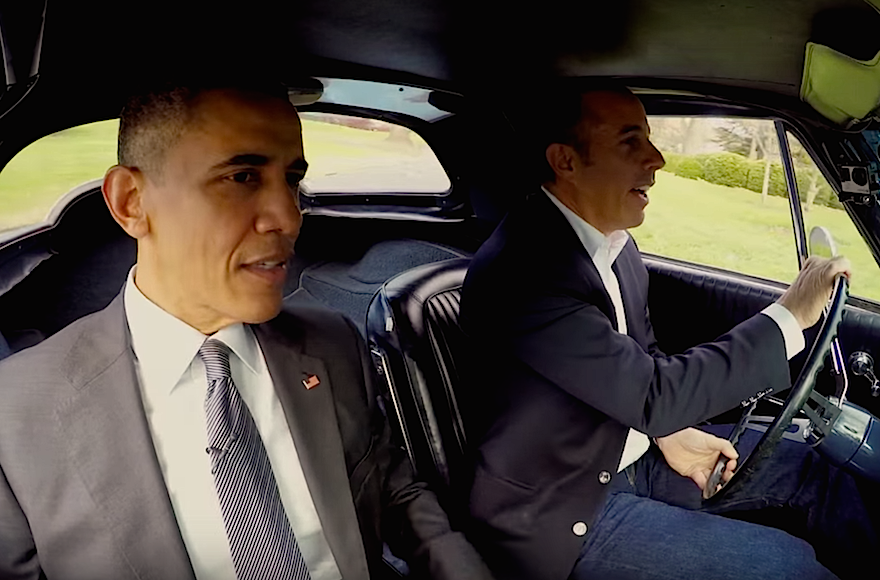 President Obama with Jerry Seinfeld in an episode of "Comedians in Cars Getting Coffee." (Screenshot from YouTube)
Advertisement

Apparently, President Obama thinks Jerry Seinfeld could have been a Jewish Orson Welles.

The commander-in-chief went on Seinfeld’s web series “Comedians in Cars Getting Coffee” (a title that tells you everything you need to know) for the show’s seventh season premiere Wednesday.

Obama — who Seinfeld says qualified for the show with jokes from previous White House Correspondents dinners — holds his own in a candid conversation with the Jewish king of comedy.

“At a certain point,” Obama says to Seinfeld in a part of their conversation about fame and money, “you might have thought to yourself, ‘I’m more than just a comedian, I’m going to make a Jewish version of “Citizen Kane.’ How did you keep perspective?”

“I fell in love with the work,” Seinfeld responds. “And the work was joyful and difficult and interesting, and that was my focus.”

The pair get into a host of other humorous topics in their drive around the White House grounds, from Obama’s thoughts on world leaders who have lost their sanity to his love for nachos. The president even describes how co-Seinfeld creator Larry David “lathers himself in sunscreen” while playing golf.

“It’s caked white all over and it catches parts of his ears, and there’s big globs of it,” Obama says.

In a typical episode of the show, Seinfeld takes a well-known comedian on a drive in a vintage car to a café or restaurant. Due to obvious security constraints, Seinfeld’s attempts to drive Obama away from the White House (“Just tell [the guard] you’re the president”) fail. Instead, they drive around the presidential mansion in a light-blue 1963 Corvette Stingray and get coffee in a White House cafeteria.

Obama has appeared on other comedian’s shows in recent years, including Zach Galifinakis’ “Between Two Ferns” web series and Marc Maron’s “WTF” podcast, to sell Obamacare to a young audience. On Wednesday, Seinfeld made the pitch for him, turning to the camera to say: “Please try Obamacare today.”

In a telling exchange, Seinfeld asks the president: “Do you ever think about: Every person you talk to is putting on an act, a total show?”