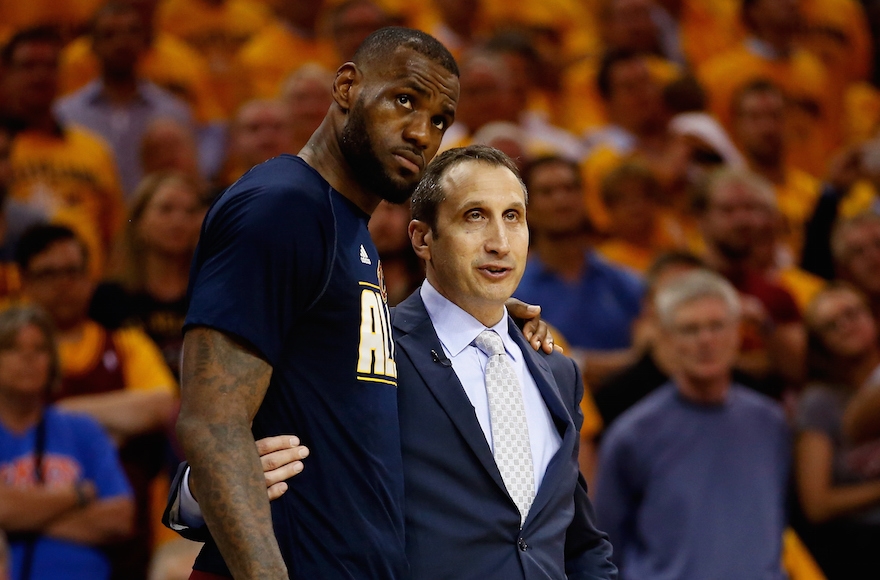 LeBron James and his Israeli-American coach David Blatt speaking late in the fourth quarter of a game against the Atlanta Hawks during the NBA's Eastern Conference Finals, May 26, 2015. (Gregory Shamus/Getty Images)
Advertisement

(JTA) — The Cleveland Cavaliers fired Israeli-American head coach David Blatt, who led the team to the NBA Finals last season and to the best record in the Eastern Conference midway through this one.

Blatt confirmed that he was fired Friday in an announcement by his agency. He also released a statement thanking the Cavaliers.

“I am very grateful to have had the opportunity to serve as the Head Coach of the Cleveland Cavaliers,” Blatt said in the statement. “I’d like to thank Dan Gilbert and David Griffin for giving me this opportunity and am honored to have worked with an amazing group of players from LeBron James, Kyrie Irving and Kevin Love through our entire roster. I’d also like to express my extreme gratitude to my coaching staff. I am indebted to them for their professionalism, hard work, loyalty and friendship. I am proud of what we have accomplished since I have been the Head Coach and wish the Cavaliers nothing but the best this season and beyond.”

Assistant coach Tyronn Lue will take over as head coach, having agreed to a three-year deal, according to Yahoo! Sports.

Many Cavaliers players, especially the veterans, felt that Blatt was unprepared for the job and questioned whether he knew the NBA well enough to guide them to a championship, ESPN reported.

READ: Why the NBA Finals are a lose-lose situation for David Blatt

Blatt took Maccabi Tel Aviv to an improbable Euroleague championship in 2014 before becoming the first coach to leap from that league to an NBA head coaching position later in the year.

Growing up a Boston Celtics fan in Framingham, Massachusetts, Blatt played high school basketball and attended Hebrew school at Temple Beth Am. He went on to play point guard at Princeton University.

During college, Blatt played for a kibbutz basketball team in the summer. He won a gold medal in the 1981 Maccabi Games with the U.S. basketball team.

Blatt played 9 of the next 12 years in Israel, before retiring in 1993 to become a coach. He coached in Israel, Russia and around Europe. As head coach of Maccabi Tel Aviv, Israel’s dominant professional basketball team, Blatt became a local celebrity and won respect around the world.

After initially struggling to adapt to the NBA game, the Cavaliers under Blatt made it to the 2015 NBA Finals, where they lost to the Golden State Warriors in six games. So far this season, they have the best record in the Eastern Conference.