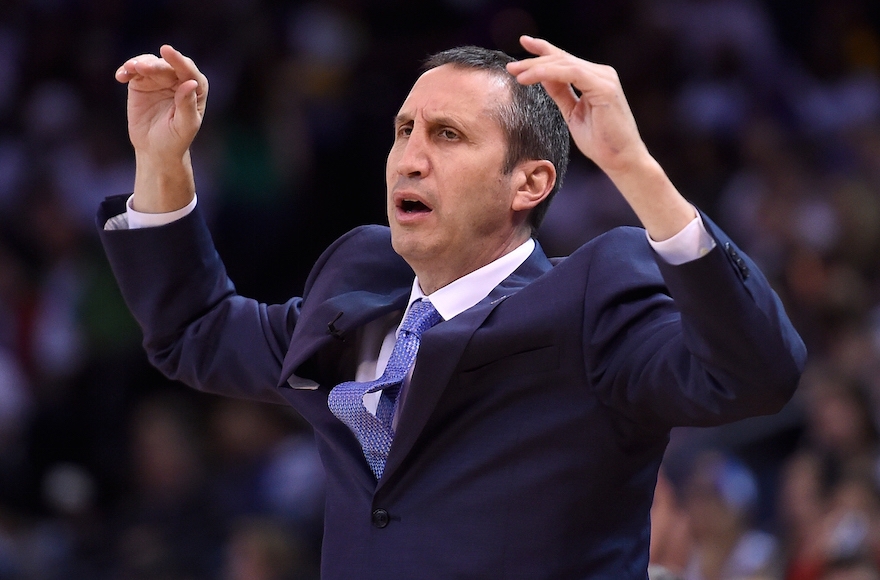 “You get a thrill when he’s running up the court,” said Bargman, the managing director of a public-relations firm in the city.

Bargman was talking not about Cleveland’s star forward, LeBron James, but about the head coach, David Blatt, who reached the NBA following a nearly 30-year career in Israel as a player and a coach.

The Israeli pride remains, but forget about any more Cavs’ games for Bargman. A friend’s text message at 4 a.m. Saturday woke Bargman with the news that Blatt had been fired after leading the Cavs for just a season and a half, including to a 30-11 record this season — the best in the Eastern Conference.

The dismissal of Blatt, who led Maccabi Tel Aviv to the 2014 Euroleague championship in an upset, has stunned Israelis. After all, in his Cavs’ tenure, he had racked up an 83-40 record — the seventh-best winning percentage (.675) in NBA history. In his first year, he guided the Cavs to just their second appearance in the NBA Finals.

So what doomed Blatt in Cleveland, where he wore his Israeli identity on his sleeve, pointedly called on Israeli reporters in news conferences during the playoffs and responding to their questions in Hebrew?

Some Israeli fans are pointing at James, saying he undermined the coach – and worse.

Blatt had been hired in the summer of 2014, fresh off his Maccabi crown, to develop a young team steadily recovering from James’ 2010 departure for the Miami Heat. The Cavs had just drafted Kansas guard Andrew Wiggins with the No. 1 overall pick.

James, a native of Akron, Ohio, returned to his home area as a free agent after leading the Heat to two NBA titles. And in an effort to make an immediate run at the championship, the Cavs’ general manager, David Griffin, opted to rebuild around veterans: He brought in All-Star forward Kevin Love from Minnesota in exchange for Wiggins and others.

That summer, James rebuffed Blatt’s offers to meet. During the season, James changed plays called by Blatt — a habit brought to a dramatic climax in the closing seconds of a nationally televised conference semifinal game against the Chicago Bulls in which James hit the game-winning shot at the buzzer. James told journalists he scrapped the play in the huddle.

“If I had salespeople not following the plan, that wouldn’t be acceptable behavior, for sure,” said Mark Mayerfeld, who manages a 12-person sales and account staff for Trader Tools, a software company in Raanana. “You’ve got to follow the plan. If you don’t, you’ll be fired.”

Another Israeli, marketing executive Barry Spielman, added: “I don’t think this would be accepted in any workplace: not in the army, not in business, not in government. It’s insubordination of the highest order.

“You can’t have a prima donna on a sports team. Blatt’s mistake is that he didn’t put LeBron James in his place last season. He didn’t call him out. Eventually he lost the confidence of the team. Once he lost the team, he probably lost the management.”

One Israeli voice of dissent was Yediot Acharonot columnist Sharon Davidovitch, who cited the hard reality of the National Basketball Association being a star-driven league.

“It was the right decision, but it was cold, it was painful and – there’s no other way to say it – insulting,” he wrote, adding that the most important thing is “for the star to be happy enough to bring the team a championship.

“Can the inexperienced [Blatt replacement] Tyronn Lue help him get there? It’s uncertain. But for the moment, it makes LeBron happy. And that’s what’s important.”

In an interview Monday on ESPN’s “Mike & Mike” program, Griffin said Blatt’s firing was not “a panic move.”

“I recognized where our spirit was,” Griffin explained. “What I don’t think we have is a swag and a belief in one another. You watch Cam Newton: He is the identity of the Carolina Panthers, and he has absolutely no fear. We play the best teams in this league, and we don’t play like that right now.”

Indeed, said Tal Brody, formerly a star player for Maccabi Tel Aviv, the Cavs losing by 34 points to last year’s champions, the Golden State Warriors, in a home game last week “was a backbreaker” for Blatt in Cleveland. Brody said he sent Blatt a supportive email after the firing but hasn’t heard back.

Blatt is hardly the first coach in U.S. professional sports to be fired despite winning consistently. The Warriors dismissed Mark Jackson following their 51-31 finish in 2013-14 – 28 more wins than he registered two seasons earlier. Casey Stengel famously told reporters he had been informed that “my services were no longer desired” after leading the New York Yankees to within one run of a World Series title in 1960 that would have been his eighth championship in 12 years.

Blatt, though, was a landsman representing tiny Israel in one of the world’s best-known sports leagues. His wife and children still live in Israel.

And he had earned his shot at the big time: Along with the Euroleague title prized by Israelis, he delivered Russia a bronze medal in the 2012 Olympics and had won league championships in Israel, Italy and Russia. Shortly after the firing, rumors began linking Blatt to the Brooklyn Nets’ head-coaching vacancy.

“He’ll have to earn his stripes again [with] another NBA team, a team that’s middle of the pack or lower end — and I think he’ll be successful at it,” Mayerfeld said. “He’s been a winner his whole life. I see him having success in the NBA still.”