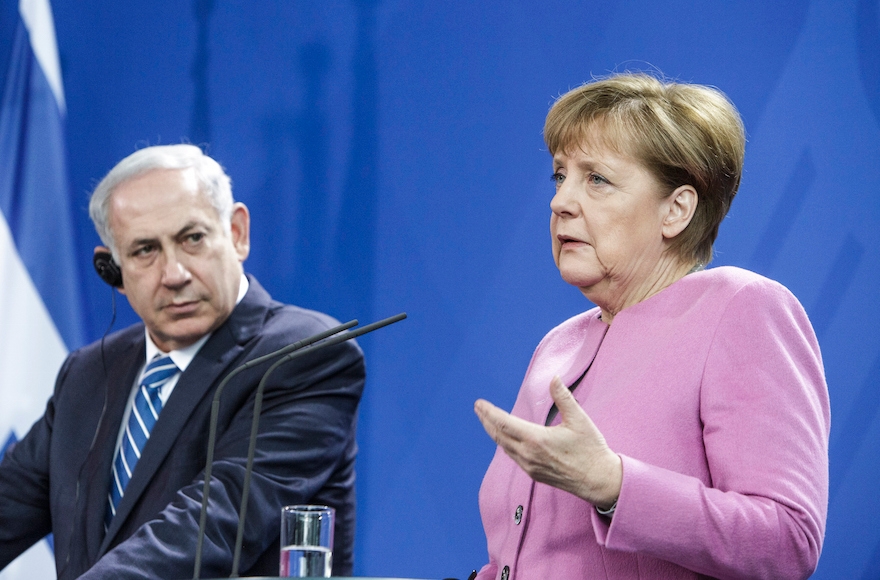 (JTA) — German Chancellor Angela Merkel called for Israel to take small steps toward a two-state solution with the Palestinians.

Merkel was speaking to reporters in Berlin at a news conference Tuesday with Israeli Prime Minister Benjamin Netanyahu following a joint session of their two governments.

“Now is certainly not the time to make really comprehensive progress,” she said, “but you can achieve improvements in certain places.”

“The European Union, and Germany as a member state, is very concerned about seeing things realistically. We know the threat of terrorism that Israel has to endure. We believe, on the other hand, that we have to advance a process of peaceful coexistence, and this, according to our opinion, is ultimately built on a two-state solution.”

Merkel emphasized that Germany is willing to pitch in financially to any efforts that advance the cause of a peaceful two-state solution.

The German chancellor also said her country will only normalize relations with Iran when it recognizes the State of Israel.

“We made very clear — the federal government, all parties that make up the coalition — that there cannot exist normal, friendly relations with Iran as long as Iran doesn’t recognize Israel’s right to exist,” Merkel told reporters.

Germany and Iran have resumed diplomatic contact after the deal reached with world powers to curb the latter’s nuclear program, but Merkel emphasized that Iran’s hostility to Israel remains a wedge between the countries.

“There is difference between friendship and talking to each other,” she said.

Netanyahu praised Merkel’s statements on two-state solution negotiations and rejected a French plan introduced earlier in the day aimed at bringing Israel and the Palestinian Authority back to the negotiating table as soon as possible, the Times of Israel reported.

The plan stipulated that if Israel did not agree to new rounds of negotiations, France would recognize Palestine as an independent state. Netanyahu called the proposal “bizarre.”

“Of course this ensures that this conference will fail because if the Palestinians know that their demand will be met a priori, and they do not need to do anything, then there is certainly an internal contradiction here, because they will not do anything. There is one way to advance peace – direct negotiations without preconditions between the sides,” he said.

The joint session, the sixth for the two governments, celebrated the cooperation between Israel and Germany.

“When we are in Germany, we know we’re among good friends,” Netanyahu said following the meeting. “These regular G2G meetings are a testament to the unique partnership which we have today between our nations, and they clearly demonstrate the breadth and scope of the cooperation between our two countries.”

During the meeting, “both sides agreed that the preservation of the memory of the Shoah for future generations continues to be a pillar of their relationship. In this context, Germany emphasized its commitment and special responsibility to Israel as a Jewish and democratic state and to its security,” the Prime Minister’s Office said in a statement.

“Both sides also strongly reaffirmed that any challenge to the right of existence of the State of Israel is unacceptable. Against the backdrop of unrest and terrorist threats in the region, both sides expressed their hope for Israel’s peaceful coexistence with all its neighbors.”