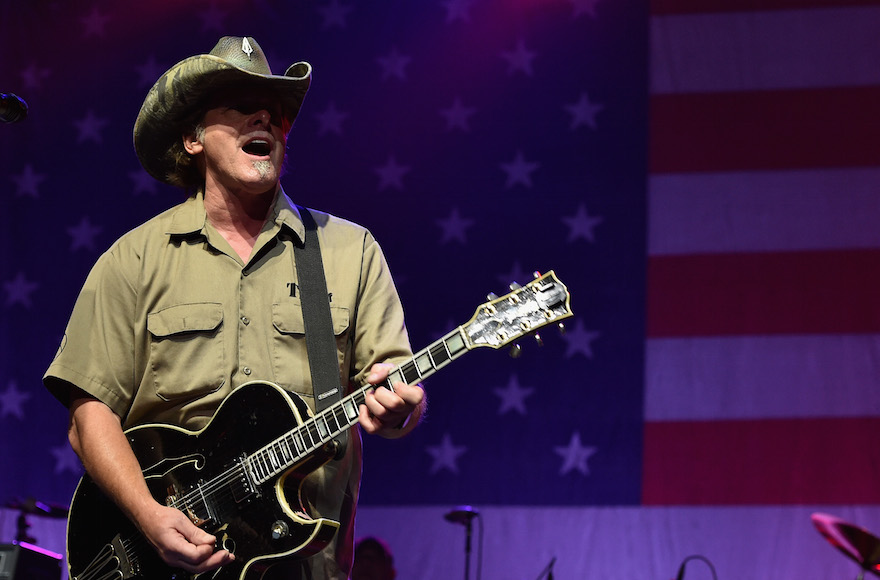 Nicki Kenyon of the Zelman Partisans group wrote Monday that Nugent accepted the group’s honorary membership offer. The right-wing rocker also reportedly said he would wear kippah with the group’s logo on television.

“Know these punks. They hate freedom, they hate good over evil,” Nugent wrote in the post. “They would deny us the basic human right to self defense & to KEEP AND BEAR ARMS while many of them have tax paid hired ARMED security! Know them well. Tell every1 you know how evil they are. Let us raise maximum hell to shut them down!”

Nugent took to Facebook again after the initial response to his post and wrote: “Plummet on punks. Plummet on. Meanwhile I adjust my yamika [sic] at my barmitzva [sic] playing my kosher guitar. My dad killed nazis & saved Jews in WWII. Eat me.”

Kenyon claimed in a blog post on the Zelman Partisans website that Nugent, who was criticized by the Anti-Defamation League and the Simon Wiesenthal Center, among others, does not have “an anti-Semitic bone in his body” despite the fact that he posted an admittedly anti-Semitic image.

“Can I say oy vey?” Kenyon quoted Nugent as saying in a phone conversation. “I sincerely apologize for my irresponsible re-posting of such a nasty and offensive meme. In my rush between songwriting jams and musical recording frenzy, all I saw was the images of people dedicated to disarm us, I made no connection whatsoever to any religious affiliation. Everyone knows deep down that at 67 years of age I didn’t suddenly become anti-Semitic. That’s patently ridiculous, and those who rushed to such a mistaken condemning judgement should re-examine the system by which such equally irresponsible knee-jerk judgments are made.”

Kenyon wrote that her group sent Nugent a membership packet and a kippah.