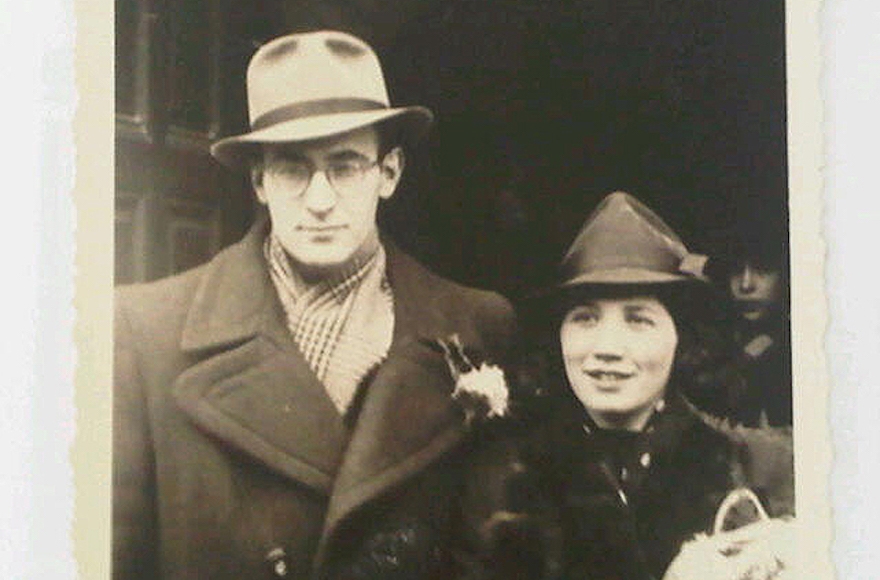 Louis and Flora Barzelay photographed in Amsterdam, May 31, 1942. (Courtesy of Stans Barzelay)
Advertisement

AMSTERDAM (JTA) — Two months before they were deported from the Netherlands to Auschwitz, Louis Barzelay and Flora Snatager invited a few guests to their wedding in Amsterdam.

Instead of the yellow star he was legally required to wear, Louis wore a white flower on his lapel as he posed with Flora in a doorway for their wedding photo. Flora is smiling faintly and looking slightly to the side while Louis stares straight at the camera, his lips pursed. It was May 31, 1942.

For more than 70 years, the photo was all that remained of the young couple, who were murdered along with other relatives four months after it was taken. But that changed last month, when the couple’s wedding guest book turned up in a thrift shop near Amsterdam and was returned to the family thanks to a massive response on social media.

“I was totally unprepared for what happened after I posted that message on Facebook, in which I asked for help in tracking down the family,” said Bob Baars, the manager of the Kringloper Almere, a three-story shop situated 15 miles east of the Dutch capital.

Within hours of the Jan. 25 posting, Baars and his staff were inundated with emails and calls from across the Netherlands and beyond, either seeking or offering information about the guestbook, a pocket-sized volume whose first page contains the couple’s names inside a blue, hand-drawn Star of David with the Hebrew and Gregorian calendar years.

Several local media outlets reported on the unusual find, resulting in a record surge of more than 300,000 views of the Kringloper’s post about the booklet. Of those, some 3,300 shared the post on their own Facebook pages.

Thanks to the publicity, Baars was able to speak with surviving descendants of Louis and Flora mere hours after posting and to return the booklet to them.

“World War II remains a very live issue, especially the Holocaust, at a time of rising anti-Semitism,” said Baars, who hopes his effort to locate the couple’s survivors will serve as a message against hate.

The guestbook’s emergence comes amid a number of developments related to the Holocaust in the Netherlands, which lost 75 percent of its 140,000 Jews during the war, the highest death rate in Nazi-occupied Western Europe. 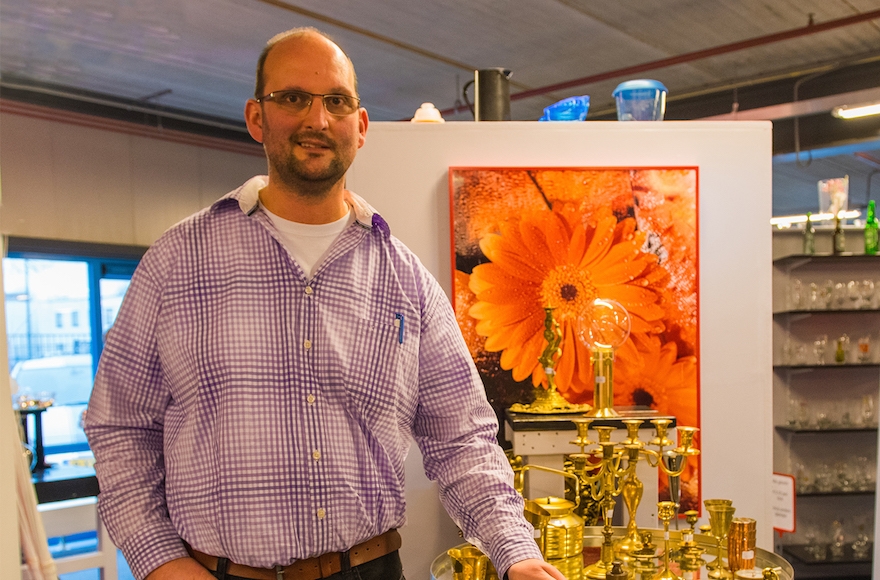 Amsterdam is preparing to open its first Holocaust museum in 2018, as well as the city’s largest monument for the genocide. Earlier this month, the municipality launched a campaign to track down Jewish families who were fined after the war for failing to pay taxes while they were in concentration camps or in hiding. The 2013 revelation of that practice led to another discovery this month that the city had dramatically raised the rents of Jews who were forced to move into the ghetto.

Meanwhile, calls have intensified recently for the Dutch prime minister to apologize for the wartime actions of collaborationists — including thousands of policemen — who helped send Jews to their deaths.

“It’s as though there was a long silence, and now the dam has broken,” said Stans Barzelay, Louis Barzelay’s niece, who received her uncle’s booklet from Baars last month.

Barzelay, who also chairs the Amsterdam branch of the Women’s International Zionist Organization, heard about Baars’ discovery from friends.

“I turned off my cellphone for a couple of hours that day,” Barzelay recalled. “When I opened it I saw an onslaught of missed calls, texts, Facebook messages and tweets.”

To thank the thrift shop’s staff, Barzelay had a tree planted in Jerusalem’s Peace Forest by the Jewish National Fund. A certificate from the JNF sits on Baars’ desk.

Barzelay said she was overcome with emotion when she opened the booklet and thought of her late father, Louis’ brother Sally, a Holocaust survivor who escaped the Westerbork concentration camp in eastern Holland.

“For years, my father expected Louis to return,” Barzelay said. “He thought he’d survive because he was such a strong man.”

Official word of Louis’ death came only six years after the war.

“It’s something tangible from people whom I never knew except in stories,” Barzelay said of the booklet.

Yet Barzelay is not sad that her father isn’t alive to see the book’s return.

“Maybe it’s better this way,” she said, explaining that like many Holocaust survivors in the Netherlands, her father preferred not to speak of that period. “I’m afraid this would’ve been too difficult for him to handle.”