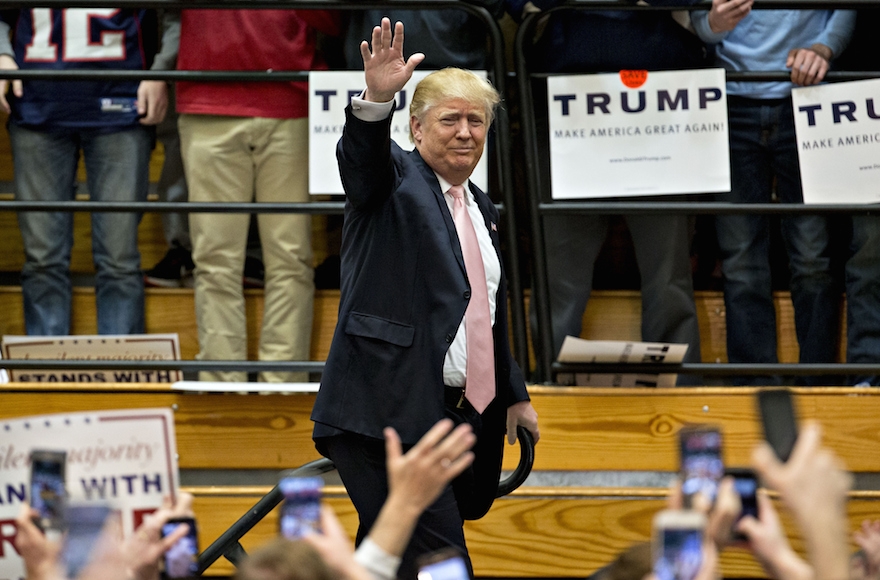 WASHINGTON (JTA) – Donald Trump’s surging candidacy has sent shivers through the ranks of the Republican elite and created deep anxiety among Jewish Republicans, some of whom are so unnerved they are prepared to vote for Hillary Clinton if Trump wins the nomination. Yet others say that despite Trump’s promise to be “neutral” on Israel and his support from white supremacists, conservative principles demand deference to the eventual nominee.

“As boorish as he is, as occasionally foolish as he is, and how vituperative he can be, I would vote for Donald Trump over Hillary Clinton any day,” said Ari Fleischer, a former spokesman for President George W. Bush and a board member of the Republican Jewish Coalition.

Fleischer said he was speaking only for himself, not the RJC, which declined JTA’s request for comment.

For other Jewish conservatives, Trump is too unpalatable to support, and for obvious reasons. Trump has refused to side unequivocally with Israel, declining at a recent campaign event to pin blame for the Middle East conflict on either Israel or the Palestinians, saying instead that he wished to remain “neutral.”

His conservative credentials are shaky, having previously favored abortion rights and argued for the imposition of tariffs, which is anathema to the business community. And Trump’s rhetoric has won support for the billionaire real-estate magnate from quarters not known for their deference to Jewish sensitivities, including former Ku Klux Klan leader David Duke and National of Islam head Louis Farrakhan.

READ: Super Tuesday 2016: How each candidate hopes to trump Trump

In an editorial this week, William Kristol, the neoconservative scion who runs The Weekly Standard, said the party must be saved from “a charlatan and a demagogue.” The Emergency Committee for Israel, which Kristol founded, also released a video this week featuring clips of Trump speaking favorably of Syrian President Bashar Assad, former Libyan strongman Moammar Ghadafi and Saddam Hussein.

“For this former Republican, and perhaps for others, the only choice will be to vote for Hillary Clinton,” Robert Kagan, a veteran of the Reagan State Department and now a senior fellow at the Brookings Institution, wrote last week in widely shared Washington Post Op-Ed. “The party cannot be saved, but the country still can be.”

Jonathan Tobin, the online editor at Commentary, a conservative magazine that does not take positions on candidates, said he was doubtful Trump would garner much support from Jewish Republicans.

“There are the Jewish Republicans who are focused on foreign policy, on economic policy – the sense among that group is that Trump doesn’t speak for them,” Tobin said. “And the question is, if he is the nominee – and right now it looks like it – will they vote for him. And I suspect a lot won’t.”

A Jewish Republican operative who spoke on condition of anonymity said more than one Republican would secretly cast a vote for Clinton should Trump secure the nomination.

“We would prefer we have mainstream candidates who don’t devolve into demagoguery, ethnocentrism and racism,” said the operative, referring to Trump’s recent equivocation over the Duke endorsement.

Trump last week brusquely disavowed Duke at a news conference. But in an interview Sunday on CNN, he professed not to know who the former KKK leader was. Then Trump again disavowed Duke on Twitter after the interview aired, chalking up the discrepancy to a faulty earpiece. The following day, the Anti-Defamation League issued a list of extremists that candidates were advised to steer clear of, with Duke’s name at the top of the list.

Some Republicans have floated the idea that a Trump candidacy could help rally votes for congressional Republicans, the logic being that Trump is so unappealing, he practically guarantees a Clinton presidency – and that in turn strengthens the case for GOP control of the legislative branch as a means to rein her in. Tobin was skeptical.

As much as Trump repels some Jewish Republicans, he could still command their support, if only because expectations of party loyalty run so deep. Fred Zeidman, a Houston businessman who supported former Florida Gov. Jeb Bush, said propriety demanded deference to the winner.

“I won’t say anything negative about Donald Trump any more than other [Republican] candidates,” Zeidman said. “I wish he had a different approach, but in America you get to vote, and if most Republicans want to get Donald Trump, that’s what it is. And the fact of the matter is we have to go on to defeat the Democratic candidate.”

Some Jewish Republicans remain reluctant to declare. Republican mega-donor Sheldon Adelson, who is said to be wavering between Sens. Marco Rubio of Florida and Ted Cruz of Texas, took care to cover his ballot sheet when he attended the Nevada caucus last week. But a Wall Street Journal reporter was able to see him check a box on the ballot’s lower third, which included the names of Rubio, Trump and former Pennsylvania Sen. Rick Santorum, who has quit the race.

Still, Trump is a shock to the system for a Jewish constituency that has prided itself on shaping the party in recent years as unassailably correct on Israel and open to diversity. Fleischer co-wrote a report after the last election on how to reach out to minorities.

“He’s given a lot of people a lot of reason to pause and question whether he is a supporter of Israel,” Fleischer said.

“The word neutrality is fingernails across a chalk board in the Jewish community. It screams at you, and it sends up all kinds of warning flags about who he is and what he believes.”

Norm Coleman, a former Republican senator from Minnesota who backs Rubio, said the fight was not over.

“I won’t speak about the unspeakable and I still believe that my party is not going to nominate Donald Trump,” Coleman said. “The prospect of Trump leading our party is deeply troubling. It would be destructive of the party and would harm the nation, and give us four more years of Clinton-Obama foreign policy, which has gravely weakened us in the world and undermined our allies.”