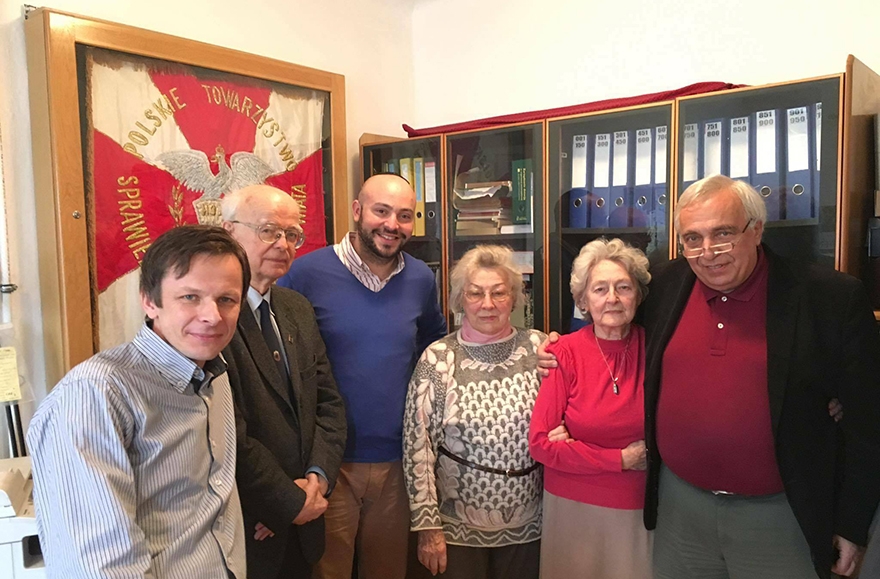 Jonny Daniels, third from left, with Righteous among the Nations and a volunteer on March 1 in Warsaw. (Mike Litorus)

(JTA) — An organization promoting Holocaust commemoration in Central Europe pledged to provide new offices to an association of Poles who jeopardized their lives to save Jews during the Nazi genocide.

Jonny Daniels, founder of the From the Depths group, on Sunday said his organization had decided to allocate an open-ended subsidy of approximately $15,000 annually for a new office space for the Polish Society of the Righteous Among the Nations. Righteous Among the Nations is a title conferred by the State of Israel on non-Jews who risked being murdered for helping Jews survive the Nazi-led persecution during World War II.

Founded in 1985, the association is currently  run from a 280-square feet room on the second floor of a building without an elevator on Warsaw’s outskirts. This has prevented some of the members, who are all older than 80, from being able to attend meetings, according to Anna Stupnicka, a member of the association who helped hide three Jews in her apartment and smuggled food into the Warsaw Ghetto.

Since the confinement to a wheelchair of a 100-year-old member of the association, other members have been forced to hold meetings in the building’s lobby so he may also attend, she said.  “All we want in our life is to share our stories. It’s very difficult to do it without support. Each month we are not sure if we will keep our small office,” she added.

Daniels’ group also allocated roughly $2,500 this year to sending flowers to each one of Poland’s some 250 living Righteous on their birthdays. He said this will be an annual expense.

“The former Polish administration spent eight years in talks and public debates about building monuments” for the Righteous, Daniels said, adding he hoped that “the new administration will not shirk its responsibility in honoring these heroes while it still can.”

Roughly 6,500 Poles have been recognized as Righteous Among the Nations – the highest number of any country.