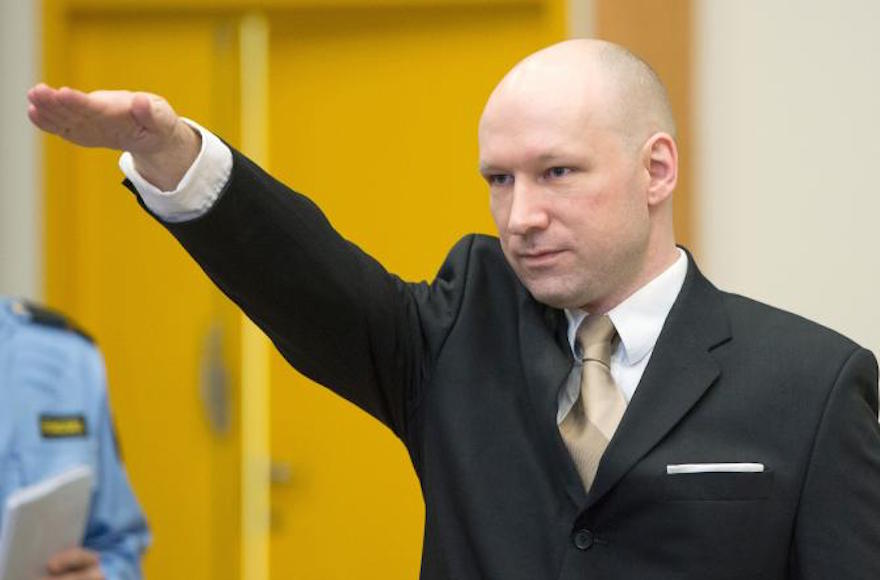 Norwegian mass killer Anders Behring Breivik making a Nazi salute as he arrives to a makeshift court in Skien prison, southwest of Oslo, for his lawsuit against the Norwegian state, March 15, 2016.
Advertisement

Breivik, making his first public appearance since he was sentenced in 2012 to 21 years in prison, was in court Tuesday to challenge his solitary confinement, which his lawyer in court called “worse than the death penalty.” His time outside the cell, which has a television and computer, is limited to one hour a day.

His sentence can be extended at the discretion of the court if he is still considered a danger to society.

Breivik killed 77 people in  2011 when he detonated a car bomb in central Oslo before going on a shooting spree at a Labour Youth camp on the island of Utoeya.

His attorney, Oeystein Storrvik, told Reuters he had advised his client against making the Nazi salute.

“He says he is a national socialist,” the attorney told Reuters, adding that making the gesture was “the worst thing you can do in a courtroom.”

Breivik made a variation of the Nazi salute several times during his 2012 trial by holding his closed right fist to his chest and then extending his arm.

In numerous online postings, including a manifesto published on the day of the attacks, Breivik promoted the Vienna School or Crusader Nationalism philosophy, a mishmash of anti-modern principles that also calls for “the deportation of all Muslims from Europe” as well as from “the West Bank and the Gaza Strip.” The Vienna School supports “pro-Zionism/Israeli nationalism.”

He reportedly has radicalized in prison, recently describing himself as a “militant nationalist,” according to The Local-Norway, citing the Nazi salute as proof.