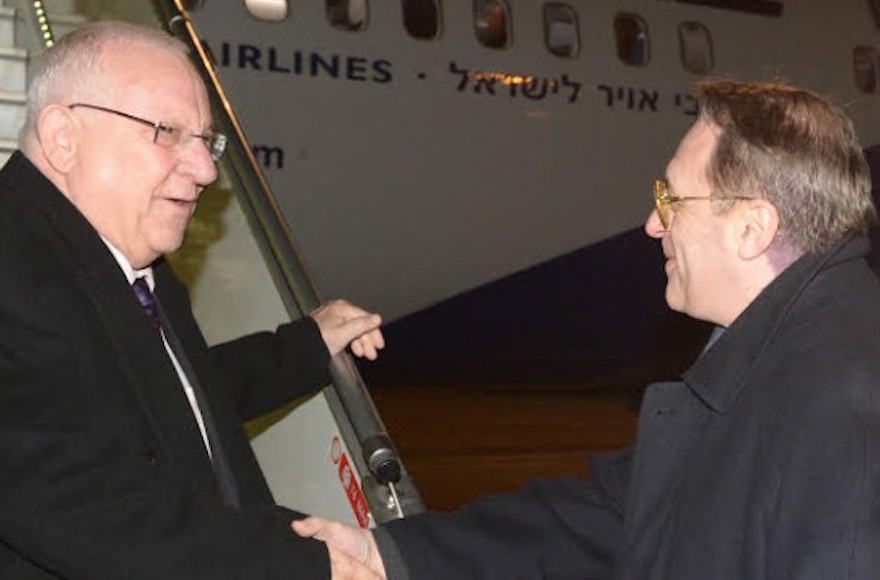 (JTA) — Any future peace agreement in Syria must not end up strengthening Iran and Hezbollah, Israeli President Reuven Rivlin will tell Russian President Vladimir Putin when they meet in Moscow.

With Wednesday’s meeting, Rivlin will be the first international leader to meet with Putin since his surprise announcement on Monday that Russia will withdraw most of its troops from the civil war in Syria.

“We want Iran and Hezbollah not to emerge strengthened from this entire process,” Rivlin told reporters on a flight Tuesday to Moscow. “Everybody agrees that the Islamic State organization is a danger to the entire world, but Shiite Iranian fundamentalist Islam is for us just as dangerous.”

A senior official who wished to remain anonymous told Haaretz that Israel is not fully aware of Russia’s future intentions in Syria. Rivlin’s goals in the meeting will include discerning Putin’s immediate plans and a joint plan of action for the “day after” the Syrian war ends.

“Given the situation we’re in, we have to coordinate with Russia,” Rivlin said on the plane.

Israel’s military chief of staff, Lt. Gen. Gadi Eisenkot, told a meeting of the Knesset Foreign Affairs and Defense Committee on Tuesday that Israel was caught off guard by the Kremlin announcement.

“We had no prior information about the Russian announcement of a reduction in its involvement, just as others didn’t,” Eisenkot said.

Haaretz reported that Russia will retain control of two military bases in Syria and gradually retract its troops from the region.