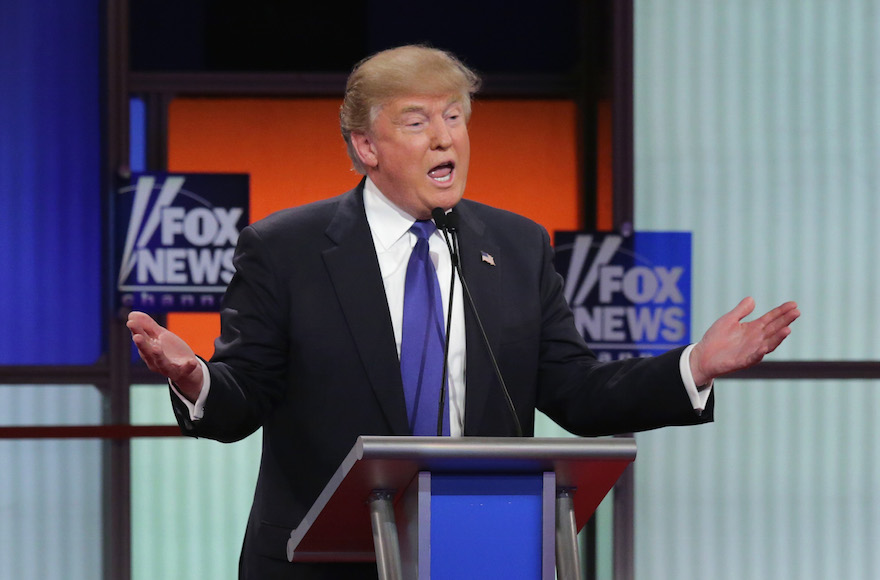 (JTA) — After Donald Trump said he would skip the next Fox News debate to speak at the AIPAC conference, the network cancelled the debate.

Meanwhile, the American Israel Public Affairs Committee added Sen. Ted Cruz, R-Texas, to the roster of presidential candidates who will address the conference being held March 20-22 in Washington, D.C.

Trump told the “Fox and Friends” morning program during a telephone interview Wednesday that he would not attend the debate, the 13th for Republican presidential contenders held this season. The debate had been added to the schedule last month.

“I’m making a very major speech in front of a very important group of people,” he said, confirming the speech was to the annual AIPAC conference. Trump said the speech “was scheduled a while ago.”

“This morning, Donald Trump announced he would not be participating in the debate,” Fox said in a statement Wednesday. “Shortly afterward, John Kasich’s campaign announced that without Trump at the debate, Kasich would not participate. Ted Cruz has expressed a willingness to debate Trump or Kasich — or both. But obviously, there needs to be more than one participant. So the Salt Lake City debate is cancelled.”

Trump has openly feuded with Fox News and its host Megyn Kelly, who was to moderate the debate.

Dan Senor, author of the book “Start-up Nation” and a former adviser to the Mitt Romney campaign, suggested in a tweet that Trump had a choice of time slots for the AIPAC convention and chose to speak at a time that conflicts with the debate.

In addition to Cruz and Trump, Hillary Clinton, the former secretary of state and the Democratic front-runner, is scheduled to speak at the conference. Other politicians scheduled to speak are Vice President Joe Biden; the speaker of the U.S. House of Representatives, Rep. Paul Ryan, R-Wis.; the majority leader, Rep. Kevin McCarthy, R-Calif., and the minority whip, Rep. Steny Hoyer, D-Md.

AIPAC invited all the presidential candidates to speak. There is no word yet on whether Kasich, who is running third behind Trump and Cruz in the GOP race, and Sen. Bernie Sanders, I-Vt., who has mounted a strong challenge to Clinton, will address the conference.