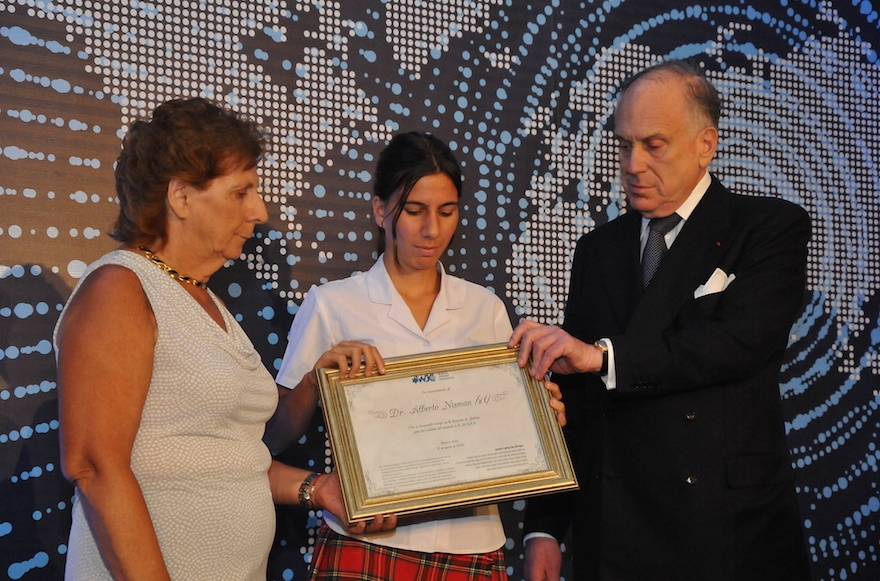 “Everything that happened made us look weak in the world,” Macri told The Associated Press as part of a long-ranging interview published Thursday. “But now we are determined to bring what happened to light.”

The Argentine judiciary has not yet determined whether Nisman’s shooting death in January 2015 was a homicide or suicide.

Macri discussed the Nisman case and the 1994 Jewish center bombing, as well as the 1992 attack on the Israeli Embassy, during his address Tuesday night to the opening gala of the Plenary Assembly of the World Jewish Congress in Buenos Aires. Both attacks in the Argentine capital remain unresolved.

“Here, we suffer the ravaging consequences of two bomb attacks. We are still in the dark of what happened,” Macri declared, adding: “We are fully committed to contribute in any way we can to make headway with this investigation.”

He also reminded his audience that his government, during its first week in power in December, voided an agreement with Iran to jointly investigate the AMIA bombing, calling it “unconstitutional.”

“A year ago the [AMIA bombing] prosecutor dies, a prosecutor that was trying to elucidate one of these attacks, and he prepared a very tough accusation about why we actually signed a memorandum of understanding with Iran that he believes was unconstitutional,” Macri said at the dinner.

Nisman was found dead hours before he was to present evidence to Argentine lawmakers that President Cristina Fernandez de Kirchner covered up Iran’s role in the AMIA Jewish center bombing, which left 85 dead and hundreds wounded.

The federal Criminal Appeals Court will hold a hearing Friday to decide which court should be given jurisdiction over the Nisman case. A political murder case must be handled by the federal courts.

On Wednesday, the WJC plenary assembly held a tribute to Nisman led by Rabbi Marcelo Polakoff, who shared the stage with Nisman’s mother, Sara Garfunkel; his ex-wife, Sandra Arroyo Salgado, and his daughter, Iara.

The assembly, which is being held this week for the first time in Latin America, is scheduled to end Thursday with the delegates attending a ceremony marking the 24th anniversary of the embassy attack.