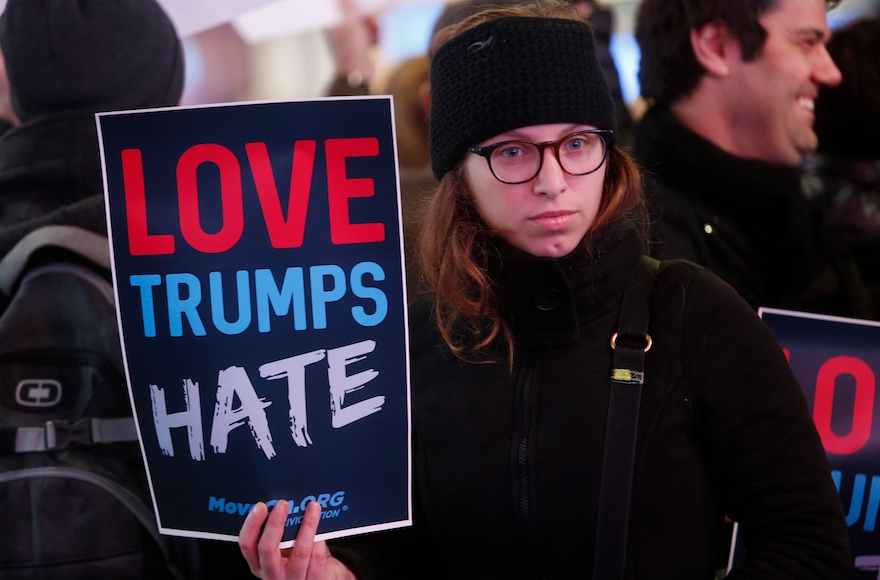 WASHINGTON (JTA) — A number of Jewish leaders are planning to protest Donald Trump’s campaign for the presidency when he speaks at the upcoming AIPAC conference.

Two rabbis, Rabbi David Paskin of Palm Beach Gardens, Florida, and Rabbi Jesse Olitzky of Congregation Beth El in Orange, New Jersey, have organized a protest they dubbed “Come Together Against Hate,” a play on the theme of this year’s America Israel Public Affairs Committee annual conference in Washington, D.C., “Come Together.”

The rabbis plan to have volunteers hand conference-goers stickers with the slogan as they enter the event, and to organize a two-pronged boycott of Trump’s speech. Some protesters will simply not attend, while others will walk out when Trump enters and convene at another spot in the Verizon Center, a sports arena where the conference is taking place, to study Torah passages against hate.

“We come together as Rabbis, Cantors, Jewish Professionals, and members of the Jewish community to repudiate the ugliness that Mr. Trump espouses,” the initiative said on its website.

Rabbi Jeffrey Salkin of Temple Solel, in Hollywood, Florida, also has been contacting fellow rabbis about a planned protest.

READ: David Duke: Trump-Hitler comparisons might be good for Hitler

“We have been urging rabbis to simply not attend the Trump speech and let our absence be felt and noted,” he wrote for a column on Religion News Service.

Some 40 rabbis have said they plan to demonstrate against Trump’s appearance at the Israel lobby’s conference, an organizer told The Washington Post.

The Reform movement, which has already vowed to “engage” with the Republican front-runner when he speaks, plans to announce protest measures Friday morning, two days before the launch of the conference.

The protesters are at pains not to fault AIPAC for inviting Trump, saying they understand the lobby must give equal time to each of the presidential candidates. Trump is to address the gathering Monday evening, a scheduling choice that led Fox News to cancel a GOP presidential debate on the same night.

“It is of paramount importance that our community develops a constructive relationship with whomever wins their respective party nomination and thus could be elected president,” an AIPAC official told JTA.

Trump, a real estate magnate, has targeted Muslims, Mexicans and others in his campaign rhetoric. He has been criticized, including by fellow Republicans, for wavering in his disavowal of white supremacists and for fueling hatred amongst his supporters, including toward Jews.