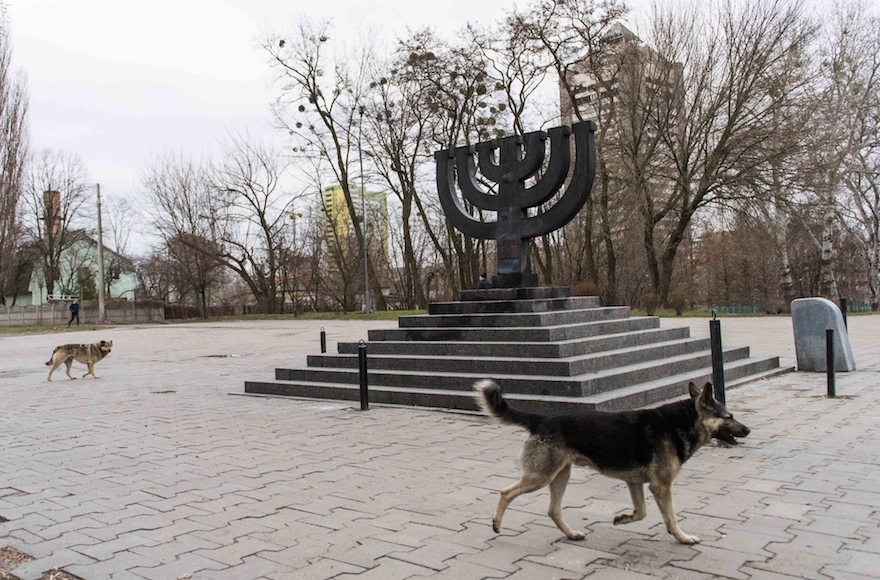 An 87-year-old Holocaust survivor, Proch lives near the Kiev ravine where Nazis and local collaborators murdered more than 50,000 Jews starting in September 1941. He has followed every twist of the 15-year saga to commemorate victims in a manner befitting the tragedy’s scale, which even by Nazi standards was extraordinarily barbaric.

Sensing the clergy and officials were part of the latest effort to memorialize the victims, Proch approached one of the rabbis, Yossi Azman, and asked him incredulously: “Do you really think we’ll finally get a proper monument?”

Proch has good reason to be skeptical. Since 2001, numerous Jewish groups and tycoons have attempted but failed to win municipal support to upgrade a notorious site where Jewish victims are memorialized only by an unfenced 6-foot menorah.

Built near a construction-waste dump roamed by homeless people and packs of stray dogs, the menorah is still charred from a recent torching – the sixth assault by vandals on the monument in the past year alone. Swastikas adorn two entrances to a metro station near the memorial park.

Yet with the 75th anniversary of the Babi Yar massacre approaching, authorities and community representatives say they are determined to build a new monument and avoid the pitfalls that thwarted previous attempts — including funding problems, concerns about building atop and desecrating human remains and internal feuding within Ukraine’s fractious Jewish community.

The new initiative to commemorate the Holocaust at Babi Yar began officially last month, when Prime Minister Arseniy Yatsenyuk convened a standing committee of officials and community representatives who meet every week. They aim to build a new monument by Sept. 29, the anniversary of the day in 1941 when Nazis began marching Kiev’s Jews to the ravine on the city’s outskirts and systematically massacring them with machine-gun fire. By some estimates, 100,000 Jews, Roma, communists and Soviet prisoners of war were murdered at Babi Yar, including over 33,000 Jews on those first two days alone.

The current memorial plan is an unambitious blueprint for two memorial paths that would connect the site of the menorah, situated on the park’s outer edges, to its center. One path will be dedicated to the Jewish victims, another for Ukrainians who risked their lives to save Jews.

The fate of the menorah, which Jewish groups placed here provisionally 25 years ago, is uncertain. One design, which is favored by the local municipality, features a stone wall integrated with replicas of personal artifacts such as spectacles, shoes and bags – echoing the piles of clothing taken from victims before they were shot. 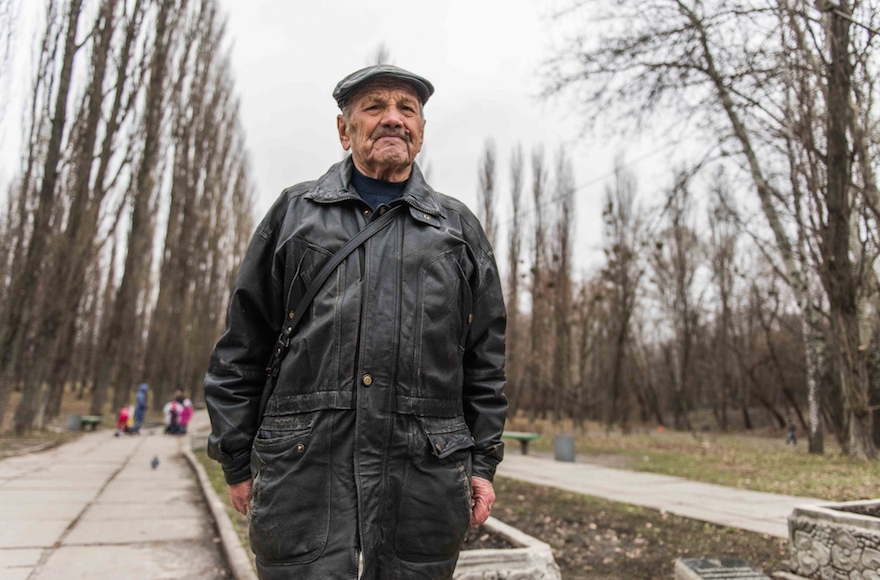 “It’s just dignified enough to pass as decent,” said Moshe Azman, an influential Chabad rabbi from Kiev and a claimant to the title of chief rabbi of Ukraine, about the new design.

“It’s not fancy, not huge, not spectacular – and that’s why it has a chance to succeed where previous plans failed,” added Azman, the father of Rabbi Yossi Azman. Moshe Azman has attended meetings of the standing committee.

Rabbi Dov Bleich, another chief rabbi of Ukraine, said: “Any sort of halfway decent monument is better than the current reality at Babi Yar, which is just a disgrace.”

The bare-bones design, estimated to cost a mere $150,000, reflects economic realities in Ukraine. The country has rampant unemployment, and its national currency, the hryvna, is now worth a third of its value against the dollar in 2014. That year, the Ukrainian economy crashed when the government was toppled in a revolution, which triggered a still-ongoing armed conflict with Russian-backed separatists.

Bleich said several plans failed because they were too ambitious.

“In the current reality, but even before in a poor country like Ukraine, a $30 million to $40 million project is often just not viable,” he said. “It’s just not going to happen, or will take a long time to.”

Babi Yar currently has three cornerstones that were placed here with great pomp over the past 15 years for Jewish commemorative projects that never materialized.

In 2001, the American Jewish Joint Distribution Committee, or JDC, proposed building a Jewish community center near the actual gravesite. Religious Jews thought it improper. Jewish community leaders, meanwhile, complained that locals, not JDC, should be handling the commemoration.

In 2006, businessman and Jewish activist Vadim Rabinovich began advancing plans for a museum atop land he had bought near, but not on, the gravesites. But that plan, too, was brought to a halt by critics like Meylakh Shoychet, Ukraine director for the Union of Councils for Jews in the Former Soviet Union. Shoychet and Vitaly Nachmanovich, the secretary of the Public Committee for Commemoration of the Victims of Babi Yar, argue that the construction would disturb human remains in violation of halachah, Jewish law.

In an email to JTA, Nachmanovich vowed continued opposition to Rabinovich’s attempts to revive the plan for a museum.

Fears of desecrating human remains are a common issue when dealing with Europe’s countless Jewish mass graves and cemeteries. The halachic complication is especially present at Babi Yar because of the nature of the executions there.

After the initial slaughter – the Nazis shot Jews who were lying down in layers on the bodies of their dead brethren – smaller groups of Jews were executed and buried here from 1941 to 1943. During that period, the Nazis had bodies exhumed and burned, and the ashes were scattered in a bid to hide their crimes, making it impossible to pinpoint all the graves at the sprawling Babi Yar Park.

“The whole place needs to be treated like a cemetery because that’s what it is,” Shoychet said.

Bleich and Azman favor the new design for this reason, too.

“It only entails placing tiles atop the ground, not digging in it,” Bleich said. “That defuses a lot of concerns.”

All the victims at Babi Yar are commemorated in a massive monument that authorities built in 1976 for all “Soviet citizens” killed there. But a monument recognizing Jews as specific victims of the Nazi genocide was only approved after the fall of the Soviet Union.

For Jews, Babi Yar is highly significant because it is the first massacre of its scale perpetrated during the Holocaust and the third or fourth largest overall. In a 2006 speech at the site, Meir Lau, a former chief Ashkenazi rabbi of Israel, described it as Adolf Hitler’s trial balloon for the final solution.

Had the international reaction to Babi Yar “been a serious one, a dramatic one, in September 1941 here in Ukraine,” Lau said, the fate of Europe’s Jews “would perhaps have come to a different end.”