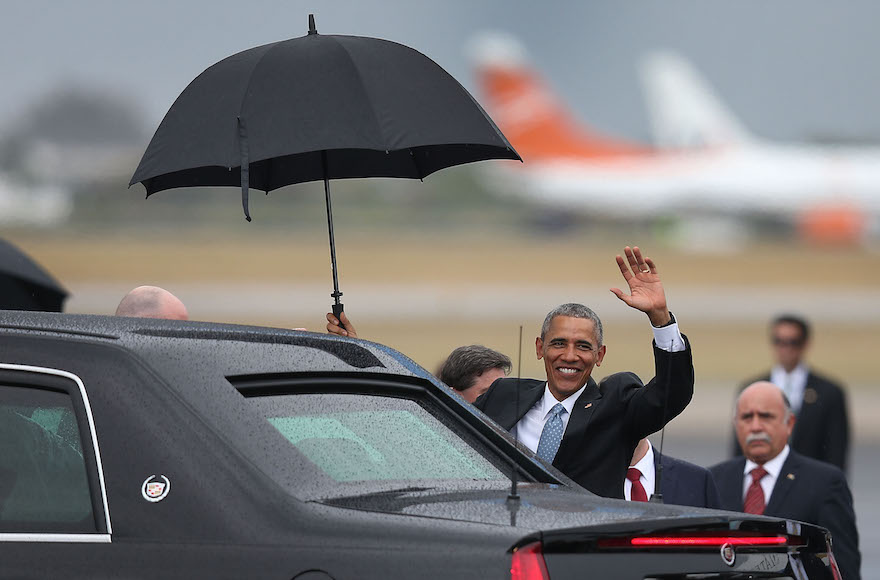 WASHINGTON (JTA) — In an emotional apology, the AIPAC leadership expressed regret to President Barack Obama for an attack on him from its stage by Donald Trump, and for the loud applause it earned.

“While we may have policy differences, we deeply respect the office of the President of the United States and our President Barack Obama,” Lillian Pinkus, the newly installed president of the American Israel Public Affairs Committee, said Tuesday, joined by other AIPAC lay and professional leaders.

AIPAC’s evident anguish in the aftermath of Trump’s remarks — delivered to its annual conference Monday night in Washington, D.C. — seem to reflect a divide among the 18,000 members in attendance. While many in the arena leapt to their feet in appreciation of the hard-line positions on Iran, terrorism and the current administration by the Republican presidential front-runner, others sat on their hands or even absented themselves from the event.

Launching a critique of Obama’s U.N. policy, Trump, a real estate magnate, started a sentence Monday evening, “With President Obama in his final year –“ Then he stopped himself and said “Yay!”

Cheers, laughter and applause arose from the crowd packed into the Verizon Center, a sports arena used by the lobby for the first time to accommodate record-breaking numbers.

“We take great offense at those that are levied against the president of the United States of America from our stage,” she said.

Trump’s candidacy has appalled a broad swath of the Jewish community because of his broadsides against Mexicans and Muslims, his insults directed at women and the disabled, and the violence at his rallies. AIPAC came under criticism in some quarters for inviting him to speak. The lobby countered that it had to invite the Republican front-runner. AIPAC leaders had called on Trump to deliver substance.

His speech included substantive content on how he would approach peacemaking and confronting Iran. But Trump could not resist departing from prepared remarks to deliver the red meat that has typified his boisterous remarks at rallies. In addition to his remark on Obama, his description of Hillary Clinton, the Democratic front-runner, as a “total disaster” also drew cheers, applause and laughter.

Rabbi Menachem Creditor, a progressive, told JTA that he adjusted his remarks at the confab Tuesday morning to address the fallout from Trump’s speech.

“We must not embrace the politics of hate,” Creditor said on stage after a video presentation on his career and pro-Israel activity immediately following Pinkus’ apology.

“AIPAC’s commitment to bipartisanship isn’t just about being mensches in the world,” he said. “The only way to keep Israel strong and to build a beloved community here in the United States is to regard the multiplicity of voices here and in our nation as sacred.”

Another moderate, Rabbi Rick Jacobs, president of the Union for Reform Judaism, issued a statement Monday night saying his group “was disappointed but not surprised that Mr. Trump did nothing tonight to allay our deep concerns about his campaign.” Ahead of Trump’s appearance, the group had criticized Trump for his “naked appeals to bigotry,” especially against Hispanics and Muslims.

“It still seems that he does not share our values of equality, pluralism and humility,” said Jacobs.