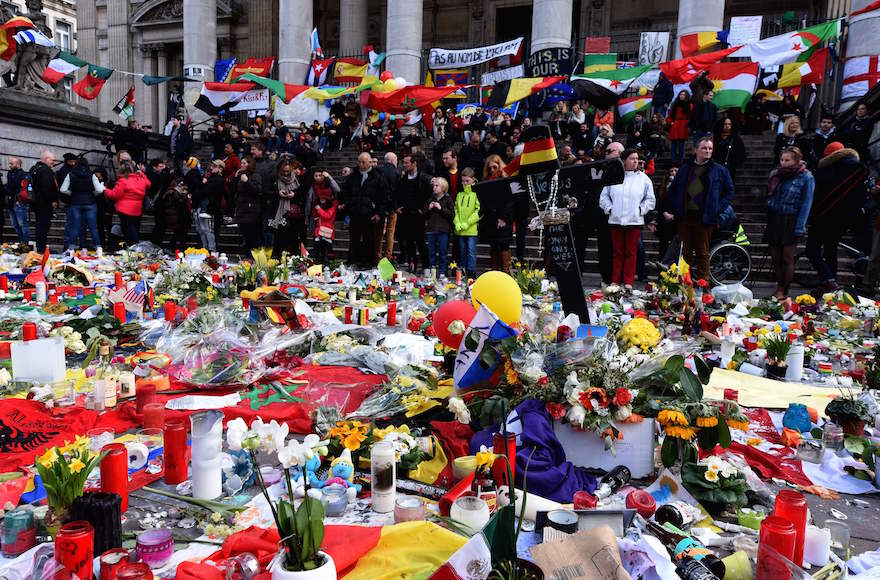 (JTA) –In the wake of last week’s terror attack in Brussels, Belgians transformed a central square in the capital into an impromptu memorial for the victims.
Thirty-five people died Tuesday in a series of suicide bombings at the city’s main airport and a subway station.Starting the next day, people gathered in Place de La Bourse and lit candles amid spontaneous singing and guitar playing of French-language songs about peace, along with some Beatles hits for good measure. Locals and foreigners filled part of the square with candles and flags from dozens of countries.

Amid the display of national and international unity, a few people went out of their way to exclude Israel. In at least three incidents captured on video last week, people speaking Arabic or wearing Muslim garb destroyed, removed or covered up Israeli flags at Place de la Bourse.

In an incident Sunday around noon, locals intervened. A crowd confronted a man who, after praying in Arabic, shouted “Palestine” and anti-Israel slogans — calling Israel a “terrorist state.” The incident was caught on video.

The white-haired man, wearing a head covering favored by North African Muslims, stepped on other flags and candles in an effort to reach an Israeli flag located near the center of the memorial site. Dozens of Belgians began booing him.

Several shouted in Flemish and French: “Shameful!” Others shouted in French: “Everyone!” in a call for others to join the booing.

When the man grabbed the Israeli flag, another man shoved him to the ground and wrestled it from his hands amid applause from onlookers. Two police officers made their way to the scene, and after a short exchange, escorted the shouting man away from the memorial. When the man again shouted in Arabic, one of the officers shoved him.

It was not the first time mourners at Place de La Bourse intervened to stop attempts to remove Israeli flags. In another incident after the bombing, two Arabic-speaking men who covered an Israeli flag with a Palestinian flag were confronted by a third man who was filmed saying in French: “This is an apolitical place, don’t do this.”

Gil Taieb, a vice president of the CRIF umbrella group of French Jewish communities, said that even bloodless insults against symbols must not be tolerated at a time when the West is grappling with killers who are waging a war of symbols.

“After each attack, we are shocked by the horror and cry for victims of all confessions,” he wrote in an Op-Ed published Sunday on the news website Le Monde Juif.info about the incidents at Place de la Bourse. “Each time, we hope and wait for a uniform line – the only rampart against barbarism.”

But anti-Israel actions like those in Brussels crack the unity Europe finds after terror attacks, he added, recalling the January 2015 slaying in Paris of 17 people at the Charlie Hebdo weekly, including several Jews and police officers, and the Hyper Cacher kosher market. Those attacks prompted millions to march under the banner “I am Charlie” and “I’m a police officer.”

Anti-Semitic anti-Zionists, Taieb wrote, “remind us they do not consider us to be like the rest, and that whether we are in Paris, Tunisia, Bamako, Brussels, whether we are Charlie or police officers, we will forever be but Jews and Israel to them.”

While disturbing to many, the drama around the Israeli flags pales in comparison to violence that broke out at Place de la Bourse on Sunday, when police dispersed a group of black-clad men who had mounted the steps of the stock exchange in the square and started chanting slogans against the Islamic State. Some members of the group were seen making Nazi salutes, confronting ethnic minorities and throwing flares.