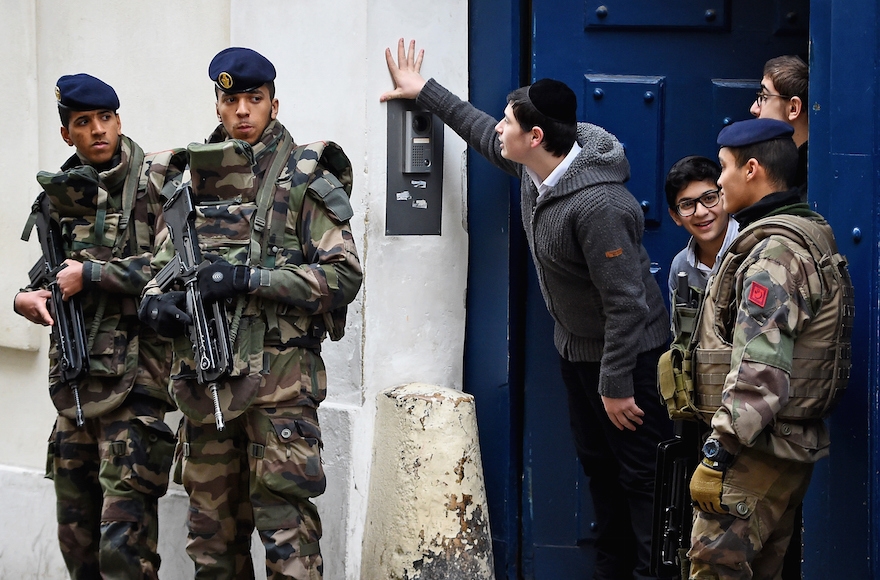 Children looking out from a doorway as armed soldiers patrol outside a school in the Jewish quarter of the Marais district of Paris, Jan. 13, 2015. (Jeff J Mitchell/Getty Images)
Advertisement

(JTA) — A Jewish man who stormed a suburban Paris synagogue dressed as a jihadist and shouting “God is great” in Arabic was not charged with any crime.

Police called the man, who is in his 40s, to a hearing on Friday, the day after he rushed into the Chabad synagogue in Vincennes wearing a djellaba – a loose-fitting Moroccan robe – and carrying toy Kalashnikov rifles, Le Figaro reported. The incident occurred on Purim, when it is traditional to dress in costume.

“I wanted to lighten the mood, I think I made ​​a big mistake,” he told another Paris-based paper. “Purim is a special party where you can let go and drink. I had an Arab costume with a red and white headscarf and a Kalashnikov. Arriving at the synagogue, I told the soldiers that it was a fake. I laughed with them. I shouted ‘Allahu Akbar,'” a phrase terrorists often use while committing attacks.

The appearance rattled the security guards at the synagogue, according to reports.

The incident occurred two days after suicide bombers affiliated with Islamic State killed at least 35 people in attacks at Brussels Airport and a metro station in the center of the Belgian capital, and nearly a week after three Israelis were killed in an attack in Istanbul after their travel group allegedly was targeted.