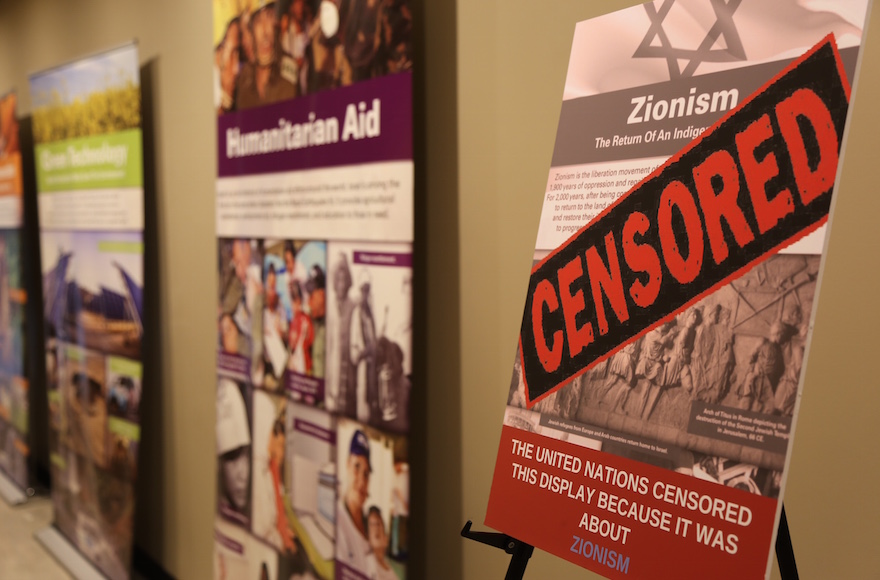 An Israeli exhibition being displayed at the United Nations headquarters, April 4, 2016. (Courtesy of StandWithUs)
Advertisement

NEW YORK (JTA) — A “miscommunication” led the United Nations to ban a display about Zionism from an Israeli exhibition at its headquarters in New York, a spokesman told JTA.

Hours after the exhibition opened Monday morning, an initially banned display panel about Zionism was added. But the U.N. stood firm in banning two other panels that Israel had proposed — one about Arab Israelis and another about Jerusalem. The panels are several-feet tall standing boards with images and texts.

“The panel on Zionism was not disallowed. There was a misunderstanding … and so it was initially communicated to the Mission that the panel could not be displayed. That was immediately revised and it was then clearly communicated to the Mission shortly after the first message that the panel could be displayed,” Stephane Dujarric, spokesman for the U.N. secretary general, wrote Monday afternoon in an email follow-up to a telephone conversation with JTA.

For his part, Danny Danon, Israel’s ambassador to the U.N., called the allowance of the Zionism panel a “clear win for Israeli diplomacy and a victory for the truth about Israel” in a press release Monday.

“This is a step in the right direction, but the UN must reverse its earlier decision entirely and allow the exhibit to be displayed without censoring the truth about Israel and Jerusalem – the eternal capital of the Jewish people,” he said.

The exhibit, created by Israel’s permanent mission to the U.N. along with Israel advocacy group StandWithUs, initially went up without three of the 13 proposed panels. In protest, organizers displayed a photograph of the Zionism panel with the word ‘Censored’ across it. The original full panel was later placed in the exhibition.

Dujarric said he could not explain the reasoning behind the ban of the other two panels in detail, but said the fact that the U.N. considers eastern Jerusalem occupied territory probably played a role in the decision on the Jerusalem panel. He promised to look into the matter further, but had yet to report back.

“As general rule, the aim is of these exhibits is to allow Member States to showcase cultural and/or social achievements, their history,” he said. “We try to make sure, among other things, that displays are in line with international legality (re panel on Status of Jerusalem). We also try to the best of our ability to keep these spaces free from polemics.”

The Israeli exhibition appears in an area of the U.N. headquarters that is not open to the public, and is mostly trafficked by delegates and staff, Dujarric said. Decisions about such exhibitions are made by the U.N.’s Department of Management in consultation with the Political Affairs Department and others, he said.

“This is not an exact science, as we’re dealing with understandable sensitivities. One must also keep in mind that we’re dealing with 193 member States, who all have to feel that this is their house. We regularly look at this process to see how it can best serve all the member States,” he said. The disapproval of parts of a country’s display “is not unprecedented.”

The Zionism panel speaks of “the liberation movement of the Jewish people, who sought to overcome 1,900 years of oppression and regain self-determination in their indigenous homeland.”

The Jerusalem panel describes the Jewish people as “indigenous to Israel” and states that “Jerusalem has been the center and focus of Jewish life and religion for more than three millennia and is holy to Christians and Muslims as well.” The panel on Israeli Arabs calls the group “the largest minority in Israel, making up 20 percent of Israel’s population.” Israel Arabs are “equal citizens under the law in Israel,” the panel says.