North of Paris, a beleaguered Jewish community dares to seder 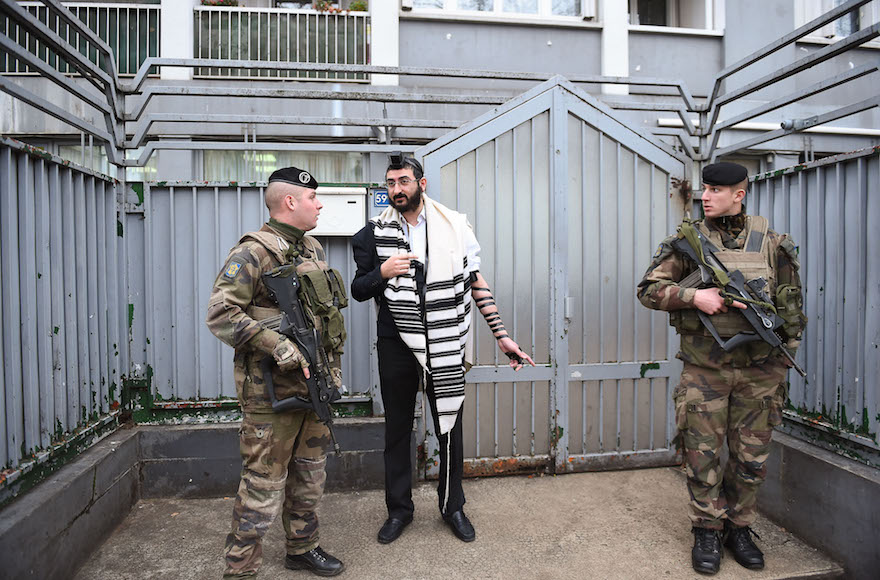 Soldiers guarding a staff member at a Chabad school in Paris, Nov. 16, 2015. (Israel Bardugo/Courtesy of the International Fellowship of Christians and Jews)
Advertisement

SAINT-DENIS, France (JTA) — After three firebombs hit the synagogue of this poor and heavily Muslim suburb of Paris, municipal authorities advised the local Jewish community to lower its profile.

Like dozens of attacks on French synagogues since 2000, the January 2009 incident at the Chabad House of Saint-Denis, which did not result in any injuries, was believed to have been Islamist extremists’ retaliation for Israel’s actions – that year against Hamas in Gaza.

“We were told by the mayor from the Communist Party that it would be prudent if we tone down our activities at least until things calm down in the Middle East,” recalled Yisroel Belinow, who runs the Chabad House here with his wife, Rivky, and his brother, Mendel.

“We had absolutely no intention of complying,” he said.

Instead of laying low, the Belinows that year produced Saint-Denis’ first public community Passover seder, starting an annual tradition. Members of this besieged congregation say it succeeded because it reflects their unity in the face of rising anti-Semitic violence.

Each year since 2009, the Beth Chabad of Saint-Denis — a small building under constant army protection — welcomes about 100 congregants for a group seder dinner. It is led by Belinow, an introverted and soft-spoken man, and his more outgoing and older brother.

“It’s the best answer we could come up with to the attack,” Belinow said. 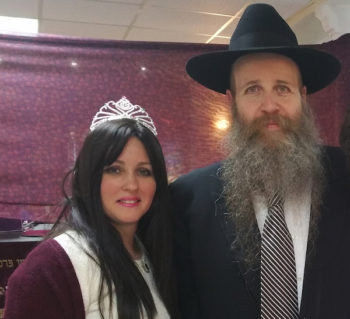 Rabbi Yisroel Belinow and his wife, Rivky, at the Chabad House of Saint-Denis near Paris, March 24, 2016. (Cnaan Liphshiz)

On the evening of Jan. 11, 2009, assailants ignited and hurled firebombs into the Chabad House kitchen. The fire charred the dining area but failed to catch because of a quick intervention by Mendel Belinow, who was inside the building. Belinow said police found 15 unignited firebombs in parts of the building, including a children’s play corner. No one was convicted in the attack.

“The attack lasted an instant and made an impression for a few weeks. But the seders — they’re now an annual event that’s part of the definition of this community,” Belinow told JTA during a community event last month in Saint-Denis.

Saint-Denis’ 15,000 Jews are all that remains of a community that was halved after the 1980s, when many left for more affluent and safer areas. Jewish emigration from Saint-Denis increased in 2000 amid a surge in anti-Semitic attacks. Gradually estranged from areas where it became unsafe to wear a kippah, the Jews here joined a quiet exodus that has depleted Jewish communities north of Paris.

With 100 guests, attendance at public seders in this drab suburb is relatively high for France. The Chabad House of Toulouse, where 23,000 Jews live, gets similar and even lower attendance, which sometimes leads to the event’s cancellation. And in Nice, where 20,000 Jews live, some 120 local Jews attend the local Chabad House’s public seder, which is being prepared for the fifth consecutive year.

Group seders are less popular in France than elsewhere in Europe because it has a predominantly Sephardic community with “close family ties and a tradition of hospitality,” said Avraham Weill, a Chabad emissary and chief rabbi of Toulouse. “People get invited to family seders, lowering demand for a public one.”

Some of the Saint-Denis seder guests are poor Jews with no family in France, including Mordechai Elbaz, a 60-year-old former dope dealer who lives in a moldy two-room apartment. He plans to attend the seder this year with his only relative – a sister, who is on a visit from Israel.

Other Saint-Denis congregants choose the public seder over a family setting. Caroline Wildbaum, 47, a regular at the Mendels’ Chabad House, has attended Saint-Denis seders with her four children, now aged 15 to 22, since the first year.

“I have a rather large family, so it’s not like I come here not to feel alone,” said Wildbaum, who lives in the nearby suburb of Sarcelles, a municipality known as “little Jerusalem” for its Jewish community of 60,000. “Having a seder here doesn’t subtract from the family atmosphere, it amplifies it.”

She added: “None of Sarcelles’ synagogues offer this feeling of unity and family.”

The Chabad House is now the only synagogue in Saint-Denis, which once boasted four. Drugs are sold openly at a local train station. Young, jobless gang members loiter there. In November, two suspected terrorists were killed here in a police raid on alleged perpetrators and accomplices tied to the terrorist attacks that month in Paris, which killed 130 people.

During the raid, the Jewish community of Saint-Denis went into lockdown for a few days. But true to his institution’s ethos, Mendel Belinow vowed activities would only “increase in volume,” starting with a public lighting of Hanukkah candles the following month.

At the Chabad House, congregants exchange hugs, kisses and back slaps. They call each other by their first names and address one another,  including the rabbis, with the less formal pronoun “tu.” Wildbaum sometimes teases the Brooklyn-born Rivky Belinow by calling her “my sister the princess” while playfully imitating her American accent.

Many credit the Belinows with generating this atmosphere.

“Mendel, with his fiery speeches and warm hugs, sets the tone,” said Ascher Bouaziz, a physician in his 60s who has worked his whole professional life in Saint-Denis. “Yisroel is more reserved. His administrational skills keep the place ticking. And Rivky, her charm and sweetness just melts everyone who meets her. That’s the secret to this place.”

Yet some connect the social cohesion also to the external threats, which are “making Jews seek comfort in a community where members have exceptionally strong ties to one another,” according to Irene Benhamou, a 59-year-old mother of two. “When you are surrounded by people who want to kill you, you find less time for bickering and formalities.”

Her youngest son was threatened with a knife on the street last year in what she said was an anti-Semitic incident. It made her decide to move four months ago to Noisy-le-Grand, an affluent eastern suburb, but she still comes to Saint-Denis for community events.

For Bouaziz, this year’s Saint-Denis seder may be his last. Next year he is planning to join the 20,000 French Jews who have immigrated to Israel since 2014.

“I don’t feel safe here,” he said. “When I retire I want to live where I can wear my kippah without inviting attack and army protection.”

But Yisroel Belinow wryly jokes about the security arrangements at his synagogue.

“At every seder, there’s one extra on top of the guest list,” he said of the prophet Elijah, for whom room is traditionally left at the seder table. “The only difference here is that we have Elijah plus four French Legion soldiers.”