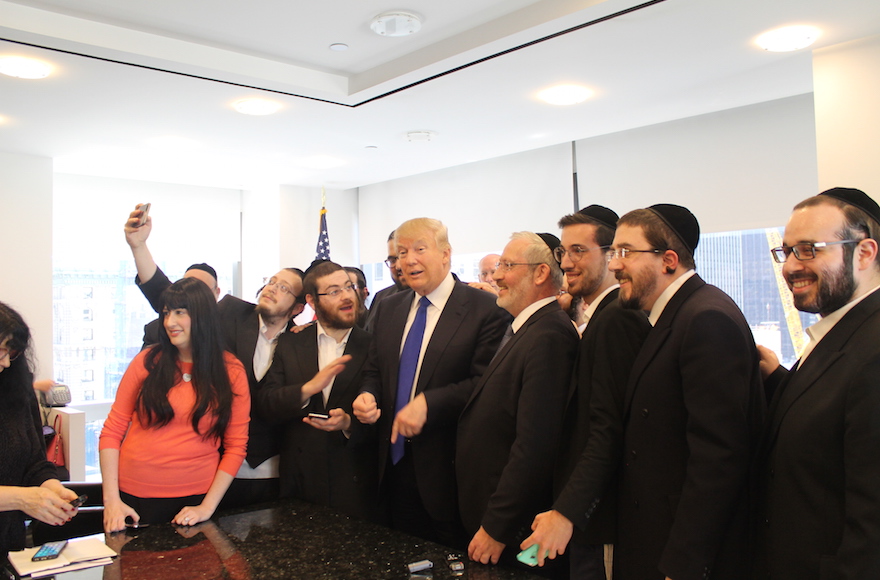 NEW YORK (JTA) – There were a few things Donald Trump made clear when he met Thursday with a select group of Jewish reporters, almost all of them Orthodox, at his corporate offices in Manhattan.

Fox News anchor Megyn Kelly was the one who initiated Wednesday’s one-on-one powwow with Trump to mend fences, not him. He’s a great friend of Israel. He has many Orthodox Jewish friends, including his chief lawyer, Jason D. Greenblatt. And he considers himself a very loyal boss.

But in a 20-minute question-and-answer session that touched on religious liberty in the workplace, U.S. foreign policy in the Middle East and federal education tax credits, Trump offered scant details.

On some substantive policy questions, the Republican front-runner for president didn’t answer at all, instead delegating the question to Greenblatt, a real estate attorney from Teaneck, New Jersey — one of two people he said he’d appoint as his White House Israel policy advisers.

Here’s Trump’s answer to a question on whether religious employers should have the right to discriminate on the basis of religion when it comes to hiring:

“That’s the question that’s been asked and discussed very brilliantly on many different levels over the last short period of time,” Trump said. “And I’m going to really leave that decision to you. That’s your personal decision. What would your answer be to that question?”

When asked about tax-exempt status for religious groups, Trump said, “It’s really become a very big point of discussion and a very complex point of discussion and it’s something that I’m very interested in and I’m really forming policy on it and I’m actually going to be announcing something that I actually think you’re going to be very happy with. OK?”

On a question about Jewish settlements in the West Bank, Trump turned to Greenblatt and said, “How do you feel about that, Jason, the settlements?”

Greenblatt: “I think the settlements should stay but I think they have to work something out so that both sides are able to live in peace and safety.”

There were some issues on which Trump offered a glimpse into what kind of presidency he’d run. He named two men he said would be his chief advisers on Israel: Greenblatt and another real estate lawyer, bankruptcy expert David M. Friedman of the Kasowitz law firm.

“I don’t think I can find better,” Trump said. “Jason’s very much a consultant to me on Israel, on everything. He’s a tremendously talented lawyer, one of the great real estate lawyers of the City of New York, and he has tremendous passion for Israel. When he goes on vacation, he goes to Israel.”

Trump did field some Israel questions himself. He said he supports a strong Israeli response to rocket attacks: “When missiles are being shot at a country, whether Israel or any other country, I don’t know what ‘disproportionate force’ is supposed to mean.”

He said he likes Israeli Prime Minister Benjamin Netanyahu, though he was disappointed by Netanyahu’s public rejection last December of Trump’s comments about barring Muslims from entering the United States. Trump clarified that it was he who canceled his planned visit to Israel last December, not Netanyahu.

In response to a question from JTA, Trump said the world would be much better off if Saddam Hussein of Iraq and Muamar Gadhafi of Libya had been left in power rather than ousted by U.S.-led attacks.

“We had Saddam Hussein, who was not a good man, but you would have been a lot better off if that wasn’t done, because now you’ve destabilized the entire Middle East,” Trump said.

“If our elected officials went to the beach and didn’t do anything, the Middle East would be a lot better right now,” he said. “It’s worse than it’s ever been. You look at the migration, you look at what’s going on in Europe, you look at all of the problems. So we don’t believe in authoritarian, but the fact is that if we would have done nothing with Iraq and Libya and other places, we would be better off.”

It was one of the few substantive policy responses during the meeting. Trump spent a chunk of time speaking – unsolicited — about his loyalty to his chief spokesman, Corey Lewandowski, who was charged with battery after an aggressive encounter with a reporter at a campaign event last month. Lewandowski interrupted to inform Trump that he had just learned that the case against him had been dropped.

“Oh, good,” Trump said. “Tell my friends from, in some cases Israel, how loyal was Mr. Trump to you, Corey? I’m proud of you Corey, you took it. It wasn’t easy.”

One of the first things Trump did when he sat down in the sunny corner conference room at Trump Tower and saw that almost all the 20 or so faces around the room were Orthodox Jews was summon some Orthodox Jews of his own to the room — including an executive vice president at The Trump Organization.

“The Orthodox community is amazing. I grew up in Brooklyn, as you know. Ocean Parkway. And I’ve had many, many friends over the years Orthodox, in fact people that work for me,” Trump said. “In fact, maybe I can get Jason Greenblatt down here. Jason is a person that has been so good, he’s a lawyer, he’s so incredible and he’s Orthodox.

“Will you do that Corey?” Trump said to his campaign spokesman. “And you know who else? David Cohen. That’ll be great. So they’ll come down for a couple minutes. Very talented people. Really great people.”

Trump also talked about his Jewish son-in-law, Jared Kushner, who helped write the pro-Israel speech Trump delivered last month to the American Israel Public Affairs Committee conference in Washington, D.C., Copies of the speech were handed out to all the participants before the meeting.

“You probably know, many of you, Jared Kushner, who’s my son-in-law, and he’s happily married to my daughter Ivanka,” Trump said. “So he sends his warmest regards, and she does.” 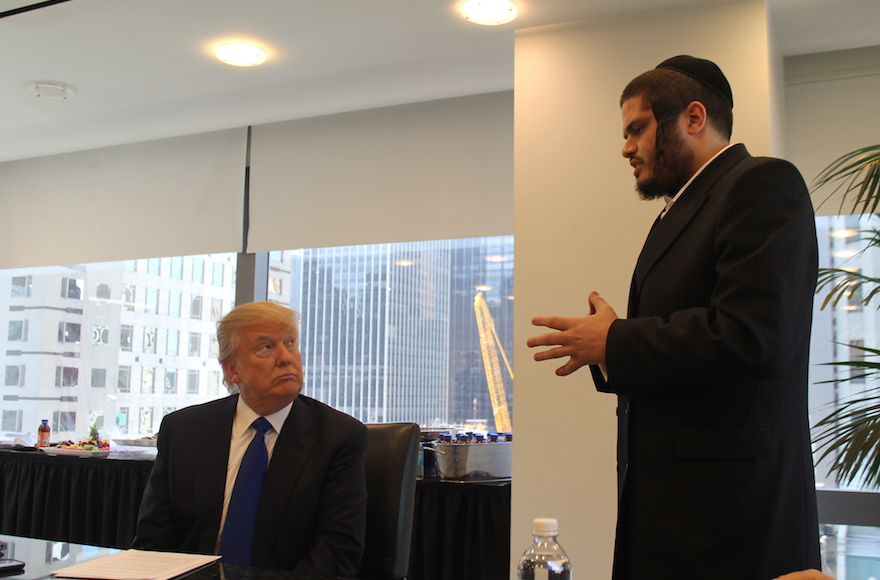 READ: At Jews for Bernie event, anger boils over at Sanders campaign

Trump showed some grace toward the two Democratic candidates for president, criticizing the New York Daily News after its bruising interview with Sen. Bernie Sanders, I-Vt., last week and noting at one point that former Secretary of State Hillary Clinton, too, expresses strong pro-Israel rhetoric.

“She’s been saying strongly in favor of Israel and so do I. The difference is I’ll produce, she’s not going to produce,” he said. “She’s not a trustworthy person. She’s going to be a third term of Obama.”

Trump was withering when it came to the Daily News.

“I’m no fan of Bernie Sanders, but I will say the Daily News did a big number on him,” Trump said. “But I have to tell you the Daily News is a very dishonest newspaper. They’re failing. They’ll be out of business very shortly. In fact, I hear they’re going online very soon.”

Trump talked briefly about his Jewish philanthropy, mentioning that his father used to buy Israel bonds, and wrapped up the meeting reiterating his befuddlement about why Jews are so supportive of President Barack Obama.

“In my opinion, Barack Obama has been tremendously disloyal to Israel, and yet my Jewish friends go out and have fundraisers for him all the time,” Trump said. “Someday you people will explain to me what you’re doing.”

LISTEN: Trump meets with the Jews