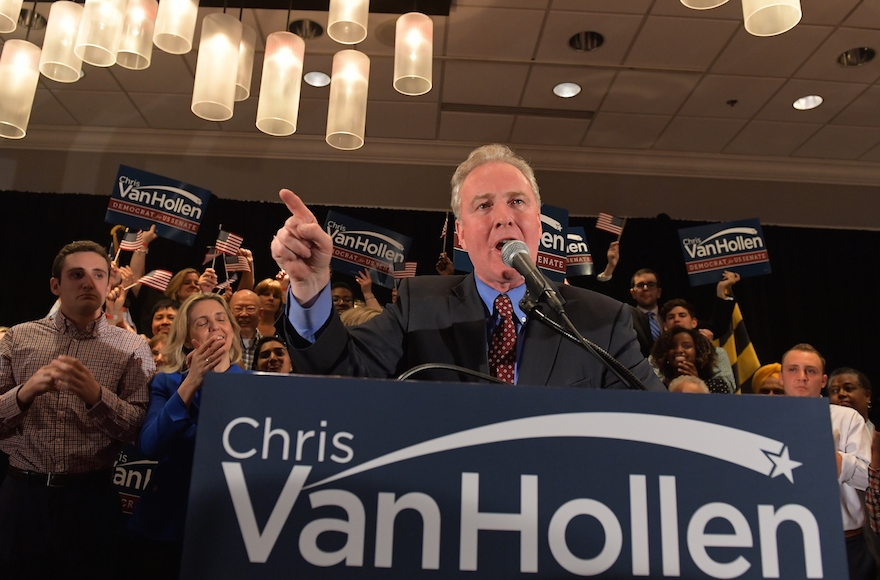 Rep. Chris Van Hollen won the party’s nomination for the Senate seat in Maryland being vacated by Sen. Barbara Mikulski, who is retiring, defeating Rep. Donna Edwards. Van Hollen is close to the pro-Israel establishment, while Edwards has been a sharp critic of some Israeli policies.

Van Hollen, the popular chairman of his party’s congressional reelection committee from 2007 to 2011, also played a role in 2014 in freeing from a Cuban prison Alan Gross, a State Department subcontractor who had been jailed for five years hooking up the island’s Jewish community to the Internet.

State Sen. Jamie Raskin, who is Jewish, was the winner in a field of nine candidates for the Democratic nomination to take Van Hollen’s seat. The district, comprising much of Montgomery County in suburban Washington, is solidly Democratic, and Raskin, backed by an array of progressive groups, is seen as a shoo-in for the next Congress.

Katie McGinty, a chief of staff for Pennsylvania Gov. Tom Wolf, beat Joe Sestak a former congressman, in the race to face incumbent Republican Sen. Pat Toomey. McGinty was the choice of Sen. Charles Schumer, D-N.Y., likely to become the next leader of his party in the Senate.

Democrats are still furious with Sestak for beating the late Sen. Arlen Specter in a 2010 primary. Specter, one of the few Jewish Republicans in Congress, switched parties the previous year to help pass President Barack Obama’s health reforms, and Democrats hoped to reward him with reelection.

Sestak went on to lose to Toomey, who used against Sestak his signing on to a letter criticizing Israel for its actions during the 2009 Gaza war.

Josh Shapiro won the Democratic nomination to be Pennsylvania’s attorney general, an office that has been plagued by charges of corruption in recent years. Shapiro, the chairman of the board of commissioners of Montgomery County, a suburban Philadelphia area, acted as an Obama surrogate to Jewish voters during the 2012 election, when he was a state representative.