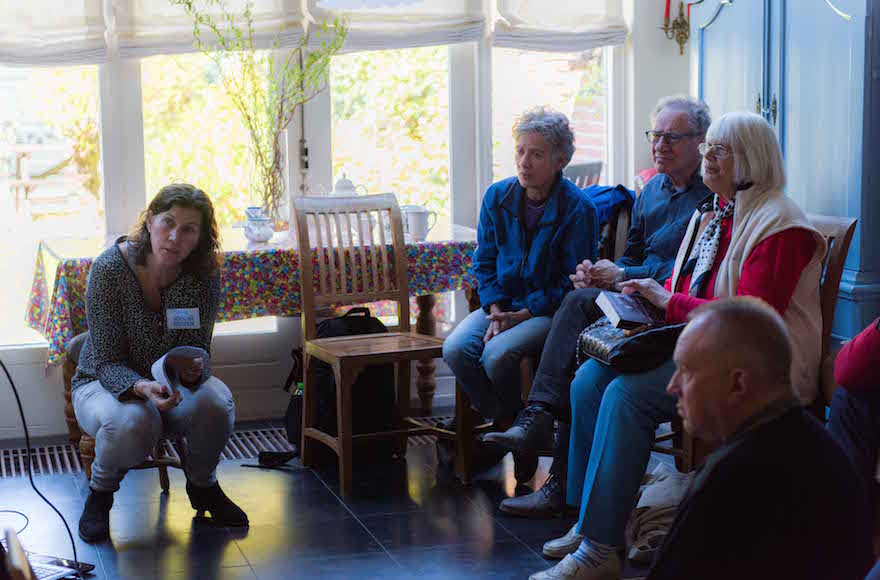 Yvonne van Gennep-Bouma, left, telling visitors about a Jewish family that once lived at what is now her home in the Hague, May 1, 2016. (Cnaan Liphshiz)
Advertisement

THE HAGUE, Netherlands (JTA) — After Yvonne van Gennep-Bouma discovered that Holocaust victims used to live in what is now her home, she began to think about them constantly.

At night, van Gennep-Bouma imagined the former occupants preparing to turn in. And in the morning, she wondered where they had their breakfast.

That was in 2012, she recalled, talking to a visitor in the manicured three-story townhouse in the Hague where she has lived with her husband and three children since 2001.

It was also in 2012 that van Gennep-Bouma, a nurse in her 50s, started to research the tragic story of Barend Koekoek, who lived here with his wife and son until they were evicted and murdered in the genocide.

In researching their story, van Gennep-Bouma said she relied on help from a historian who studied The Hague’s Jewish community. Koekoek, she learned, joined the Nazi-sponsored Jewish Council through his friendship with the controversial Friedrich Weinreb — a Jewish author accused and later imprisoned for taking money from other Jews he falsely promised to protect. After being deported to Theresienstadt, Koekoek insisted on boarding a death transport to Auschwitz with his ailing 5-year-old son, Henry Martin, to be with him. His wife, Goderta Frederika Koekoek-Micheels, perished in Auschwitz on Oct. 30, 1944, at 33.

Though she has to hold back tears while talking about certain parts of the story, van Gennep-Bouma said knowing Koekoek’s fate ultimately helped her find peace and learn to live with the Koekoeks’ memory.

“It brought closure and replaced the uncertainties with facts,” she explained.

In February, van Gennep-Bouma completed a two-year effort to have memorial cobblestones placed outside her home bearing the victims’ names. Now she doesn’t think about the Koekoeks as much as she once did.

Yet van Gennep-Bouma wanted to do more than merely know the story. On Sunday, she decided to share it by joining Open Jewish Houses, a unique grassroots project featuring dozens of property owners and renters of former Jewish homes. Each year on and ahead of Holland’s national memorial day for its World War II victims, they open their homes to strangers for lectures about the Jews who used to live there.

At a time when survivors are increasingly scarce, she said, “buildings can tell the story in a very powerful way,” she told JTA at her home on Sunday.

Taking place for the fifth consecutive year, the Open Jewish Houses project was born in 2011 out of a website, joodsmonument.nl, which lists the former addresses of 104,000 Dutch Jews murdered in the Holocaust. Having found his own address in the database, advertising copywriter Frits Rijksbaron urged other Amsterdam residents of former Jewish homes to place a “Jewish home” poster on their windows.

The action created a small community in Amsterdam, which in 2012 saw the first Open Jewish Houses event ever held in Europe. The following year, the project spread to five other cities and now encompasses dozens of homes in 16 municipalities, with 10,000 visits expected this year on May 4, the Netherlands’ day of Remembrance of the Dead (which this year happens to fall one day before Yom Hashoah, world Jewry’s day of Holocaust remembrance).

Denise Citroen, who coordinates the project for Amsterdam’s Jewish Historical Museum, attributes the project’s success to a number of coinciding factors that are specific to the Netherlands, including the fact that unlike in Austria, Hungary and Poland, “Jewish property issues were resolved vis-à-vis the Dutch government shortly after World War II, meaning very few homeowners have reasons to resist or fear the initiative.” Most Jewish victims, she added, were renting their residences.

In addition, information about Dutch Jewry was preserved thanks to meticulous archives.

And then there’s “a certain element of guilt,” she noted, for the murder of 70-75 percent of Dutch Jewry during the Holocaust – the highest death rate in Nazi-occupied Western Europe. And whereas this guilt would have prevented earlier generations from talking about the Holocaust in such an intimate setting, “younger  generations are sufficiently distant from the genocide to speak about it without triggering questions about personal complicity,” said Citroen, who is Jewish.

Hosts and guests often discuss the broader context of World War II over coffee or tea, after the host is done telling about the specific Holocaust victim who lived at that Open Jewish House. 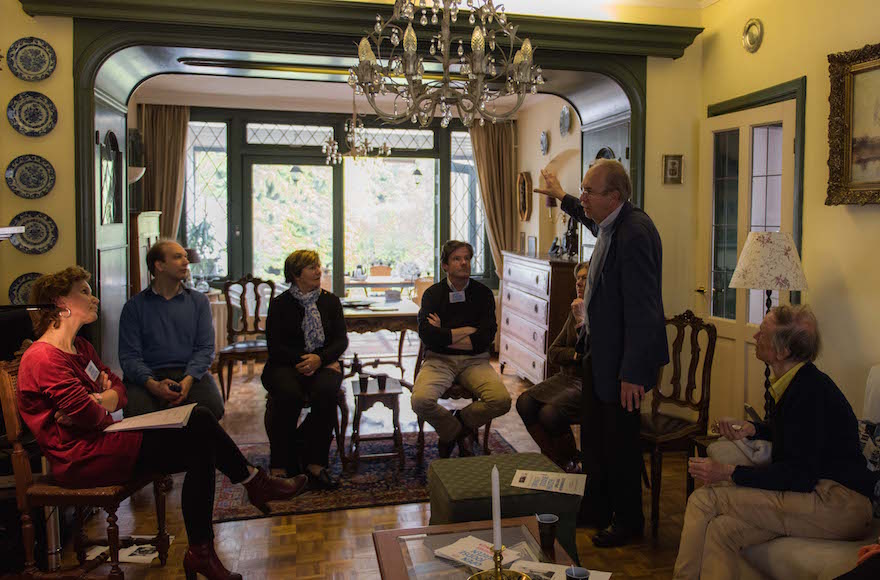 Kees van den Heuvel, standing, talking to guests about the Jewish family that once lived in what is now his home in the Netherlands town of Vught, April 30, 2016. (Cnaan Liphshiz)

In Vught, an eastern town that is infamous for the nearby concentration camp run by the Nazi SS, host Kees van den Heuvel remarked on Saturday that the story of the Frankenthals, Jewish refugees from Germany who lived in what is now his home, “is something very familiar to countless Syrians today.” He also said Dutch Prime Minister Mark Rutte should take in more Syrian refugees. Not everyone agreed.

Van den Heuvel and his wife, Bernadette, knew their house used to belong to Jews — a wine dealer and his brother, who were killed, and a dentist who avoided deportation thanks to his marriage to a non-Jewish woman – because they found “little signs,” he said. These included special tiles favored by Jews in the 1940s and a mural of a Jewish man. But Van den Heuvel learned the story from local volunteers working with Citroen to encourage participation in the Open Jewish Houses project.

“I now know this space right here used to be the waiting room for the dentist’s clinic,” he said at his home. “His clinic was upstairs. I can really see it before me.”

For the volunteers, “Googling and researching on Yad Vashem archives till 3 a.m. is very normal in the days leading up to May 4,” said Robert Herbschleb, a Jewish businessman from Vught who helped set up the town’s first Open Jewish Homes edition last year.

“You know you need to go to sleep, get ready for a day’s work,” he said, “but here’s this person, you only have three lines about them and it’s up to you to do for them the only thing you can do: Remember.”