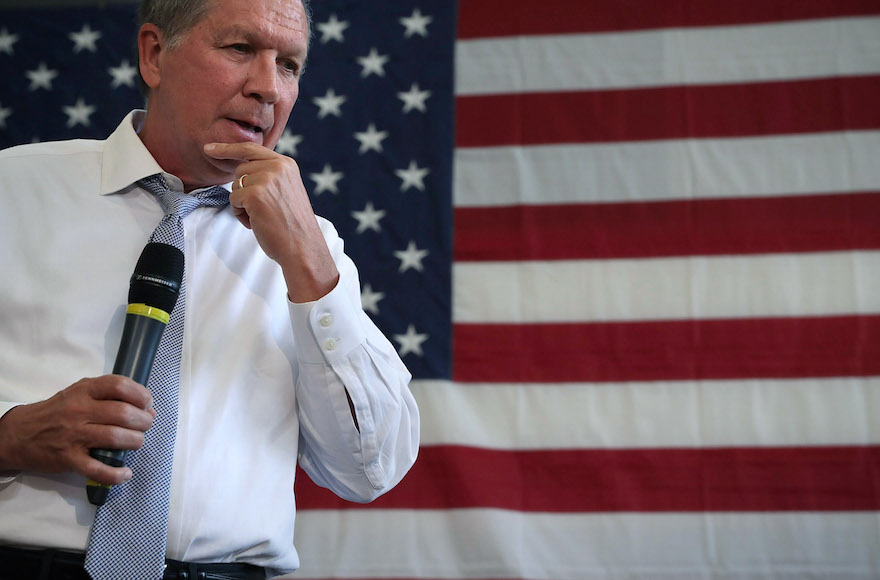 Trump, a real estate magnate who has been sweeping primary contests, was all but guaranteed the party nod Tuesday evening after his closest competitor, Texas Sen. Ted Cruz, dropped out of the race. Kasich lagged far behind in delegates and it was virtually impossible for him to catch up.

Kasich announced the end of his campaign on Wednesday evening in Ohio’s capital, Columbus. In an emotional speech, he thanked his family, his staff, and the Americans he met crisscrossing the country. “The Lord will show me the way forward and fulfill the purpose of my life,” he said.

Kasich, a longtime congressman before he became governor, has long-established ties to his state’s Jewish community and to the national pro-Israel community.

One of Kasich’s main Jewish backers in the state praised the governor’s run for its positive tone. “Gov. Kasich is a proven leader who has tremendous character and personal integrity,” Brad Kastan said. “Those attributes were clearly reflected in the way he conducted himself and throughout all levels of the Kasich Campaign.”

Hillary Clinton and Sen. Bernie Sanders, I-Vt., are still vying for the Democratic nod, although Clinton, a former secretary of state, appears to have a prohibitive lead in delegates.