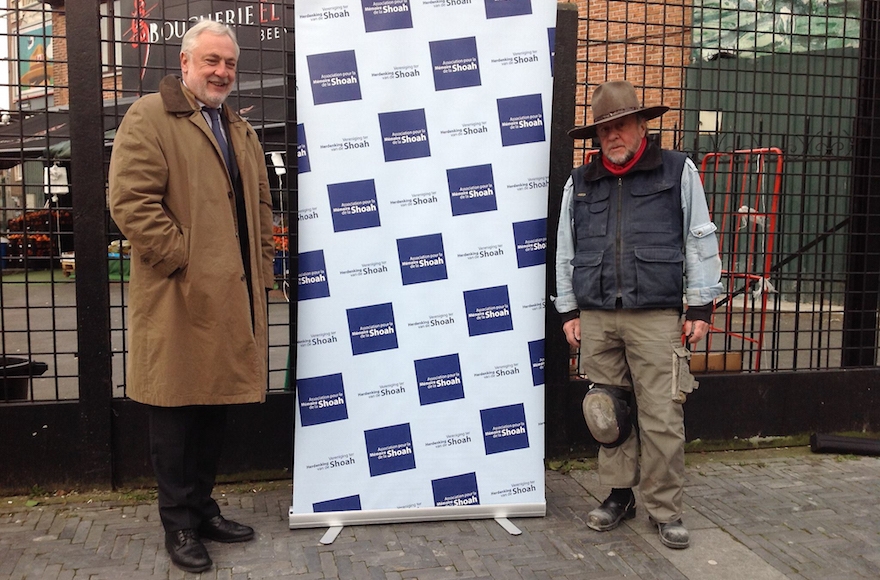 (JTA) — Jews from Brussels protested in Antwerp against the refusal of the Belgian capital and its Jewish community to use special cobblestones to commemorate Holocaust victims.

Highlighting the spreading of Belgium’s binational divide to its Jewish communities, a dozen protesters from the Brussels-based Association for the Memory of the Shoah picketed Monday outside Antwerp City Hall. The leaders of Antwerp’s Jewish community were attending a commemoration service with Mayor Bart de Wever at a monument elsewhere in the city at the time.

With backing from the local Jewish community, the city has refused to allow the placing of Stolpersteine — the German name for the small brass cobblestones set into the sidewalks in front of buildings from which Jews were deported. More than 50,000 of the cobblestones have been laid in 18 countries in Europe.

Brussels placed its first Stolpersteine last year after lobbying by AMS, a small but active organization that deals with Holocaust commemoration. But Antwerp Jews, who have increasingly sought their own representative bodies, have resisted an AMS initiative to bring the cobblestones to their city. They have cited concerns that the cobblestones could be vandalized in heavily Muslim areas or suffer the indignity of being relieved on by animals.

The Antwerp-based Forum of Jewish Organizations has argued that introducing Stolpersteine would be unfair to Holocaust victims who have no relatives to arrange the cobblestones for them. Instead, the Forum has favored erecting a monument with the names of all of Belgium’s Holocaust victims.

According to Michael Freilich, editor-in-chief of Antwerp’s Joods Actueel monthly, a history of intra-communal rancor could be playing a part in the Stolpersteine dispute. He told JTA Wednesday that while the Forum has put forth valid arguments for not placing cobblestones, its resistance “may in part also be a knee-jerk reaction to an idea coming from Brussels.”

Belgium, which is home to 40,000 Jews, is a binational federation made up of three regions: the Flemish Region, where a dialect of Dutch is spoken, the French-speaking Walloon Region and Brussels, where both languages are spoken. In recent years, Flemish secessionism has become a mainstream policy in the Flemish Region, splitting Belgium’s political establishment along national divisions.

This development led to divisions within the Jewish communities of both Brussels and Antwerp. The communities are of equal size but in addition to speaking different languages are characterized by different forms of Judaism. Antwerp is predominantly haredi Orthodox while Brussels Jews are mostly secular.

In the 1990s, Antwerp Jews pulled out of the Brussels-based Coordinating Committee of Belgian Jewish Organizations and set up their own umbrella group, the Forum. In recent years, the two groups have sparred over issues connected to Israel — as well as the CCBJO’s name, which suggests it represents all Belgian Jews — but have since restored understandings put in place to prevent clashes.

But Freilich noted that AMS was playing up ethnic divisions by suggesting the Flemish were more complicit in the Holocaust than the Walloons.

In a statement published Tuesday on its website, AMS wrote that Jews who moved from Antwerp to Brussels before the war “doubled their chance of surviving,” adding that the death rate of Jews in Antwerp “is almost as high as the one achieved by the Dutch government, with broad support by the Dutch population.”

About 75 percent of Jews in the Netherlands were killed in the Holocaust, compared to 60 percent in Belgium.