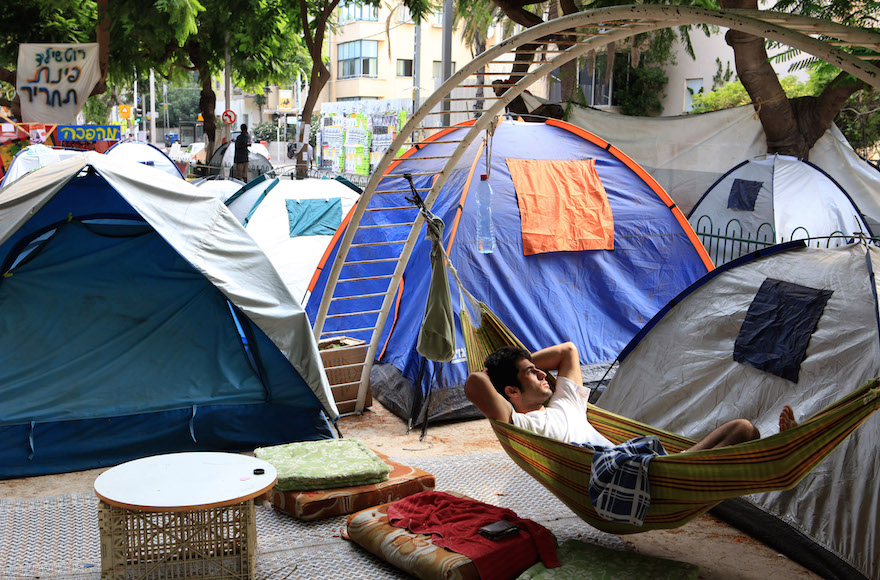 TEL AVIV (JTA) — On one hand, most Israelis say their financial situation is good and getting better. On the other hand, they’re worried they won’t be able to provide for their children.

On one hand, they want significantly more government spending in a wide range of public services. On the other hand, they say they pay too many taxes.

These are among the confused results of a wide-ranging economic survey obtained by JTA ahead of its publication Tuesday by the Israel Democracy Institute think tank. The survey results show widespread Israeli positivity when it comes to personal finances, disappointment in government and a desire for a broader welfare state on the Scandinavian model.

“These are people who, in the present, have a reasonable situation, but because of all of the change in the global arena, they’re very scared of the future,” said Tamar Hermann, the study’s lead author. “It’s not that someone is scared of the future because of his present situation. The situation isn’t totally bad; it’s pretty good. But we don’t know what will be in the future.”

Israel has had a relatively strong economy in recent years. The country joined the Organization for Economic Cooperation and Development, a group of wealthy nations, in 2010. Its unemployment rate is around 5 percent, and its per capita GDP has risen from $26,500 in 2010 to $34,300 in 2015. The economy is growing 3 percent annually, according to the Bank of Israel.

But at the same time, Israelis have become increasingly frustrated with their economy. The past two Israeli elections have seen centrist, bread-and-butter-focused parties gain significant followings. In 2011, half a million Israelis took to the streets as part of a summerlong protest over the high cost of living. Smaller demonstrations took place the following summer.

Study author Hermann said the protests stemmed, in part, from the debt Israelis feel the government owes them in return for their mandatory military service. Most Jewish-Israeli men serve three years in the army, while women serve two.

“People say, ‘I pay with my life, in years of my life,’” she said. “They say, ‘We pay taxes and serve in the army. The state should take care of us.’ The feeling is the state isn’t giving enough.”

Recent data, in some ways, depict an unequal economy. According to a report by Israel’s Taub Center for Social Policy Studies, Israelis spend more on consumer goods in comparison to the residents of other OECD countries — particularly food. Only three countries in the OECD have greater income inequality, defined by the group as the difference in income between the richest 10 percent and the poorest 10 percent. More than one-fifth of Israelis live under the poverty line.

Frustration amid prosperity has resulted, according to Tuesday’s survey, in contradictory attitudes. Despite the economic challenges, the majority of both Israel’s Jews (59 percent) and Arabs (58 percent) are happy with their financial situation. More than three-quarters of both populations believe their economic situation will improve in the coming years.

But at the same time, majorities of Jews and Arabs worry they won’t be able to provide for their children or save money for the future. More than a quarter say they have trouble making ends meet each month. Nearly a third of Jews and a majority of Arabs say they will probably be unemployed at some point before they retire.

“The work market has changed,” Hermann said. “You don’t have tenure [anymore]. In high-tech, from age 45 on, you’re obsolete. There’s an element of fear here. Maybe [difficulties] won’t happen, but the fear is it will happen. That’s not even to mention wars and things like that.”

Israeli Jews in particular, according to the survey, look to the government to better their lives. Nearly 60 percent of Jews prefer a “Scandinavian model” economy, with high taxes and a robust welfare state, over an “American model” with lower taxes and fewer government services. Nearly half of Jews (45 percent) say they want more government involvement in the economy.

Majorities of all Israelis also want the government to spend more on the following sectors: health, police, education, academia, transit, welfare and housing.

READ: Beyond Iran and Gaza, Israel has socioeconomic worries, too

But most Jews are critical of their government, according to the survey. Almost 62 percent say their tax burden is unfair. Most rate Israel’s civil service “poor” or “very poor” when it came to areas like efficiency, transparency and quality of service. And most say government improves when experts from the private sector join the civil service.

“Israelis are unlike some in the U.S. that consider the government part of the problem,” said IDI President Yohanan Plesner. “In Israel, people have very high expectations of the government to be involved and take responsibility. It means there’s a much greater need to ensure the government is effective in the provision of services.”

Israeli Arabs, on the other hand, report higher levels of satisfaction with the government than do Jews, but a majority (63 percent) prefer the low-taxes, fewer-services American model of government. Only about a quarter want more government involvement in the economy.

Plesner said Arabs may prefer fewer government services because, unlike Jews, they feel the government discriminates against them and is not built to serve their needs.

“There is perhaps less trust that if the government has a major role, that [Arabs] as a minority would benefit from it,” Plesner said. “Jewish Israelis have low trust, but high expectations.”