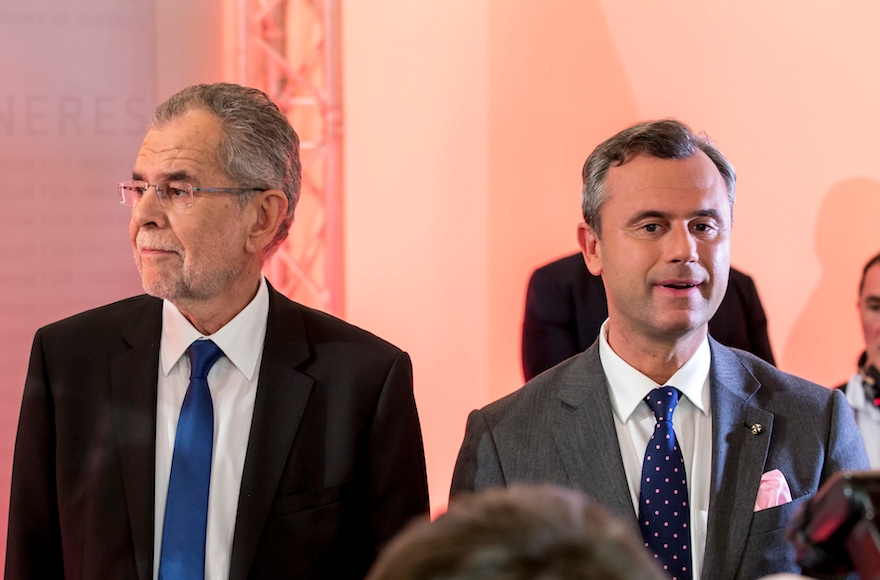 (JTA) – European Jewish groups reacted with relief to the victory by a left-wing politician over a far-right candidate in Austria’s presidential elections.

Alexander van der Bellen, an environmentalist with a pro-refugee agenda, won with 50.3 percent of the vote on Sunday, despite early reports predicting victory for Norbert Hofer of the Austrian Freedom Party party, or FPO, in the runoff, the BBC reported. Hofer had 49.7 percent of the vote.

“While we are certainly satisfied with the result, there is little room to celebrate the high level of support for someone with such extremist views as Norbert Hofer,” European Jewish Congress President Moshe Kantor said in a statement Monday. “Unfortunately, the dissatisfaction with the moderate mainstream parties is providing oxygen to those like Hofer” and the Austrian Freedom Party.

“We are seeing signs of these trends across Europe, so it is incumbent on the more centrist parties to use this as a wake-up call and listen to the grievances of the people,” he said.

The Jewish Community of Vienna has shunned the Freedom Party, which it regards as having problematic ties to neo-Nazis. Party Chairman Heinz-Christian Strache has denied the allegations and recently visited Israel, where he met with Likud arty officials. In 2012, Strache apologized for posting on Facebook a caricature depicting an obese, hook-nosed banker wearing star-shaped cufflinks.

Striking a more optimistic note, Rabbi Pinchas Goldschmidt, the president of the Conference of European Rabbis, said the result is “a clear sign that Europe is beginning to realize that hate and fear politics are not the answer to the many challenges we are facing as a continent.”

The Freedom Party has campaigned hard against the admittance of migrants from the Middle East, including refugees, citing their religion, Islam, which the party says is irreconcilable with European values. Austria has taken in 100,000 migrants from the Middle East over the past year — action that commentators say has generated a backlash of discontent that is helping the far right.

Oskar Deutsch, president of the Jewish Community in Vienna, told JTA: “I am very happy that van der Bellen won the election. He happens to be a good friend for many years to the  Jewish community and a very good friend of the State of Israel.” He also said he is “happy the other candidate didn’t win.” Many Austrians voted for Hofer out of protest against the government and “not because they are sympathetic to the FPO,” Deutsch said.