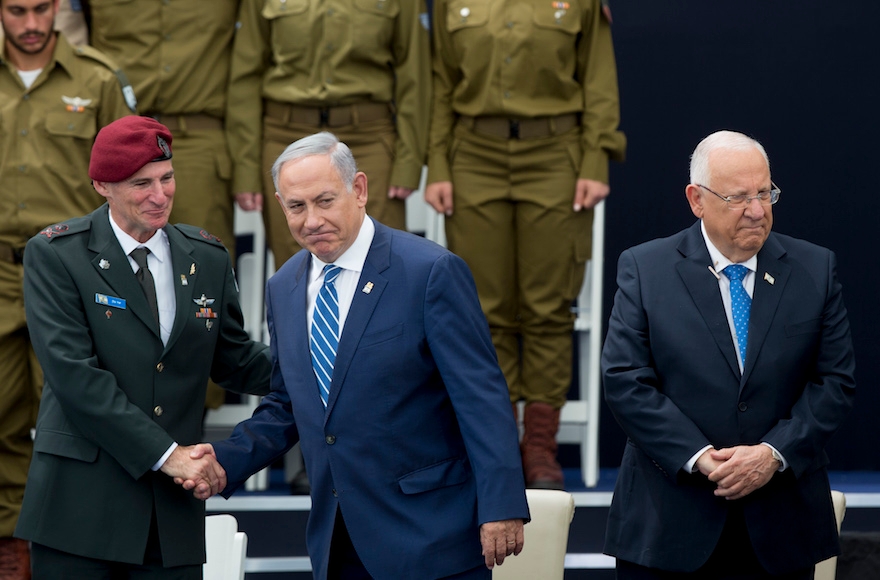 (JTA) — Israeli Prime Minister Benjamin Netanyahu said he supports the establishment of a Palestinian state as long as it is demilitarized and recognizes Israel as a Jewish state.

In a speech to the Knesset Monday, Netanyahu said he is prepared to take “brave steps” to achieve peace with the Palestinians, despite his skepticism about France’s upcoming summit aimed at restarting peace talks, The Associated Press reported.

Earlier in the day, Netanyhau told French Prime Minister Manuel Valls, who is visiting Israel and the West Bank to drum up support for his peace initiative, that direct negotiations are the only way to achieve peace. The Palestinians, unlike Israel, have voiced support for France’s conference.

According to the AP, Netanyahu said he would accept a French initiative that brought him and Palestinian Authority President Mahmoud Abbas together in a room alone to discuss the conflict’s most difficult issues.

During his Knesset speech, Netanyahu did not specify what brave steps he is prepared to take. At the same Knesset session, opposition leader and Zionist Union chief Isaac Herzog accused Netanyahu of “slamming the door” to peace and becoming a “hostage” to political extremists.

Last week, following weeks of reports that Netanyahu was negotiating with the Zionist Union to create a national unity government, the prime minister surprised many when he invited the right-wing Yisrael Beiteinu party into his governing coalition, appointing former Foreign Minister Avigdor Liberman as defense minister. Last week the right-wing Jewish Home party approvingly described the new coalition as Israel’s “most right-wing government ever.”