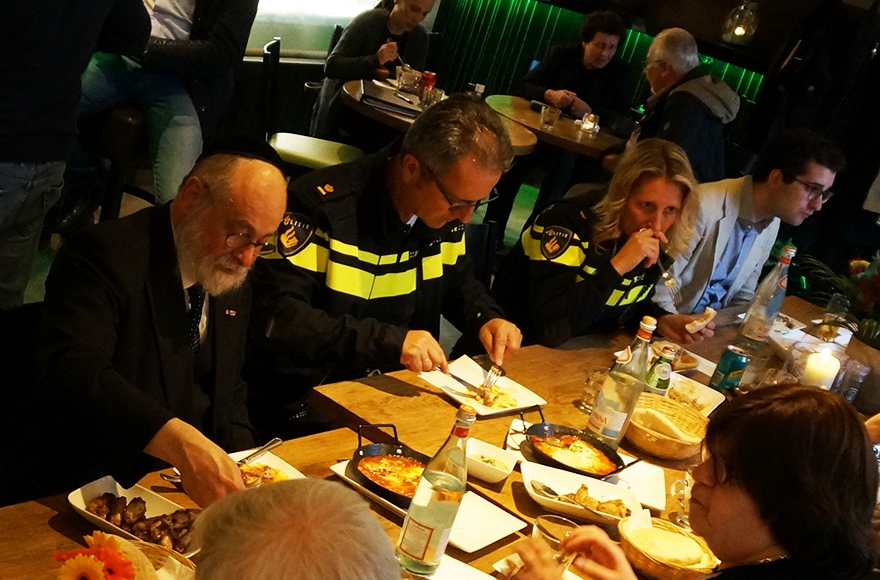 AMSTERDAM (JTA) — The stabbing of a woman at a kosher restaurant here was not a hate crime, police said.

The attack Monday night at Grand Cafe Rimon, which resulted in moderate injuries to the victim and ended with the arrest of the suspected assailant, was the act of a person who appeared mentally unstable, a spokesman for the police told JTA Tuesday.

Security camera footage shows the man, a Brazilian national who was not named by police, sitting at the restaurant in the southern part of the city, exiting and returning shortly thereafter, the spokesman told JTA. He then stabbed the woman and sat back down at the table, urging staff to call an ambulance. He told police during questioning that voices in his head told him to stab the woman. He had bought the knife at a nearby supermarket.

The victim, Victoria Warenholt, wrote on Facebook Wednesday that initial reports in Dutch media that she was stabbed in her arm were inaccurate, and that in fact the knife punctured one of her lungs.

“I was having dinner with a dear friend when suddenly I felt a punch in my back and I saw the man trying to stab my friend in her face. My friend was not hurt, but unfortunately the knife punctured my lung on the right side,” she wrote, adding that she was in pain but recovering. She neither knew the attacker nor spoke to him, she wrote.

“He appeared completely deranged and it’s not clear whether he even knew he was at a kosher, Israeli restaurant,” the police spokesman said. “This does not appear to be an anti-Semitic incident, though in the current atmosphere we had, of course, immediately suspected that it was.”

On Tuesday, prominent figures from the Dutch Jewish community, including Dutch Chief Rabbi Binyomin Jacobs and Israel’s ambassador to the Netherlands, Haim Divon, gathered at Grand Cafe Rimon to show their support for the establishment and community in Buitenveldert, a heavily Jewish neighborhood of Amsterdam. Dozens of patrons filled the restaurant to capacity.

Among the guests present was David Bezemer, former chairman of Maccabi Netherlands, and Rabbi Yanki Jacobs, director of Chabad Amsterdam, as well as Ronny Naftaniel, Chairman of Dutch Jewish Humanitarian Fund and former head of the CIDI watchdog on anti-Semitism.

The owner of Grand Cafe Rimon feared the restaurant would be empty Tuesday as word about the stabbing spread, Divon, the Israeli ambassador, said. “So community leaders stepped in to make sure the owners suffer no losses.”

Jacobs, the chief rabbi, said: “In Israel and in the Netherlands, we do not stand down to threats, be they by terrorists, criminals or others. We carry on with our lives as Jews. And that’s what we’re doing here.”

Grand Cafe Rimon has intermittently come under the protection of the Jewish community security volunteers amid fears of attack.

Last year, a Jihadist killed four people at a kosher supermarket in Paris.