Israel is now the land of milk and whiskey 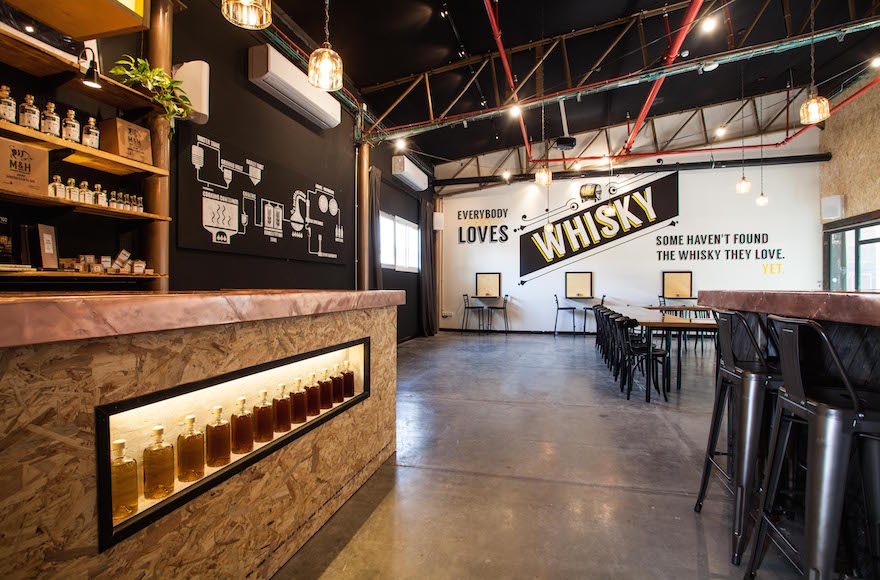 KATZRIN, Israel (JTA) — David Zibell is busy testing the alcohol level of the liquid flowing out of his outdoor copper still. Then, touching his head to ensure his kippah is in place, he heads inside to carefully place labels on the whiskey bottles lined up inside his distillery.

The small warehouse in an industrial zone in the Golan Heights town of Katzrin may not look like much from the outside, where his makeshift whiskey still is essentially a large metal pot connected to a blue plastic garbage pail. But Zibell — a bearded, bespectacled France-born Canadian who made aliyah in 2014 — is the first person to bottle and sell whiskey in Israel, where it hit the market earlier this month.

The Jewish state may be known for many things, but whiskey isn’t one of them. Until recently, Israel-made alcohol was basically confined to the likes of Goldstar and Maccabee — beer that few Israelis are proud of — and arak, a potent, clear liquor that even Israelis admit is a bit of an acquired taste.

Over the past decade, however, Israel’s alcohol industry has blossomed. It now boasts award-winning wineries that have become world-renowned, and Israeli micro-breweries have proven their prowess as well.

Now, with a total of three distilleries that have opened in Israel over the past four years, it may be whiskey’s turn.

“Whiskey was always my passion, but now there’s a bigger demand for it,” said Zibell, founder of Golan Heights Distillery. “Whiskey sales in Israel went up 45 percent in the last three years. This happened elsewhere years ago, but here things take a little longer.” 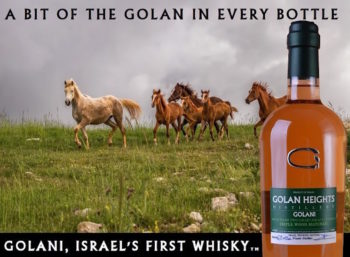 This new crop of Israeli whiskey-makers are capitalizing upon the spirit’s rising popularity around the world, said Jonathan Ishai, the founder of the Israeli Whisky Society. When Ishai founded his group back in 2003, he said he had few comrades. But today the group boasts 5,000 members who gather at whiskey tasting events, lectures and occasional trips to Scotland.

For now, the whiskey scene in Israel is a fledgling one, with all three distillers in a bit of a friendly competition to lay claim to the country’s “firsts” when it comes to this particularly evocative — and fetishized — spirit.

Pelter, a well-known winery in the northern Golan Heights, was the first operation in Israel to begin distilling whiskey in November 2013.

Inspired by other boutique wineries that have edged into the whiskey-distilling biz, Pelter’s founder Tal Pelter found himself buying a still from Cognac, France, that was once used by Remy Martin. “There was zero production in Israel so it was like diving into a deep blue ocean,” said Pelter, whose grandfather hawked homemade whiskey in the U.S. during Prohibition.

Milk & Honey was the first to build a whiskey distillery in Israel. They began construction on their 10,000-square-foot facility in Jaffa in June 2014 and started distilling in March 2015. Last month they opened a sleek visitor’s center, which offers tours, tastings and private events. With its poured-concrete floors and shared wooden tables, its industrial-chic atmosphere could easily be mistaken for something in Brooklyn.

“Six whiskey-loving friends decided they wanted to turn a dream into a reality,” said Eitan Attir, Milk & Honey’s new CEO. “Most of them are from hi-tech and have startups, and this is a bit like a startup.”

Meanwhile, the Golan Heights Distillery is a tiny, one-man operation. Zibell — a 36-year-old who was born in Paris and raised in Montreal — is founder, CEO and master distiller, as well as sole investor. His love of whiskey and his dream of making his own began innocently, inspired by many “l’chaims” at Shulounge, the Montreal synagogue where he drank whiskey with friends after Shabbat services every Saturday. 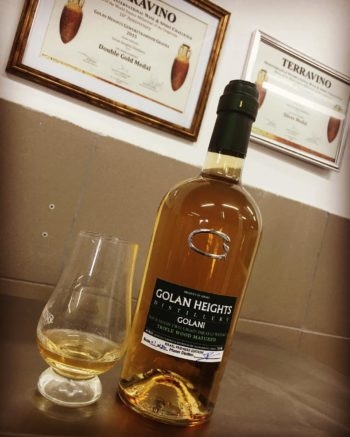 When Zibell moved to Israel with his wife and three of his six children, he intended to continue working in real estate but make whiskey as a hobby. He found romance in the idea of distilling in the picturesque Golan Heights, near his Katzrin home. Once Zibell bought a still,“I started distilling and haven’t stopped,” he said.

That Zibell succeeded in being first to market hinges on a technicality: There are no whiskey regulations in Israel, as there are in Scotland or the United States. In Scotland, the birthplace of whiskey (or whisky, as it is known there), laws mandate, among other things, that whiskey age a minimum of three years in oak barrels. In the U.S., federal law regulates the percentage of grains and alcohol in labeling various spirits. So while Zibell’s spirit may be considered whiskey in Israel, it wouldn’t necessarily be labeled as such elsewhere. (A previous attempt to distill whiskey in Israel, in the 1970s, failed when the Scotch Whisky Association successfully sued the makers of the Israeli brand, Ascot, for calling its  product “Scotch.”)

By contrast, Pelter and Milk & Honey are following the Scotch regulations. As their whiskey ages, both distilleries are producing and selling a variety of other tasty spirits. Milk & Honey is selling “new make” — a potent alcohol produced during the distillation process. (Aging in oak barrels is what gives whiskey its color and up to 70 percent of its flavor.) They’re also hawking “Levantine gin,” which featured spices from Tel Aviv’s Levinski market. Pelter’s non-wine offerings include gin, arak and mahjoul, a date brandy.

Fortunately for Zibell and his young spirit, whiskey matures much faster and more intensely in Israel due to the hot and humid climate, according to Ishai.

In September last year, after aging his two-grain sour-mash whiskey for one year, Zibell began selling a limited run at select stores in Jerusalem in order to test the response to such a young whiskey. The feedback was favorable and Zibell formally launched on Israeli Independence Day on May 12.

Calling his spirit “Golani Whiskey” — both for its geographic origin as well as the IDF infantry brigade whose logo inspired the bottle’s green label — Zibell is releasing 100 bottles each week of the 900-bottle run. An additional 600 bottles will soon be available in the U.S. through kosher wine distributor The River. Milk & Honey and Golan Heights and both kosher certified.

“People are eager to see an Israeli whiskey,” says Zibell. “I’m going to keep it as a young whiskey, because the Israeli personality is all about not wanting to wait for things.” 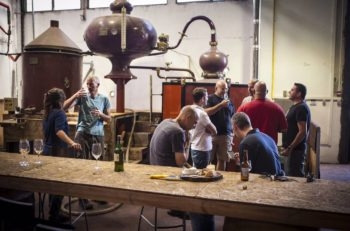 Pelter Winery also distills whiskey and other spirits. The still in the background is from Cognac, France, and once was used by Remy Martin. (Courtesy of Pelter Winery)

For those with patience, Zibell is also distilling single malt, rye and corn-mash whiskeys, all of which he plans to release between late 2017 and mid-2018. Golan Heights Distillery is producing other spirits as well, including an absinthe inspired by his great-grandmother, who owned an absinthe bar in France.

If further proof — pun intended — of Israel’s whiskey bonafides is needed, in June, Whisky Live, “the world’s premier whisky tasting show,” will come to Tel Aviv for its third year. And this year, for the first time, visitors will be able to sample locally made whiskeys.

Unlike Israel’s blossoming craft-beer and wine industries, home-grown whiskey has taken longer to catch on partly because high-end spirits were once too expensive for the average Israeli. That changed in June 2013, when former Finance Minister Yair Lapid issued controversial tax reforms. Though the new taxes were bad news for fans of cheap arak — bottles that once cost as little as $5 now start at $15 — they were celebrated by Israeli whiskey lovers, who could now pay $40 for a bottle of 12-year-old Glenlivet that previously cost $70.

And as Israelis’ palette grows more accustomed to this high-end spirit, the pioneers of Israel’s whiskey industry expect more of their fellow countrymen to join them in opening distilleries.

“If 30 years ago I told you Israel would have great wines, you’d have laughed at me, but today there are so many great Israeli wines,” said Ishai. “Whiskey will take a little longer, but it will get there, too.”