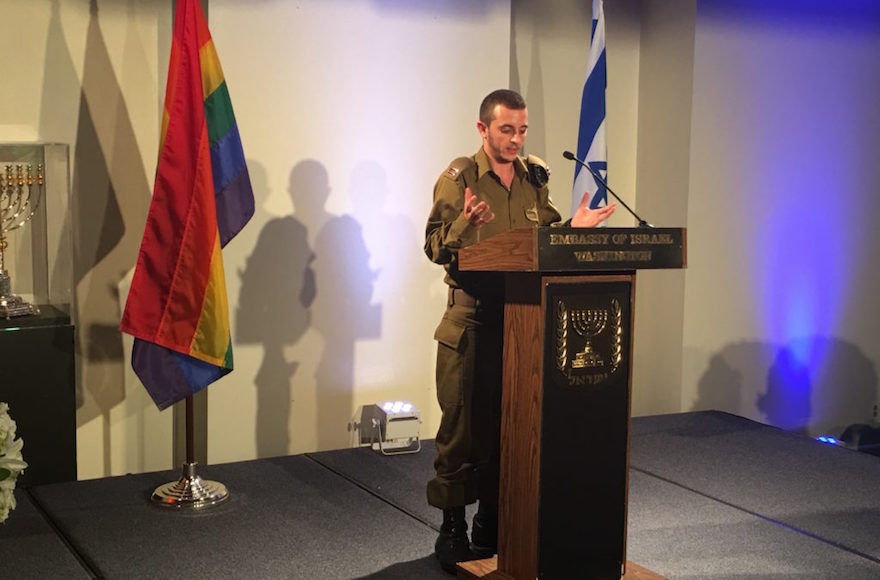 WASHINGTON (JTA) – When Shachar was 2 years old, she asked her parents to keep her hair short. When she was 5, she asked them to throw out every skirt in her closet.

When Shachar was 16, he realized he was a boy, and when he was 19 he got the army, Israel’s most daunting bureaucracy, to add a pocket to his uniform shirt — a small but significant difference signifying maleness.

Shachar, now a lieutenant in the Israel Defense Forces, spoke here Monday night at a gay pride month event at the Israeli Embassy, explaining in hesitant and nervous tones how he became its first transgender officer. (Active duty personnel in the IDF do not reveal last names.)

“This is the right of the whole world, to be free and to be whoever we want to be,” Shachar said, with an unmistakable nod to last week’s massacre at a gay nightclub in Orlando carried out by a man who pledged fealty to the Islamic State.

The mass shooting, which killed 49 people, hung heavy over the event. Also speaking was Omar Sharif Jr., the grandson of the Egyptian actor, who said the previous week had been a “nightmare” for him both as an Arab and a gay man.

Ron Dermer, Israel’s ambassador to the U.S.,  said he had asked himself in the wake of the massacre whether he should add gays to his designation of Jews as the “canaries in the coal mine” whose vulnerability signals threats to civilization.

“You are not alone,” Dermer said, addressing the LGBT community. “Israel stands with you.”

But the inaugural pride event at the embassy, including Shachar’s participation, was planned long before the Orlando massacre. The event was celebrating the Israeli army’s evolution in its treatment of gay and transgender soldiers.

Since the 1960s, Israel’s military has been progressive by default: Excluding gays from service never made sense in a small country facing a perpetual threat. Transgender people are banned from the U.S. military, though Defense Secretary Ashton Carter last year enacted a de facto moratorium on dismissals and created a working group to study the issue.

For Israelis, it seemed baffling that exclusion was the norm in the United States and Britain until recent years. If you had the skills and the willingness to save lives while risking your own, the country’s leaders reasoned, it seemed odd in Israel’s reality to fret about whom you liked to date.

Still, that didn’t mean the army was a bastion of openness. Gay troops reported harassment and in some cases were denied sensitive security clearance. Partners were denied benefits.

In the early 1990s, the Knesset passed laws granting gays full equality in the military and in other sectors, and a 2013 Times of Israel analysis showed the brass embracing the openness. Some of that trickled down to troops, while in other sectors anti-gay bias persisted.

How Shachar came out as a transgender male illustrates how, in recent years, the army is committed not just to removing barriers but to changing attitudes.

Shachar, soon to turn 23, enlisted five years ago, and struggled whether to do so as a man or woman. In the end he chose the latter, but on the bus ride to his training base from Bakum, the massive sign-in base in central Israel, he chafed at having to wear a woman’s uniform, which is cut differently and with one pocket, not two.

“It was the first and only time I wore a woman’s uniform,” Shachar told JTA in an interview before his appearance at the embassy event. “I rode in women’s clothes.”

Policy was policy, and he was unable to get his superiors at the training base to allow him to wear the men’s uniform. One of his commanders, however, came up with a compromise: Shachar would be permitted to wear the looser-fitting work uniform even when the more formal uniform was required. The work uniform, designed to withstand grease and dirt, is unisex.

“He beat the system,” Shachar said with a smile, referring to his commander, using Hebrew slang for soldiers who are adept at bypassing outmoded regulations.

Still, Shachar was concerned enough about attitudes that although his superiors knew his secret, he kept his gender identity a secret from his peers.

He performed well in the army’s behavior analysis unit, which advises the military on organizational and training issues, and his commanders recommended him for the officer’s course. While he was in the course, they advised him to come out to his peers.

“I realized this secret will be a problem if I want to have an open relationship with my soldiers,” Shachar said. As a male officer he must serve four years, with an option to extend.

A week before graduating, he came out to his fellow cadets. When he graduated, he was listed as a male on his certificate.

Shachar has begun hormone therapy and will undergo surgery, subsidized by the army – a function of Israel’s health system, which mandates insurance for gender change as essential.

Among the changes he has recommended, and which have been implemented: In Hebrew, a language with greater gender-specificity than English, personnel now speak of soldiers according to their gender identification rather than their birth gender. Commanders take into account whether transgender soldiers would prefer to sleep on or off base.

Transgender males join religious males as a minority entitled to a beard exemption. For transgender men, “a beard is part of your personality,” Shachar said, stroking his own.

And then there’s the uniform: Upon request, recruits will be handed a uniform according to their gender identity. For Shachar, that has meant two shirt pockets since he graduated the officer’s course.

“For me,” he said, “the difference was like between heaven and earth.”