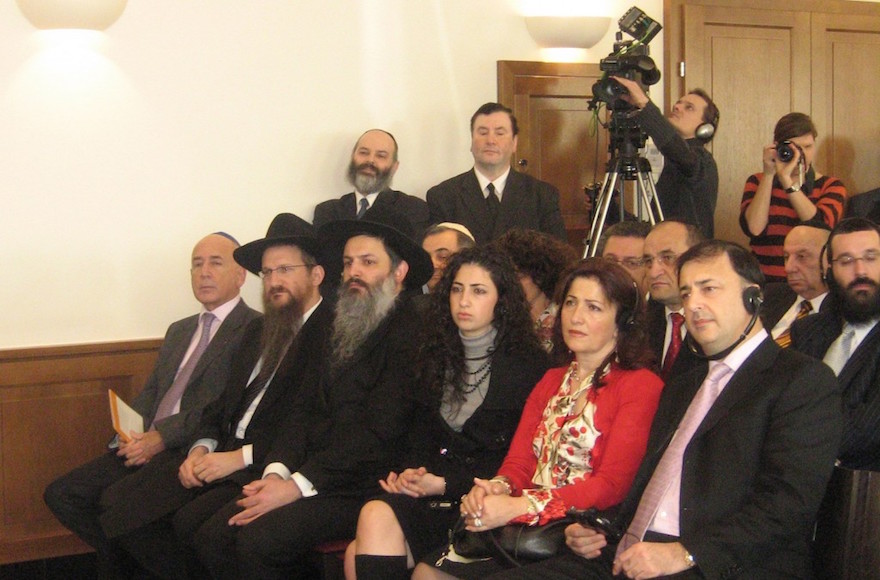 Funder Lev Leviev, front right, listens during a ceremony marking the opening of a Chabad center in Vienna, next to his wife and daughter and one of Russian's chief rabbi's, Berel Lezar, second from left, Feb. 18, 2007. (Cnaan Liphshiz)
Advertisement

NEW YORK (JTA) — New York police allegedly shut down a lane of the Lincoln Tunnel to escort Russian-Israeli billionaire philanthropist Lev Leviev, one of many favors allegedly provided to Jewish businessman Jeremy Reichberg and a partner in exchange for bribes.

Leviev — the president of the Federation of Jewish Communities in Russia and chairman of international real estate firm Africa Israel — was the unidentified business associate to get special treatment in an incident described in federal court papers filed Monday, a source told the New York Post, according to an article published Wednesday.

The incident in the Lincoln Tunnel, which links Manhattan and New Jersey, was one of many detailed in court papers that are part of a wide-ranging federal corruption investigation in which several New York police officers and three Orthodox Jewish businessmen have been arrested. Reichberg and three police officers were arrested Monday. Another Jewish businessman, Jona Rechnitz, pleaded guilty earlier this year and is believed to be cooperating with the investigation. He is a former employee of Leviev’s Africa Israel.

The probe is looking in part into allegations that police and officials traded favors to Orthodox communities and institutions for gifts and bribes.

According to the Post, New York Gov. Andrew Cuomo called for the state inspectors general and the Port Authority of New York and New Jersey launch a probe into the allegations of the lane closure, saying “If this is true, it is deeply troubling.”

“The NYPD has no jurisdiction within the tunnel’s boundaries,” Cuomo added. “If members of the Port Authority or PAPD [Port Authority Police Department] participated in any fashion – through purpose or neglect – the state will deliver immediate and severe consequences.”

The court papers did not say when the lane closure in the tunnel occurred.

Leviev, 59, is ranked 1,694th on Forbes’ 2016 list of the world’s billionaires, which said he is known as the “King of Diamonds.” He made his fortune in the diamond industry and currently owns mines in Africa and Russia, according to the post. He also owns and operates luxury jewelry boutiques in New York, London, Dubai and Singapore.

Born in Uzbekistan, Leviev, who is Orthodox, moved to Israel at age 15 and currently lives in London. He is a major supporter of many Jewish causes, including Chabad-Lubavitch, the Hasidic sect that focuses on outreach to Jews around the world.

Through his real estate companies, he has also been involved in Jewish settlement construction in the West Bank.

According to the Post, a lawyer for one of Leviev’s daughters denied that Leviev had received the police escort, saying Leviev “does not know Jeremy Reichberg.”