Israeli girl, 13, stabbed to death in her West Bank bedroom by Palestinian assailant 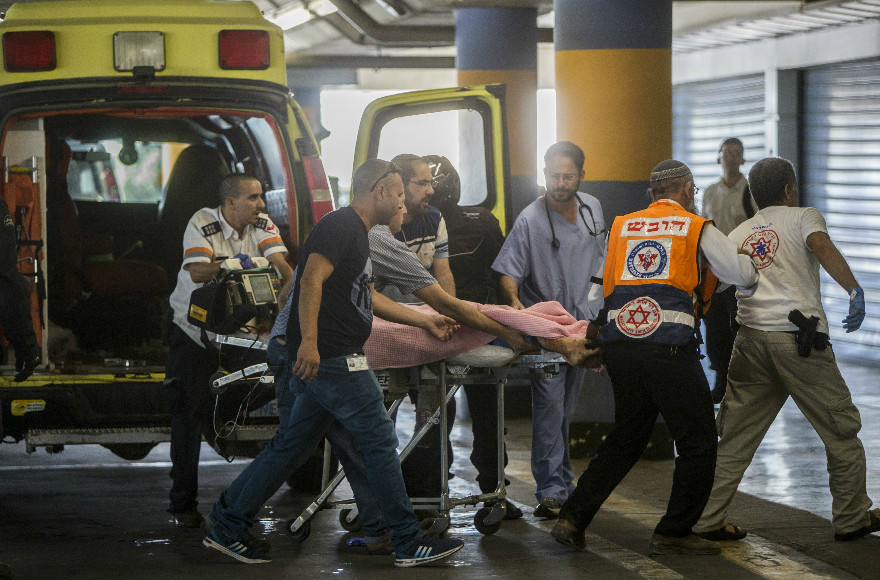 Medics wheel Hallel Yaffa Ariel, 13, who was stabbed by a Palestinian attacker in the bedroom of her Kiryat Arba home, into the emergency room of the Shaare Zedek Medical Center on June 30, 2016. She died of multiple stab wounds. (Photo by Yonatan Sindel/Flash90)
Advertisement

JERUSALEM (JTA) — A 13-year-old West Bank girl was stabbed to death by a Palestinian teenager while she was asleep in her bed.

Hallel Yaffa Ariel of the Kiryat Arba settlement was stabbed several times and died of her wounds at a Jerusalem hospital, where she reportedly arrived unconscious and not breathing on Thursday morning.

A civilian guard of the community located adjacent to Hebron was stabbed while struggling with the attacker and also sustained gunshot wounds, with the Israeli media reporting that he was shot accidentally by other civilian guards who arrived at the scene.

A photo released by the Israel Defense Forces showed the bloodstained bed, pillows and rug in the girl’s room.

13-yr-old girl wounded in stabbing attack has succumbed to her wounds. pic.twitter.com/H00mKr6XJp

The attacker was identified as Muhammad Nasser Tarayrah, 17, of the village of Bani Naim, adjacent to Kiryat Arba, the Palestinian Maan news agency reported. He reportedly jumped over the fence to enter the settlement; the private home is located near the settlement’s security fence.

The breach set off an alarm and guards were already heading to the area when the attacker started stabbing the teen, according to reports.

Meeting after the attack, Israeli Prime Minister Benjamin Netanyahu and Defense Minister Avigdor Liberman decided to close off the village where the assailant lived and revoke work permits in Israel for members of his village. They also launched the process to demolish his family home.

“The horrifying murder of a young girl in her bed underscores the bloodlust and inhumanity of the incitement-driven terrorists that we are facing,” Netanyahu said in a statement. “The entire nation deeply identifies with the family’s pain and declares to the murderers: You will not break us.”

Netanyahu said he expected the Palestinian leadership to “clearly and unequivocally” condemn the attack and to take immediate action to stop the incitement.

The U.S. State Department issued a statement condemning the murder ” in the strongest possible terms.”

“This brutal act of terrorism is simply unconscionable,” the statement said. “We extend our deepest condolences to her family. We also understand another individual who was responding to the attack was wounded by the attacker. We extend our hopes for a quick and full recovery.”

Lars Faaborg-Andersen, the head of the European Union office in Israel, tweeted: “Strongly condemn terror murder of Hallel Yaffa Ariel in Kiryat Arba this morning. No excuse for terrorism – LFA”.

Sari Bashi, the Israel and Palestine country director for Human Rights Watch, in a statement sent to journalists called the murder a “ghastly crime. The fact that settlements are illegal under international law does not make their inhabitants, the children as well as their parents, subject to lethal attack.

“At the same time,” she said, “the killing provides no legal justification for the Israeli government to punish the alleged attacker’s family members.  Destroying the home of the attacker’s relatives and canceling their work permits is an unlawful collective punishment, causing suffering for family members who committed no crime.”