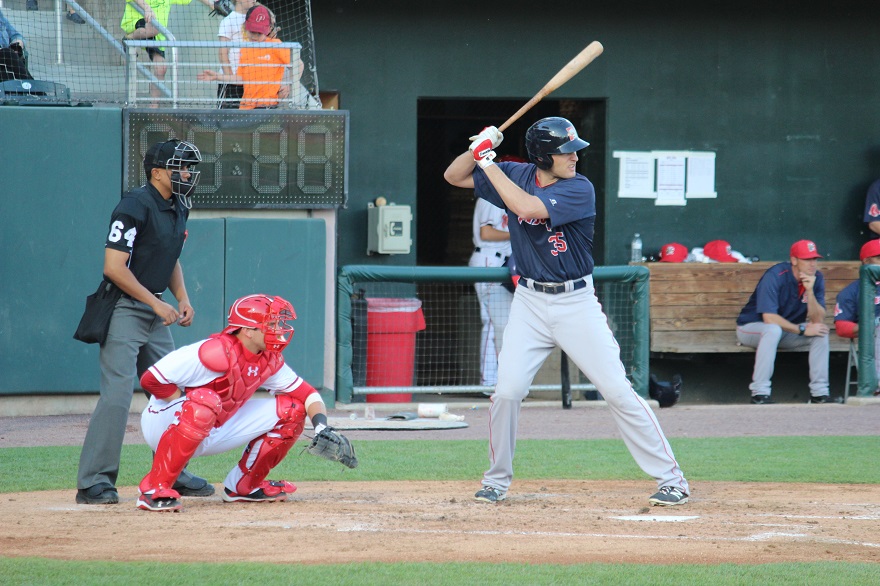 Nate Freiman at bat for the Portland Sea Dogs in a game against the Harrisburg Senators in Pennsylvania, May 2016. (Hillel Kuttler)
Advertisement

HARRISBURG, Pa. (JTA) – Taking a seat on the dugout bench of the Portland Sea Dogs, Nate Freiman politely dismisses the premise that he pines to return to the major leagues.

Maybe it’s a defense mechanism now that he’s two seasons and three organizations removed from his last appearance in the bigs. But Freiman, dripping sweat from pregame batting and fielding practice, projects sincerity in his gratitude for playing baseball professionally – all the more so for his hometown Red Sox’s AA affiliate in Maine, whose home games are driving distance from his parents’ home near Boston.

“I’m not here on a daily basis thinking about getting back to the big leagues,” said Freiman, 29, a first baseman who played for Israel’s entry in the World Baseball Classic in 2012. “I’m here thinking, ‘Let’s beat Harrisburg tonight, I’m going to have four or five competitive at-bats,’ and then at the end of the night, I’m going to think about what I did right and what I could’ve done better.”

Nearly three seasons ago, Freiman was a rookie trying to help the Oakland Athletics in their ultimately successful stretch run to reach the playoffs. But after the 2014 season he was released by the Athletics, his third organization, after being on its postseason roster.

Since then, Freiman has played in the minors for the Atlanta Braves, Washington Nationals and now the Red Sox. Amid the moving around, he and his wife had a son, William David, in November 2014.

“Where I want to be is just getting the chance to play,” the Washington, D.C., native said. “Anything else will take care of itself. They’re giving me the chance to play every day, and that’s all I can ask for. I’ve really enjoyed it. If you’re on the field playing with a uniform on, anything can happen.

“The expression that goes around baseball is that staying in the big leagues is the hard part, which implies that getting there is the easy part. By no means is that a reasonable thing to say. It’s results-based, there’s not a lot of room for error and there are a lot of people trying to get there. If you don’t get the job done, they’ll go with someone who will. That’s what we all know going into it.”

Not that playing in the majors lacked impact and import. 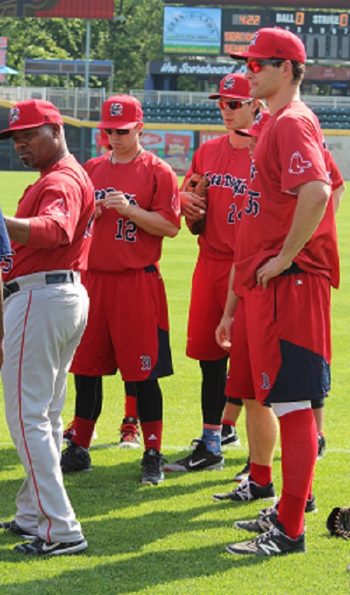 Nate Freiman, right, with some Portland Sea Dogs teammates and hitting coach Jon Nunnally, left, prior to a game, May 2016. (Hillel Kuttler)

“Being in the major leagues is an experience I can barely even describe,” said Freiman, an eighth-round draft pick of the San Diego Padres in 2009, adding, “To be on the playoff roster was awesome. It’s what we’re all working for, to get there and to try to get back.

“I have nothing but the best things to say about that organization,” he said of the Athletics. “I’m happy with my time there. Unfortunately, we hit the end of the road and it was time to move on.”

The Red Sox signed Freiman on May 10 following his release by the Nationals. In 44 games with Portland, where he is the regular first baseman, he is batting .260 with 5 homers and 25 runs batted in following a strong start.

But Freiman is making contributions off the field, too, with some veteran leadership.

Recently, while the Sea Dogs lounged in the clubhouse in Altoona while rain pelted the field, manager Carlos Febles called a team meeting with the club standing last in its division. Febles went around the room encouraging players to provide their input on how things were going.

When his turn came, the 6-foot-8 Freiman stood and talked. The others listened.

“He’s been in the big leagues, and that’s where everybody wants to go,” said Febles, who reached the show as an infielder with the Kansas City Royals. “Why not get him in front of the guys and talk about what they need to do to get there? It really was interesting to listen to him – the things he went through to get to the big leagues.

“I’d been talking to the players a lot, but sometimes it’s better to come from a teammate. At some point, you get sick of listening to the same thing from the coaches.”

“He was really big on that, backing us up,” Nunnally said, adding that Freiman “can talk to the guys and [they] look up to him.”

Freiman spoke “on a deeper level, a different perspective” from the rest, said pitcher Keith Couch.

“When you get to AAA, the majors, it’s a different animal,” said Couch, who not much later was promoted back to Pawtucket, the Triple A team for the Red Sox. “He’s a great team guy.”

As a newcomer to Portland, Freiman said he tread lightly because he wanted to fit in the first week or two and “become part of this team.” He said he’s never adopted an air of superiority for reaching the majors.

“There are some people on this team who will play in Fenway some day,” he said of the iconic home park of the Red Sox. “Hopefully I get there as well.”

If he doesn’t reach the Sox this season, Israel’s World Baseball Classic team could benefit. Its qualifying games are scheduled for late September, during the major league season but after the minors’ season concludes. Freiman was a standout for the squad of several years ago.

Baseball’s back: Here’s a look at 8 Jewish major leaguers and a manager

Nate Freiman’s big year: Slugging for Israel to chasing a pennant in the big leagues